Catch Day 3 highlights and cricket scores of second South Africa vs India Test, being played at the Wanderers Stadium, Johannesburg. South Africa were 118/2 at the close of play. 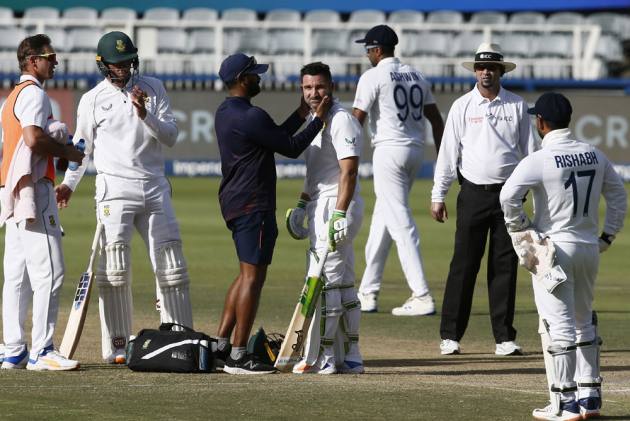 It not only moved but also put South Africa on the precipice of a first-ever series defeat against India at home. Then, the Proteas fought back. That's how the so-called moving day played out on Wednesday at the Wanderers Stadium, Johannesburg. India set a tricky 240-run target after being bowled out for 266 in their second innings on Day 3 of the second Test. Cheteshwar Pujara (53) and Ajinkya Rahane (58), both fighting to save their respective spots in the team, played two classy knocks in the morning but departed in quick succession soon after hitting fifties. Hanuma Vihari (40 not out) then shepherded the tail to add crucial runs. In between, Shardul Thakur, who claimed a seven-wicket haul on Day 2, played some lusty shots for his 24-ball 28. At the close of play, South Africa were 118/2 (40), still needing 122 runs. India need eight wickets. Proteas skipper Dean Elgar, who put his body in the firing line, was unbeaten on 48 off 121 balls. And giving him support was Rassie van der Dussen (11 not out off 37). For India, Shardul Thakur and Ravichandran Ashwin got the wickets. Get highlights of SA vs IND here:

Poor Dean Elgar. Takes another one. This time, his fingers are in the firing line. A Shardul Thakur snorter hits his right glove. Meanwhile, Mayank Agarwal seen walking gingerly with the team physio at the boundary. South Africa need 127 runs. SA - 113/2 (36.2) 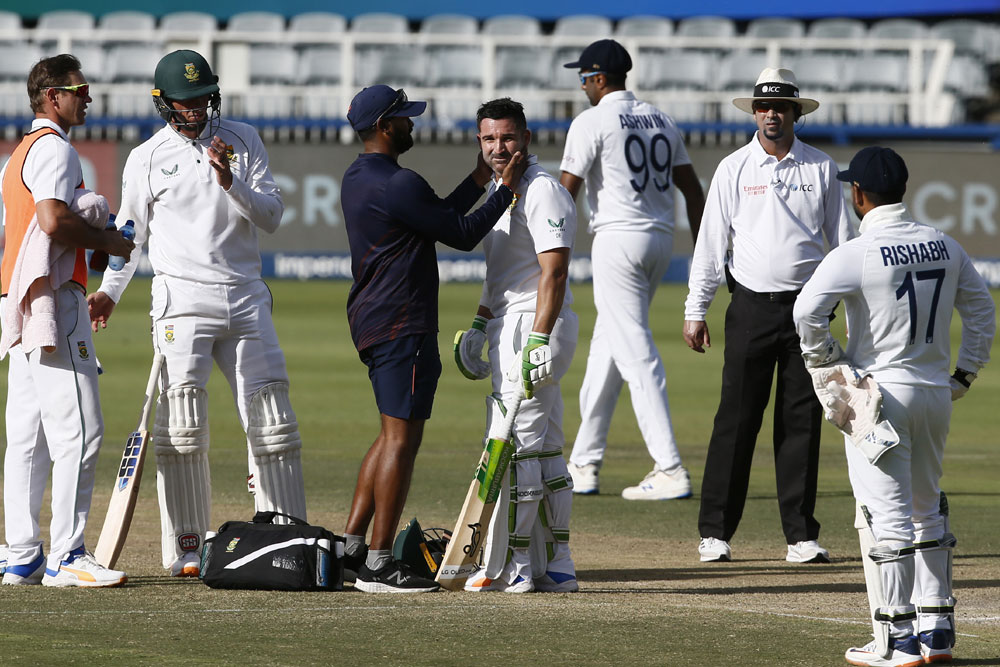 Nasty. A well-directed bouncer from Jasprit Bumrah hit Dean Elgar on the shoulder and ricocheted to the grill. Elgar having medical attention. He continues and another bouncer. Terrorising. South Africa need 141 runs. SA - 99/2 (31)

Overcast conditions and Ravichandran Ashwin with his first over. Three from it. South Africa need 158 runs. SA - 82/1 (22)

Well, Shardul Thakur is a busy man and he's making a lot of noises, the right ones. He convinces KL Rahul to take a review, LBW against Aiden Markram. But the ball's missing the leg stump. Then, he gets it right in the next delivery. Markram is trapped in front. He goes for 31 off 38. South Africa need 193 runs. Keegan Petersen will be the next man. SA - 47/1 (10)

Jasprit Bumrah with the final over before tea. Aiden Markram's having issues with his bat. It gets hit, rather than playing, at the toe. And an edge for a four and it's tea. South Africa need 206 runs. SA - 34/0 (7)

Jasprit Bumrah continues. Dean Elgar gets a thickish outside edge off the first ball and gets his first four. The Proteas skipper hits the last ball to mid off, forcing a hamstrung Mohammed Siraj to run. A couple. South Africa need 215 runs. SA - 25/0 (5)

The last time these two sides met at the Wanderers, India won by 63 runs after setting a 241-run target. And the highest successful 4th innings chase at the venue is 310 by Australia in 2011-12 season.

Duanne Olivier with his 12th over. Hanuma Vihari hits the fifth ball for a four, over cover. Then another one to backward square leg. And he is shielding Mohammed Siraj. The pacer has faced only one ball in a 22-ball last-wicket stand. India lead by 239 runs. IND - 266/9 (60)

Lungi Ngidi gets his first in the innings. Jasprit Burmah swings but gets a top-edge and is caught by Marco Jansen. He goes for seven of 14. Mohammed Siraj is the last man. He is fit enough to bat. India lead by 218 runs. 245/9 (56.2)

Jasprit Bumrah finally opens his account, in some style, with a six over backward square leg. Hanuma Vihari gets a top-edge off the fifth ball and four. Kagiso Rabada's figures: 3/77 in 20 overs. India lead by 218 runs. IND - 245/8 (55)

Now some spice. Jasprit Bumrah copes another one and he's having a verbal duel with Marco Jansen. Umpires get involved. Yesterday, Jansen was at the receiving end of this little, blossoming rivalry. A maiden over. India lead by 203 runs. IND - 230/8 (54)

Marco Jansen gets his third. Another one straying down leg and caught behind. Mohammed Shami goes for a six-ball duck. India lead by 201 runs. Jasprit Bumrah is the new man. IND - 228/8 (51.5)

Marco Jansen with his 13th over. Shardul Thakur gets a top-edge off the second and it sails over long leg boundary for a six. He follows it up with a beauty of a lofted drive for a four. Then, and pulls the fifth for another four. Five fours and a six in 23 balls for Thakur. The ball is damaged. And Thakur goes for 28 off 24... holes out. Catch taken by Keshav Maharaj at deep square leg. 41-run stand in 40 balls. India lead by 198 runs. IND - 225/7 (50)

Shardul Thakur is taking on Marco Jansen. Three fours in the over, including a brutal cut to backward point off the fifth. And 200 up for the visitors. India lead by 174 runs. IND - 201/6 (46)

Players are back for the post-lunch session. Kagiso Rabada to resume the proceedings. Hanuma Vihari on strike. He is unbeaten on 6 off 26. Shardul Thakur is his partner in the middle. India's lead is 161 runs.

A cracker from Ravichandran Ashwin. Backfoot punch for a four off the third to sweeper cover for a four. Marco Jansen can only admire it. India lead by 152 runs. IND - 179/5 (42.3)

Kagiso Rabada tests Rishabh Pant with a nasty bouncer, softening. And the very next ball, Pant charges down and is caught behind. He goes for a three-ball duck. Ravichandran Ashwin is the new man. India lead by 140 runs. IND - 167/5 (38.3)

Cheteshwar Pujara given LBW out. India take the review. No bat involved, and it's hitting middle. Kagiso Rabada gets his second. Pujara goes for 53 off 86. Rishabh Pant is the new man. India lead by 136 runs. IND - 163/4 (37)

Kagiso Rabada resumes proceedings after drinks and he strikes. A 111-run stand in 143 balls is broken. Ajinkya Rahane undone by a rising delivery, caught behind. He goes for 58 off 78. Hanuma Vihari is the new man. India lead by 128 runs. IND - 155/3

India scoring at a brisk rate. Seven fours and a six this morning. The two India veterans, fighting to save their respective spots in the team, are batting with gusto, and are in a 93-run stand from 113 runs. Cheteshwar Pujara reaches his 32nd fifty, in 62 balls. Ajinkya Rahane is batting on 43 off 63 balls. India lead by 110 runs. IND - 137/2 (30)

Cheteshwar Pujara and Ajinkya Rahane are having their time in the middle. The duo combined for four boundaries while Rahane upper cuts Marco Jansen for the first six in the morning. IND - 112/2

Lungi Ngidi (SA): On this wicket, one needs to stick to the line outside off and bring the slips into play. Maintaining consistency will be the strategy today.

Two men, whose Test futures are under the scanner, face the challenge of building India's lead on Day 3 of the Wanderers Test in Johannesburg.

Cheteshwar Pujara and Ajinkya Rahane, whose top order contribution in recent times have been sub-par, are at in the middle and will aim to score the bulk of the runs after India lost both their openers rather cheaply on Day 2.

Rahane (batting on 11) and Pujara (batting on 35) have produced 41 runs in just 8.2 overs and have showed the right intent against the largely pace-oriented South African attack. The first hour's play will be important for the not out batsmen on Wednesday.

The onus is now on the Indian batsmen to force a win. India lead 1-0 in the three-Test series and if the visitors are looking South Africa in the eye at the Wanderers, it's because of Shardul Thakur, who recorded the best bowling for India against South Africa by taking seven wickets for 61 runs in South Africa’s first innings.

Shardul Thakur's previous best bowling figures were four for 61 against Australia in the second innings at Brisbane in 2020-21. India won that match.