Catch Day 1 highlights and cricket scores of second South Africa vs India Test match being played at the Wanderers Stadium, Johannesburg. In reply to India's 202, Proteas were 35/1 at the close of play. 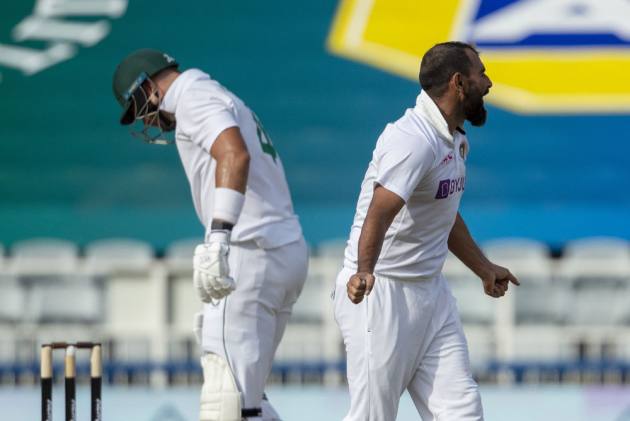 India and South Africa shared Day 1 honours at Wanderers Stadium, Johannesburg on Monday. A Virat Kohli-less India opted to bat first in the second Test after stand-in skipper KL Rahul won the toss. But the visitors, chasing their maiden Test series win in South Africa, managed only 202 runs in the first innings as Proteas pacers Kagiso Rabada, Duanne Olivier and Marco Jansen [READ: Day Stats] shared all ten wickets between themselves. Rahul hit a patient fifty (50 off 133) before Ravichandran Ashwin's quickfire 46 off 50. India then got the wicket of opener Aiden Markram, trapped in front by Mohammed Shami early in the innings. At the close of play, South Africa were 35/1 in 18 overs with skipper Dean Elgar and Keegan Petersen batting on 11 and 14 runs respectively. They still trail by 167 runs. There were worrying signs for India as Cheteshwar Pujara and Ajinkya Rahane once again failed with the bat. And towards the close of play, a hamstrung Mohammed Siraj walked off without completing hir fourth over. Catch Day 1 highlights of SA vs IND, 2nd Test here:

Mohammed Siraj pulls up in his delivery stride and is off the field. Shardul Thakur completes the over with a dot to Dean Elgar. A maiden. South Africa trail by 167 runs. One more over to go to stumps. SA - 35/1 (17)

Jasprit Bumrah with his seventh over. A maiden to Keegan Petersen. South Africa trail by 167 runs. Petersen and Dean Elgar added 21 in 73 balls for the second wicket. SA - 35/1 (16)

Massive shout for a caught behind against Dean Elgar from Rishabh Pant. But Mohammed Shami is quiet. Very close. South Africa trail by 174 runs. SA - 28/1 (10)

Mohammed Shami traps Aiden Makram. LBW for 7 off 12. A new form of dismissal for the Proteas opener but the bowler is the same. Bowled twice in Centurion, and now hitting the middle, but his legs in front. Bang in front. Three dismissals in three innings. Keegan Petersen is the new man. SA - 14/1 (3.5)

Down the leg side and Kyle Verreynne takes a fine catch. Mohammed Siraj (1 off 6) caught behind. Third for Kagiso Rabada. And India are all out for 202 in 63.1 overs. Jasprit Bumrah not out on 14 off 11. Session stats: 56 runs and five wickets in 12.1 overs

One big over. Jasprit Bumrah hits Kagiso Rabada for a four off the first ball, then a six off the third, and another four off the fifth. And India also reach 200. IND - 201/9 (62)

Marco Jansen gets his fourth. Ravichandran Ashwin misses a fifty by four runs. A skier and Keegan Petersen takes it comfortbly. Mohammed Siraj is the last man. IND - 187/9 (60.5)

And Duanne Olivier gets his third too. Soft dismissal. Shardul Thakur guides one to Keegan Petersen at the second slip. He goes for a five-ball duck. India tottering. Mohammed Shami joins Ravi Ashwin (27 off 29) in the middle. IND - 157/7 (55)

Players are back for the post-tea session. Marco Jansen to resume proceedings. Rishabh Pant to take strike.

And finally spin. Keshav Maharaj on with his first over. Ravichandran Ashwin hits the last ball uppishly for a four to extra cover boundary. And that's tea. 92 runs and two wickets in the session. IND - 146/5 (51)

Marco Jansen with this 12th over. Four byes off the last ball. His figures: 2/18. 24 runs for the sixth-wicket stand between Rishabh Pant and Ravichandran Ashwin. IND -140/5 (50)

A stunning close-in catch from Rassie van der Dussen to break 42-run stand in 91 balls. A bouncer from Kagiso Rabada and Hanuma Vihari (20 off 53) fails to control his defensive shot, and Rassie leaps to his left and plucks one out of thin air at short leg. Clean and squeaky. And drinks. Rishabh Pant will be the new man for India. IND - 91/4 (38.4)

Marco Jansen with his seventh over. Another maiden, his fifth, to Hanuma Vihari. 20 runs and two wickets in the last ten overs. IND - 60/3 (31)

Players are back for the post-lunch session. Marco Jansen to resume the proceedings. His figures: 1/2 in four. KL Rahul (19 off 74) will take the strike.

Duanne Olivier with the final over before lunch. And the Proteas breathing fire. Three big wickets, two of those to Olivier. And Elton John is belting out his 'Sacrifice'. Well, "it's a human sign, when things go wrong..." Virat Kohli is watching.

Wicket before lunch. Spongy bounce and it gets big on an out-of-form Cheteshwar Pujara. It balloons to Temba Bavuma at gully. Pujara goes for 3 off 33. A wicket for Duanne Olivier. Don't read into 'Mightie Devil'. Ajinkya Rahane joins KL Rahul. IND - 49/2 (23.3)

Marco Jansen strikes soon after the drinks break. Extra bounce and a feather of an edge. Mayank Agarwal is gone for 26 off 37. Kyle Verreynne gets a taste of Test wicket. Cheteshwar Pujara is the new man. IND - 36/1 (14.1)

KL Rahul and Mayank Agarwal survive some close calls, including a review for LBW against the former in the 8th over. So far so good. IND - 34/0 (11)

Mayank Agarwal and KL Rahul are opening for India. Agarwal goes into the business straight away with three fours. India 13/0

KL Rahul becomes the first Indian captain since Mohammad Azharuddin in 1990 to lead India in Tests before doing so in limited-overs internationals.

Regular India captain Virat Kohli pulled out of the second Test against South Africa at the last moment due to an upper back spasm. Kohli, who has been battling a prolonged lean patch with the willow, will thus not be able to complete his landmark 100th Test in the series’ third and final match at Cape Town.

KL Rahul (IND): Virat Kohli has had an upper back spasm and he is not playing in this Test. The physios are working on him and hopefully, he'll recover for the next Test. Hanuma Vihari replaces Virat.

Deal Elgar (SA): Losing Quinton de Kock is never ideal as he has been a big player for us. But we have got enough talent to back us. Kyle Verryenne replaces De Kock. Duanne Olivier comes in for Wiaan Mulder.

KL Rahul wins the toss for India and they will bat first.

After a huge storm last evening, the sun is out here in Johannesburg. The forecast looks clear for rest of the day.

The sheer gap in the quality of batting between India and South Africa was very apparent in the first Test at Centurion. Jasprit Bumrah, Mohammed Shami and Mohammed Siraj ran amok at SuperSport Park with their pace and movement. Given the conditions at the Wanderers in Johannesburg, the Indian pace attack should deliver again.

The pace and bounce at Wanderers have always worked in favour of the quick bowlers. South Africa, who are missing Anrich Nortje in this entire series, may play the promising Duanne Olivier, who missed the first Test due to a combination of injury and after-effects of COVID-19. Olivier has taken 24 wickets in his last three first-class games at Wanderers.

India are unlikely to change a fairly settled Playing XI. While there will be a question mark on both Cheteshwar Pujara and Ajinkya Rahane, the team management may not be in a mood to experiment in a Test match that could decide the series.

The toss will be important. India had won the toss and decided to bat first in Centurion. Virat Kohli will look to do the same and pile the runs. Kohli will remember that India had beaten South Africa by 63 runs in Johannesburg in 2018. But India lost the series 2-1. So this will be grudge time for Team India as well.