With 15 runs needed off the final over, David Miller smashed two maximums before a boundary by Kagiso Rabada to guide South Africa home against Sri Lanka in the T20 World Cup Super-12 match at Sharjah on October 30. Catch highlights of SA vs SL cricket match here. 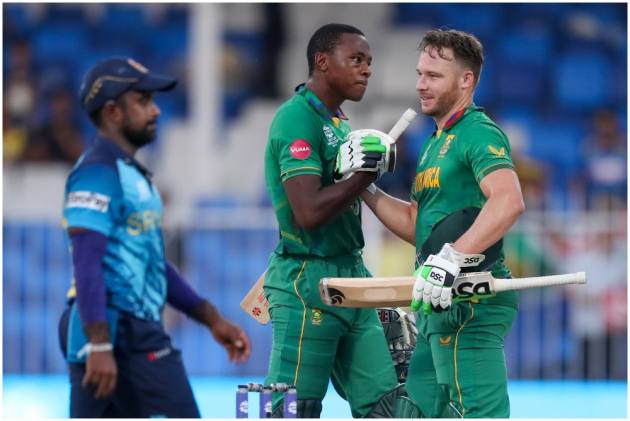 David Miller's 13-ball 23, which included two sixes in the final over, and Tabraiz Shamsi and Dwaine Pretorius's three wickets each helped their side South Africa beat Sri Lanka by four wickets at Sharjah cricket stadium on October 30. South Africa now have four points from three games, while Sri Lanka remain with two points from three matches. Put to bat, Sri Lanka batters struggled to settle in barring the lone warrior Pathum Nissanka. The opener dragged Sri Lanka to the 100-run mark. But just when he tried to go big, Pretorius dismissed him. Sri Lanka eventually folded on 142. The island nation made early inroads as Chameera got rid of both the openers Quinton de Kock and Reeza Hendricks. South Africa, too, began to fumble before their skipper Temba Bavuma played a captain's knock. The game tilted in Sri Lanka's favour as Wanindu Hasaranga picked up a hat-trick, dismissing Bavuma, Aiden Markram, and Pretorius. With 15 runs needed off the last over, David Miller hammered Lahiru Kumara for two back-to-back maximums. Kagiso Rabada finished off the match in style with a boundary.

19:10 PM IST: Tabraiz Shamsi is the Player of the Match

For his 3/17 in four overs, Shamsi is adjudged Player of the Match.  He says it is a special moment for him as it is his first player of the match award. He credits his teammates - Nortje, Markram, Miller, and Rabada - for playing their parts really well. Shamsi adds, "I haven't had a great number of chances previously, but I kept working hard. I was looking to do something special, try and win games for the country. The number one rank doesn't really matter for me. I'm just glad that I am bowling well. We have one of the finest bowling attacks in the world and I'm just happy to be part of it."

With 15 runs needed off the final over, David Miller does an Asif Ali with two maximums before taking a single to level the scores. Kagiso Rabada finishes off in style. A boundary past the keeper lits the South African dug out. South Africa 146/6 (19.5)

Just when it seemed South Africa have begin to settle in, Hasaranga de Silva dismissed Markram. Markram tried to play down but the ball knocks off his stump. South Africa 96/4 (15)

Temba Bavuma drives the ball to cover and starts to run. Van der Dussen reacts and leaves the non-striker's end. But Bavuma signals him to get back but van der Dussen is already down. Shanaka's direct hit fetches Sri Lanka another wicket. South Africa 49/3 (8)

Lots of running, blocking, and return catches complete the powerplay overs. Sri Lanka appealed for obstructing the field. The soft signal was not out. van der Dussen defended back to Lahiru Kumara but Lahiru threw the ball back to the batter's stumps. van der Dussen hit the ball with his blade to avoid getting hit on his body. The third umpire says the batter was in the crease and the action was instinctive.

Chameera puts South Africa on the back foot, with both openers back in the dugout. Sri Lanka go for a review and Hendricks is lbw. A ball later Quinton de Kock top edges and Chameera completes the catch. South Africa 26/2 (4)

Quinton de Kock and Reeza Hendricks are in the middle. Dushmantha Chameera with the ball. Pretty tight first over despite a no-ball. No harm done. Great start for Sri Lanka. South Africa 4/0 (1)

Nortje picks up two wickets and Sri Lanka are all out. On the back of Nissanka, Sri Lanka have done a great job but will it be sufficient? For that, you have to wait for the chase to begin. Sri Lanka 142/10 (20)

Dwaine Pretorius joins the party and dismisses Chamika Karunaratne and Pathum Nissanka in the penultimate over. Just when Nissanka was going big, Pretorius forces him to return to the dugout. Nissanka tried to go over deep midwicket but ended up getting caught by Nortje. Sri Lanka 131/8 (18.4)

A wide line off Pretorius fetches him the wicket of Dasun Shanaka. Shanaka hit the ball but the shot doesn't have that much power and Kagiso Rabida takes a catch at cover. Sri Lanka 100/6 (16.4)

Pathum Nissanka brings up his half-century off 46 balls. He drives the ball to the offside off Dwaine Pretorius. Nissanka is igniting this relatively boring Sri Lanka innings. Sri Lanka 94/5 (15)

Wanindu Hasaranga de Silva becomes Shamsi's third victim for the day. The Sri Lankan has holed out straight to long-on. What an outstanding spell for Shamsi. He completes his four overs with three wickets. Sri Lanka are struggling to reach 100 run-mark. Sri Lanka 92/5 (14)

Rajapaksa tries to play towards long-on but there is a thick leading edge. Shamsi takes a return catch. Sri Lanka 62/3 (9.3)

Nissanka is taking charge of the innings here. He smashes two maximums to Keshav Maharaj. But South Africa pulls one back again. This time it's a runout. Asalanka pushes the ball to midwicket and Nissanka calls for two but a fantastic throw by Rabada to the keeper finds Asalanka well short. Sri Lanka 61/2 (9)

Kusal Perera tries to pull off Nortje but the length ball goes in and flattens the middle stump. That's an early breakthrough for South Africa. Sri Lanka 20/1 (3.5)

Kusal Perera attempts to sweep off Markram but he is hit on pod. There is a huge appea for lbw but turned down. South Africa review! Perera was hit on the back pad and there is no bat involved. The ball is outside the line. Good decision by the on-field umpire. South Africa have lost their review. Sri Lanka 17/0 (3)

Sri Lanka's Pathum Nissanka and Kusal Perera are in the middle. Aiden Markram with the new ball. Good start for Sri Lanka, rotating strike on almost each delivery. Sri Lanka 5/0 (1)

Sri Lanka batters and South Africa take a knee. All eyes on Quinton de Kock. He kneels too. His head is bowed but doesn't raise his arm.

South Africa skipper Temba Bavuma confirms Quinton de Kock comes in for Heinrich Klaasen. Talking about the latest racism controversy, he says the team is feeling much better now and de Kock is in a much better state. He adds, "The first 5 overs will be key for us. We are expecting the pitch to be different here in Sharjah. We are expecting it to be a slow and low wicket."

Sri Lanka captain Dasun Shanaka says his team has played a couple of games at Sharjah so the "ball might keep low". He adds that bowlers and batters have been exposed to this wicket before, so that might be an advantage for us.

South Africa have won the toss and opted to field.

South Africa have beaten the island nation 11 times, while Sri Lanka have got the better of Proteas only five times.  In World T20 games, South Africa are 2-1 against Sri Lanka.

Hello and welcome to another T20 World Cup 2021 live coverage. All eyes will be on star wicketkeeper-batter Quinton de Kock who is likely to feature for South Africa today following his emotional apology on racism. On the other side, Maheesh Theekshana is expected to return for Sri Lanka as he has recovered from a side strain that kept him out of the playing XI during Sri Lanka's first match.