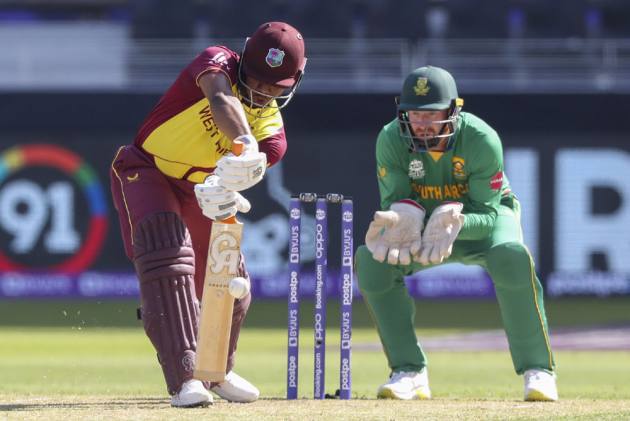 Defending champions West Indies suffered back-to-back Super 12 defeats as South Africa chased down a 144-run target with relative ease in their Group 1 match of ICC Men's T20 World Cup 2021 in Dubai on Tuesday. On a day Quinton de Kock also stole the show by pulling out of the match, apparently due to because of his stand on BLM (Black Lives Matter) movement, they produced an all-round performance. Rassie van der Dussen and Aiden Markram stitched an unbeaten 83-run stand in 54 balls for the third wicket to take the Proteas home after Dwaine Pretorius took three wickets in two wickets. Keshav Maharaj claimed a double. The eight-wicket win helped Proteas open their account in Group 1. They lost to Australia by five-wicket in the Super 12 opener, while the Windies suffered a six-wicket defeat after getting dismissed for 55. Windies next face Bangladesh, who lost to Sri Lanka in their opener, on October 29. South Africa take on Sri Lanka the following day. Both the matches will be played in Sharjah. Catch highlights of SA vs WI, ICC T20 World Cup 2021 match.

Andre Russell continues. Aiden Markram hits the third for a four, thanks to a Shimron Hetmyer misfield at deep. He oversteps. Another four off the last ball as Markram drives over cover. 12 from the over. South Africa need 11 runs in 18 balls. SA - 133/2 (17).

Dwayne Bravo with his second over. Four dots to Rassie van der Dussen, then one leg bye. Aiden Markram takes a single to end the over. Andre Russell conceded seven in the previous over. South Africa need 44 runs in 36 balls. SA - 100/2 (14)

Windies skipper Kieron Pollard introduces himself. Aiden Markram hits the last ball for a six over mid-wicket boundary. Nine runs from the over. South Africa need 53 runs in 48 balls. SA - 91/2 (12)

Akeal Hosein on with his final over. Rassie van der Dussen takes a single, then Shimron Hetmyer takes a sensational catch square leg to break a 57-run stand. Reeza Hendricks goes for 39 off 30. South Africa need 83 runs in 64 balls. SA - 61/2 (9.2)

Hayden Walsh with his second over. Five singles. 34 runs in the last five overs. And fifty-run stand between Reeza Hendricks and Rassie van der Dussen. SA - 60/1 (9)

Andre Russell gets his first over. Two singles, then a three as Reeza Hendricks plays the third to cover. A single, then a four to mid-wicket boundary. 10 from the over. SA - 36/1 (5)

Akeal Hosein continues. Reeza Hendricks hits the first for a six, over long on, then a four off the next, to mid-wicket boundary. 11 from the over. Rassie van der Dussen is the new batter for South Africa. In the previous over, Ravi Rampaul conceded two singles. SA - 17/1 (3)

Akeal Hosein with the first over. Temba Bavuma takes a single off the first. Two more singles, then a dot to Reeza Hendricks. A single, then direct hit at the bowler's end. And Bavuma is caught short. He goes for 2 off 3. Brilliant from Andre Russell at mid on. One-handed pick and hitting the target. Four runs and a wicket. Target - 144.

Dwaine Pretorius with the final over. On a hat-trick after taking the wickets of Kieron Pollard (26 off 20) and Hayden Walsh (0 off 1). But Dwayne Bravo hits the next ball, fourth, for a four. Seven runs and two wickets from the over. Pretorius' figures: 3/17 from in two overs. 48 runs and five wickets in the last five. WI - 143/8 (20)

Five runs and two wickets from the Anrich Nortje's final over. His figures: 1/14. Kieron Pollard and Dwayne Bravo are the unbeaten batters. WI - 136/6 (19)

Tabraiz Shamsi with his third over. A dot, then Kieron Pollard slog sweeps the second for a massive six. A single, then a straight down the ground. First six for Chris Gayle. A wide, then a couple of singles. 16 from the over. WI - 111/3 (16)

Anrich Nortje returns for his third over. Just two singles. 30 runs and three wickets in the last five overs. WI - 95/3 (15)

Kagiso Rabada returns for his third over. And ends Lendl Simmons' misery. Bowled. Simmons goes for 16 off 35. No boundary for the opener. Kieron Pollard is the new batter. WI - 89/3 (13.2)

Keshav Maharaj strikes again. Nicholas Pooran hits the second ball straight to David Miller at long off. He goes for 12 off 7. Chris Gayle is the new batter. WI - 87/2 (12.2)

Keshav Maharaj on with his third over. Evin Lewis hits the second ball for a six, over long on. Then the wicket. Kagiso Rabada takes a tough catch at deep to send Lewis back for 56 off 35. Nicholas Pooran is the new man. WI - 73/1 (10.3)

Keshav Maharaj on with his third over. Evin Lewis hits the second ball for a six, over long on. Then the wicket. Kagiso Rabada takes a tough catch at deep to send Lewis back for 56 off 35. Nicholas Pooran is the new man. WI - 73/1 (10.3)

Tabraiz Shamsi on with his first over. Evin Lewis hits the fifth for a six, over midwicket boundary and fifty for the left-hander in 32 balls. Three fours and five sixes. Nine from the over. WI - 65/0 (10)

Keshav Maharaj with his second over. Three singles, and fifty up for Windies. Evin Lewis marks it with a six, over long on. Nine from the over. WI - 56/0 (9)

Anrich Nortje continues. Three dots to Lendl Simmons, then a single, The Windies opener is having a tough time in the middle, 8 off 21 without a boundary.  And two dots to Evin Lewis. One from the over. In the previous over, Keshav Maharaj conceded three singles. SA - 47/0 (8)

Anrich Nortje gets his first over. Evin Lewis hits the third ball for a four, then Heinrich Klaasen drops Lendl Simmons off the fifth. Ball wobbling! Proteas missing Quinton de Kock already. Seven from the over. WI - 43/0 (6)

Aiden Markram continues. Evin Lewis hits back-to-back sixes off the fourth and fifth balls, then a four to end the over. 18 from the part-time spinner's third over. WI - 36/0 (5)

Kagiso Rabada continues. Evin Lewis hits the fourth and fifth balls for four and six respectively. 12 from the over. In the previous over, Aiden Markram tied down Lewis for a maiden. 18/0 (4)

Kagiso Rabada with the second over of the match. Two runs from it. Four runs from the previous over, including a wide. WI - 6/0 (2)

For the first time, all South African players take the knee. Aiden Markram with the new balll. Lendl Simmons to take the first strike. Evin Lewis is his opening partner.

Last time these two teams met in a T20I match in July, South Africa beat the Windies by 25 runs. And the Proteas have a 9-6 head-to-head record from their previous 15 meetings.

"Quinton de Kock has made himself unavailable for personal reasons," said Temba Bavuma. In comes, Reeza Hendricks for South Africa. Hayden Walsh in for Obed McCoy in the Windies XI.

South Africa captain Temba Bavuma wins the toss, and elects to bowl first against West Indies. Both the teams have lost their respective openers.

Reeza Hendricks will need to score seven more runs to complete 1000 runs in T20 internationals. If he does, he will become the seventh South Africa player to do so.

Hello and welcome to another Outlook India coverage of the ongoing T20 Word Cup, this time it's South Africa vs West Indies.