In reply to Sri Lanka's 386, West Indies were struggling at 113/6 at stumps on Day 2 of the first Test in Galle. Catch highlights and cricket scores of the SL Vs WI cricket match. 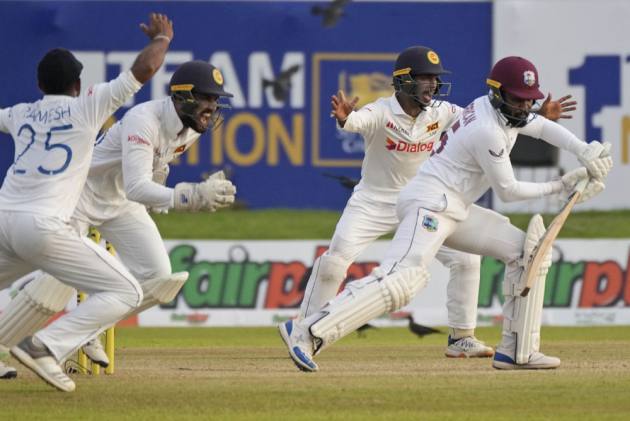 West Indies, chasing their maiden Test win in Sri Lanka, did well to dismiss the hosts for 386 in their first innings. Sri Lanka were 281/3 at the close of play on Day 1 of the first Test. But 24 hours later, the Windies found themselves in a web of spin, as always; and were struggling at 113/6 in 42 overs when the bails were drawn at the Galle International Stadium, Galle.

Windies started the reply on a confident note, with skipper Kraigg Brathwaite (41 off 115) and Jermaine Blackwood (20 off 44) posting 46 for the first wicket. Then all hell broke loose with Praveen Jayawickrama and Ramesh Mendis taking two and three wickets respectively after Lasith Embuldeniya removed Blackwood in the 21st over.

At the close of play, Kyle Mayers and Jason Holder were unbeaten on 22 and 1 with the Windies trailing by 273 runs. Earlier, overnight batters Dimuth Karunaratne (147) and Dhananjaya de Silva (61) got out early even as Dinesh Chandimal played a good knock of 45. Roston Chase completed a fifer with Jomel Warrican and Shannon Gabriel taking three and two wickets each. Catch Day 2 highlights and cricket scores of the first SL vs WI Test match, being played in Galle.

33 runs and three wickets in the last 60 balls despite back-to-back fours from Kyle Mayers. Nine runs from Ramesh Mendis' sixth over, who destroyed the Windies innings with three wickets. Roston Chase was the last wicket to fall (100/6 in 39.6). West Indies trail by 273 runs. WI - 113/6 (42)

Praveen Jayawickrama gets the wicket for Nkrumah Bonner for 1 off 11, caught by Dhananjaya de Silva at slip. Shai Hope is the new man. WI - 51/2 (23.5)

Praveen Jayawickrama and Lasith Embuldeniya are bowling in tandem. A single from Jayawickrama's third over. 22 runs in the last 60 balls as Windies openers Kraigg Brathwaite and Jermaine Blackwood stay ever vigilant. WI - 44/0 (18)

Dushmantha Chameera with his third over. Two singles from the over. Windies openers so far look comfortable. The post-Tea session started with a 10-run over with Jermaine Blackwood hitting for a Lasith Embuldeniya four and a six. WI - 30/0 (12)

Praveen Jayawickrama with his first over and an interesting one. He manages to incite enough interest for an LBW verdict against Kraigg Brathwaite off the last ball. But the Windies take the review and get it overturned. And with that, it's Tea in Gale. West Indies trail by 374 runs. WI - 12/0 (7).

Roston Chase completes a fifer with the wicket of Lasith Embuldeniya (17 off 18), caught by Jermaine Blackwood. Embuldeniya added 25 crucial runs with Praveen Jayawickrama (8). 31 runs and four wickets in the last ten overs. SL - 386 (133.5)

24 runs and three wickets in the last ten overs are West Indies dominate Sri Lanka after lunch. Lasith Embuldeniya (6 off 9) and Praveen Jayawickrama (0 off 5) are the unbeaten batters. Roston Chase and Jomel Warrican have taken four and three wickets each. SL - 367/9 (130)

Sri Lanka have lost Suranga Lakmal. Jomel Warrican is the man with the honours. But Sri Lanka have crossed the 350-run mark, which is by far quite a good score. Dinesh Chandimal is going strong. Sri Lanka 355/7 (125)

News coming in from West Indies dressing room. Shai Hope has been approved as debutant Jeremy Solozano's concussion replacement. Solozano was hit on his helmet while fielding at first slip on Day 1. He was taken to a hospital for scans.

Jeremy Solozano has suffered a concussion. He will return to the team hotel today and begin undergoing the appropriate protocol.

Dinesh Chandimal drives the ball to cover off Roston Chase and signals Ramesh Mendis for a single. With two new batters in the middle, Sri Lanka have successfully reached the 300-run mark. Sri Lanka 300/5 (103.1)

Roston Chase gets Sri Lanka captain Dimuth Karunaratne. That's the wicket West Indies have been looking for. Karunaratne has been stumped for 147. What an innings the Sri Lankan has played. But that's a big moment in the match for West Indies as the visitors have picked up two wickets in the first hour of the play. Both were set batters. Time for drinks now. Sri Lanka 296/5 (99.5)

Shannon Gabriel replaces Jason Holder. Gabriel delivers another no ball. But on the next ball gets well set Dhananjaya de Silva for 61. That's a big breakthrough West Indies have been looking for. Sri Lanka 281/4 (94.4)

Dimuth Karunaratne calls for a double off Jason Holder and brings up a century stand between him and Dhananjaya de Silva. The two Sri Lankans exchange a glove punch in the middle. Sri Lanka 271/3 (90.3)

Sri Lanka captain Dimuth Karunaratne and Dhananjaya de Silva, who are just short of a 100-run stand, are in the middle. Jason Holder with the ball. West Indies start the day with a maiden over. Sri Lanka 267/3 (89)

Welcome to Day 2 of the Sri Lanka vs West Indies 1st Test from Galle. Those who underestimated Sri Lanka, well they were forced to rethink after Sri Lanka dominated the Day 1 on Monday. It was captain Dimuth Karunaratne's show. He is standing tall at 132 not out along with Dhananjaya de Silva 56 not out. Let's see whether this day heads in the same direction as yesterday or West India produce some magic and stop the damage.

Day 1 belonged to Sri Lanka. The decision to bat first stood vindicated as the Lankan openers Dimuth Karunaratne (whose highest Test score is 244) and Pathum Nissanka did well to counter the West Indies attack without loss in the opening session, although Karunaratne was lucky to survive when he was on 14. The Caribbeans, who have never won a Test match in Sri Lanka, struggled to find breakthroughs and there was bad news when young West Indies debutant Jeremy Solozano was stretched off the field after being hit on his helmet while fielding at short leg. Two wickets in the final session gave West Indies a bit of cheer and the first session on Day 2 will pretty much decide how the match shapes up. Shannon Gabriel, who was preferred over quickie Kemar Roach, will have a lot of work to do. Galle's wicket is expected to dry up and will aid spin for sure. West Indies will bank on off-spinner Roston Chase (2/42 on Day 1) to do most of the damage. It's all set for another duel between bat and ball.