Ramesh Mendis' took 4/17 after first innings centurion Dimuth Karunaratne's 83 and Angelo Mathews' 69 not out helped Sri Lanka declare at 191/4 in the second innings. 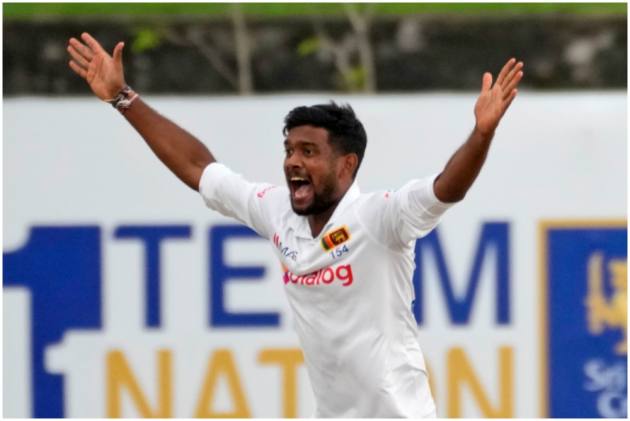 Day 4 of the first cricket Test between Sri Lanka vs West Indies on Wednesday is likely to determine the course of the Galle contest. A lot of overs have been lost on day 3 on Tuesday due to rain and there is a forecast for rain on Wednesday and Thursday. Day 4 started with rain but play started after a while and it has been a fruitful day as far as Sri Lanka were concerned both with the bat and ball.

That's it. The stumps have been drawn on Day 4 as Sri Lanka need just four lower-order wickets to win the 1st Test. With 156 runs first-innings lead, Sri Lanka started their second essay on a shaky nore before Dimuth Karunaratne and Angelo Mathews hit respective half-centuries before declaring at 191/4. Needing 348 runs to win, West Indies showed a poor account of themselves reeling at 52/6. Ramesh Mendis was the wrecker-in-chief for Sri Lanka with 4/17 in 11 overs. On Day 5, Sri Lanka need four wickets while West Indies require a miracle and 296 runs to win.

Bad light stops play. The skies are dark and Kumar Dharmasena thinks play can't continue. The players are walking back although it's not stumps in Day 4 officially.

What is this happening with the West Indies batting? Are we getting a result on Day 4 itself? Just like the first innings, Ramesh Mendis has once again performed brilliantly with the ball by dismissing Kyle Mayers and Jason Holder in the same over. West Indies 23/6, need 325 runs to win.

What a day Sri Lanka is having. Chasing 348 runs for victory, West Indies slump to 14/3. Lasith Embuldeniya and Ramesh Mendis with the wickets for Sri Lanka.

Sri Lanka have declared their innings at 191/4 leaving West Indies with 348 runs to win. Dimuth Karunaratne was out for 83 while Angelo Mathews remained unbeaten at 69. For West Indies, Rakheem Cornwall and Jomel Warrican picked up two wickets each.

100 up for Sri Lanka. Dimuth Karunaratne continues his fine form with the bat in the match with a fine 58 not out while Angelo Mathews (31*) is giving him able company. Sri Lanka 115/2, lead by 271 runs

Second wicket falls for Sri Lanka as Oshada Fernando got trapped in front by a Jomel Warrican delivery for 14. Veteran Angelo Mathews and first-inning centurion Dimuth Karunaratne are current at the crease. Sri Lanka 46/2 (14), lead by 202 runs

First with the bat, now with the ball, one can't keep Rakheem Cornwall out of action. He dismisses Pathum Nissanka for just 3, caught by Shai Hope. Sri Lanka 16/1 (6), lead by 172 runs in second innings.

That's it. Praveen Jayawickrama plumbs Shannon Gabriel in front for just 2. West Indie are all out for 230 in 85.5 overs. Sri Lanka take 156-run second innings lead. Jayawichrama shines with the ball for Sri Lanka with 4/40.

The play has finally started in Galle with Shannon Gabriel and Josua Da Silva looking solid against the new ball. West Indies 230/9 (84)

Good news from the ground. The covers are coming off. An inspection is expected soon.

Not the ideal sight for cricket lovers in the Island nation. There has been a steady drizzle since morning and is expected to remain cloudy for the rest of the day. There are also high chances of heavy rain interruptions during the course of the day. It's a no brainer we will have a delayed start.

Good morning all! Not the ideal sight first up in the morning. Steady drizzle as i tweet this. #SLvWI pic.twitter.com/17Skb6vucX

Hello and welcome once again on Day 4 of the ongoing Sri Lanka vs West Indies first Test match in Galle. After a powerpacked first two days, the third day's play was marred by rain.  The weather forecast has predicted rains on the final two days as well. Let's hope for the best.

West Indies have their backs to the wall in the Galle Test. In the 38 overs which were played on Tuesday, West Indies, who started at the overnight score of 113 for six, had a mixed day in the middle.

Bad light and a light drizzle has forced early stumps on day three.
WI on 224/9 trail by 162 runs.#SLvWI pic.twitter.com/uR2aHuBvvZ

Two crucial partnerships - 63 between Jason Holder and Kyle Mayers and 49 between Rakheem Cornwall and Joshua Da Silva -- gave some respectability to the West Indies innings.

Lankan spinners Praveen Jayawickrama and Ramesh Mendis have taken three wickets apiece but some resolute defending by Da Silva, who is unbeaten on 11 off 70 balls, kept the Caribbeans afloat on a day when three and a half hours were lost to the elements.

More rain is forecast on days four and five. If and when play resumes, Sri Lanka can take the new ball.