Lasith Embeldeniya (5/46) and Ramesh Mendis (4/64) ran through the West Indies second innings as Sri Lanka raced to 1-0 lead on Day 5. 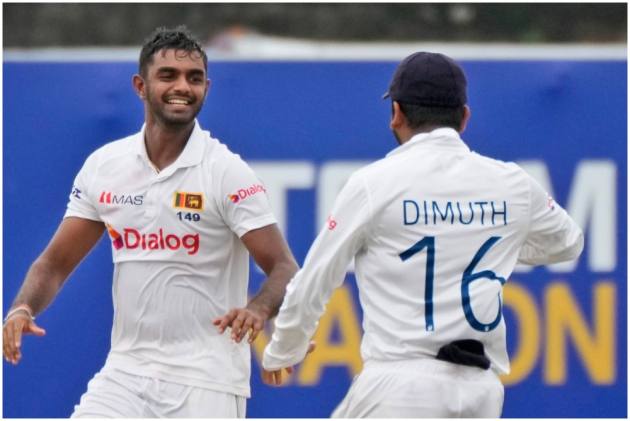 Joshua Da Silva and Nkrumah Bonner deserve all the credit for the fight they showed on the final day. The duo came together when West Indies were tottering at 18/6 in pursuit of 348 runs on Day 4 and stitched together a 100-run stand for the seventh wicket frustrating the Sri Lankan bowlers through the morning session on the final day. For West Indies, the only thing they wanted to save the match was some rain - which affected Day 3 and 4 -although it came some 10 minutes after the conclusion of the match. Lasith Embeldeniya (5/46) and Ramesh Mendis (4/64) did all the damage. Nkrumah Bonner remained not out for 68 from 220 balls. Joshua Da Silva scored 54. Earlier, batting first Sri Lanka posted 386 in the first innings, thanks to Dimuth Karunaratne ton. In reply, West Indies were all out for 230 giving the hosts a healthy 156-run lead. In the second innings, Karunaratne shined again with the bat scoring 83 as Sri Lanka declared their innings at 191/4. Get the highlights of SL vs WI here.

That's it. Sri Lanka win the first Test match in Galle by 187 runs against West Indies. Lasith Embeldeniya (5/46) finishes with a fifer while Ramesh Mendis (4/64) ended with four wickets.

West Indies losing plot here in Galle. Lasith Embuldeniya has Jomel Warrican caught by Oshada Fernando for just 1 run from 21 balls. Just a matter of time for Sri Lanka to go 1-0. West Indies 156/9. Nkrumah Bonner still hanging in the middle with an unbeaten 64.

Sri Lanka inch closer to win. Rakheem Cornwall gifts his wicket off the bowling of Praveen Jayawickrama for an unlucky 13. Jayawickrama punches the air in delight. West Indies 149/8

After Joshua Da Silva,  Nkrumah Bonner brings up his fifty. West Indies are really fighting hard. Meanwhile, Bonner was given a life when he was dropped by rival captain Dimuth Karunaratne at short mid-wicket off Ramesh Mendis. It was the second Mendis was denied a wicket today.

The resistance has been broken. Lasith Embuldeniya gets the danger man Joshua Da Silva, caught for 54. This was the moment Sri Lanka were waiting for the last 269 balls. Joshua Da Silva along with  Nkrumah Bonner put on 100 runs for the seventh wicket. Rakheem Cornwall comes in the middle. West Indies 118/7

Well deserved fifty for Joshua Da Silva. At a time when West Indies were looking not to cross the 50-run mark, the partnership of Da Silva and  Nkrumah Bonner has eaten over 250 balls. Incredible play by these two. West Indies 114/6

From 18/6 in 11.4 overs to 89/6 in 44 overs,  Joshua Da Silva and Nkrumah Bonner have produced strong resistance against Sri Lankan bowlers. The duo has played more than 200 balls for combined 72 runs.  West Indies need 255 runs.

Joshua Da Silva and Nkrumah Bonner are giving some really tough time to the Sri Lankan bowlers. The duo has played over 150 deliveries combined for just 40 runs.  West Indies 61/6 (34)

It's the final day here in Galle and rain is expected as per the weather forecast. West Indies have to play the spinners carefully.

Wicketkeeper-batsman Joshua Da Silva rescued West Indies from a complete collapse in the first innings. The 23-year-old from Trinidad once again some resistance to the Sri Lankan spinners who have tormented the Caribbeans in the first Test at Galle. But how long will this rescue act continue on a deteriorating Day 5 Galle pitch is the question.

Application has always been a problem with West Indies cricket in over a decade now. They were once again exposed by the Sri Lankans.

That West Indies have scored 52 for six wickets when bad light stopped play early on Wednesday is quite commendable. Da Silva and Nkrumah Bonner have so far featured in a 34-run stand off 13.5 overs. This, after West Indies were reduced to 18 for 6 in the 12th over!

Spinners Ramesh Mendis and Lasith Embuldeniya have been Sri Lanka's stars in this match. The hosts declared their second innings at 191-4 and set West Indies an unlikely 348 runs to win.