Catch Day 5 highlights and cricket scores of the second and final SL vs SL Test in Galle. Sri Lanka won the first Test by 187 runs and thus completed a series sweep against the West Indies. 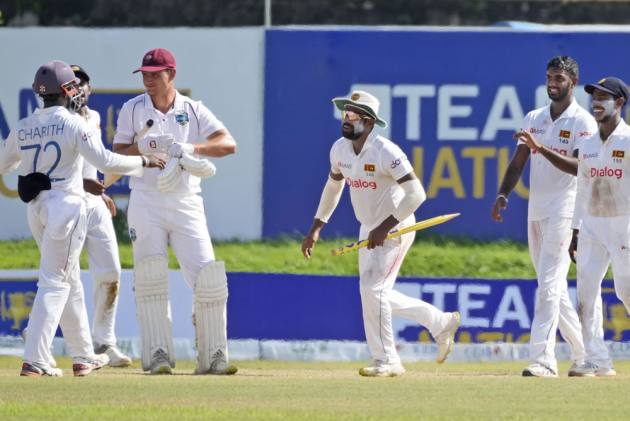 Sri Lanka completed a 2-0 series sweep of the West Indies on Friday with a facile 164-run win in the second Test in Galle. An unbeaten 155 from Dhananjaya de Silva helped Sri Lanka declare at 345/9 (121.4) and set a 297-run target for the Windies. Then the spin pair of Lasith Embuldeniya (5/35) and Ramesh Mendis (5/66) shared all ten wickets between them. Nkrumah Bonner top-scored for the visitors in the second innings as they lasted only 56.1 overs for 132 all out.  Sri Lanka won the first Test by 187 runs. Dhananjaya de Silva won the player of the match for his unbeaten 155 off 262 in the second innings, while Ramesh Mendis got the player of the series honours for his 18 wickets, including two fifers. Catch Day 5 highlights and cricket scores of the second SL vs WI Test match.

Kyle Mayers denies Ramesh Mendis a hat-trick. An outside edge. Nkrumah Bonner is unbeaten on 33 off 122. 20 runs and two wickets in the last 60 balls.

First over for Charith Asalanka. And a couple off the last ball as off-spinner makes a fine start. For the Windies, fifty-run stand for the second wicker between Jermaine Blackwood (36) and Nkrumah Bonner (22). West Indies need 232 runs. WI - 65/1 (30)

Ramesh Mendis strikes. He traps Kraigg Brathwaite in front for 6 off 21. Nkrumah Bonner is the new man. He joins Jermaine Blackwood. WI - 15/1 (7.4)

Jomel Warrican starts the proceedings on the final day. Lasith Embuldeniya hits the fifth ball for a four. Six from the over. SL - 334/8 (120)

Dhananjaya de Silva (153) and Lasith Embuldeniya (25) are already in a 107-run stand for the ninth wicket. And with Sri Lanka's lead approaching 300, a declaration from the hosts soon come.

First update from Mumbai. Toss has been delayed due to wet outfield.

Dhananjaya De Silva, who was unbeaten on a workmanlike 153 at stumps on Thursday, has effectively ended West Indies' hopes of winning a Test match in Sri Lanka. Coming in at a precarious situation when Sri Lanka had lost three wickets in their second innings and ahead of West Indies by only 23 runs, De Silva was the home team hero on Thursday.

De Silva's eighth Test century could not have come at a better time. But it was his ninth-wicket partnership of 107 with Lasith Embuldeniya that actually dented West Indian chances of a win in Galle.

For the first time in the series, West Indies had some hopes of a victory when they took the first innings lead but first Pathum Nissanka (66) and then De Silva, turned the home team's fortunes with some classy and lucky batting.

At close on Day 4, Sri Lanka (328 for 8) lead by 279 runs and are unlikely to make an overnight declaration. Whatever the target will be, West Indies will have a stiff total to chase and on a Day 5 Galle wicket, Sri Lanka will look up to off-spinner Ramesh Mendis (6 for 70 in the first innings) and left-arm spinners Praveen Jayawickrama and Lasith Embuldeniya to do maximum damage and cruise to a series win.