On yet another rain-affected day in Galle, Sri Lanka collapsed from 113/1 to 204 all out. West Indies were 69/1 at the close of play on Day 2 of the second Test. Catch highlights. 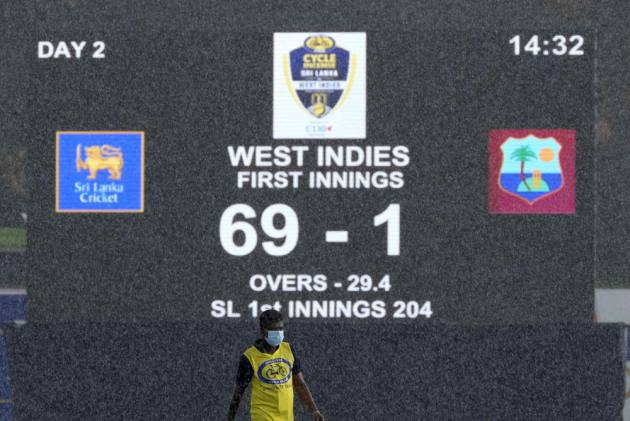 For the second successive day, rain played spoilsport in Galle. In reply to Sri Lanka's 204, West Indies were 69/1 in 29.4 overs when the play was called off on Day 2 of the second Test at Galle International Stadium. Kraigg Brathwaite and Nkrumah Bonner were the unbeaten batters, on 22 and 1 respectively. Praveen Jayawickrama removed Jermaine Blackwood (44) in the 28th over to break a 62-run opening stand. Windies were still 135 runs behind. Resuming the day on 113/1, Sri Lanka collapsed to post only 204 runs in their first innings. Veerasammy Permaul claimed a fifer while Jomel Warrican got four wickets. Catch Day 2 highlights of the second SL vs WI Test match:

Play has been officially called off for the day.

It's drizzle, but enough to spoil the play.

Praveen Jayawickrama with his ninth over, and we have another rain stoppage. Praveen Jayawickrama. 21 runs and one wicket in the last ten overs. West Indies trail by 135 runs.  Kraigg Brathwaite and Nkrumah Bonner are unbeaten on 22 and 1 respectively. WI - 69/1 (29.4)

Praveen Jayawickrama provides Sri Lanka with a breakthrough. He traps Jermaine Blackwood with the fourth ball. Crashing into leg stump. Blackwood goes for 44 off 99. Nkrumah Bonner is the new batter. West Indies trail by 142 runs. WI 62/1 (28)

Praveen Jayawickrama with his second over. A single off the last ball. Jermaine Blackwood and Kraigg Brathwaite are unbeaten on 31 and 12 runs respectively. West Indies trail by 159 runs. WI - 45/0 (16)

Lasith Embuldeniya continues. Eight runs from his fifth over, with Jermaine Blackwood hitting the first ball for a four. West Indies trail by 172 runs. WI - 32/0 (10)

No rain and players are back for the post-lunch session. Suranga Lakmal to resume the proceedings. Jermaine Blackwood and Kraigg Brathwaite are the Windies batters.

Jermaine Blackwood and Kraigg Brathwaite opening for West Indies. First maiden of the innings from Suranga Lakmal. He shares the new ball with Lasith Embuldeniya. WI - 2/0 (3)

Fourth for Veerasammy Permaul. He cleans up Lasith Embuldeniya for one off seven. Angelo Mathews, who walked off at drinks, is back to join Suranga Lakmal. SL - 187/8 (58.1)

Sri Lanka in trouble. Five wickets for 29 runs in the last ten overs as Jomel Warrican and Veerasammy Permaul take three wickets each. Suranga Lakmal and Lasith Embuldeniya are the unbeaten batters in the middle now. SL - 178/7 (56)

For a change, conditions look good for a timely start on Day 2.

9:20 AM IST:  Meanwhile, HERE's all you need to know about Indian Premier League retention. The deadline to retain players is Tuesday.

Sri Lanka batted first after a delayed start and then intermittent rain, only 34.4 overs were bowled on Day 1. Charith Asalanka made his Test debut for Sri Lanka, while West Indies made a couple of changes, with Veerasammy Permaul and Kemar Roach in for Rahkeem Cornwall and Shannon Gabriel. Sri Lanka started well with skipper Dimuth Karunaratne and Pathum Nissanka adding 106 runs for the opening stand. Roston Chase got the breakthrough for the Windies with the wicket of Karunaratne in the 31st over.

Sri Lanka have the momentum going into the second Test at Galle. For West Indies, it is a must-win game in the two-match series. The Caribbeans have never won a Test match in Sri Lanka.

The Lankans made a good start on Monday. Karunaratne and Pathum Nissanka (batting on 61) featured in a 106-run stand before the captain was caught and bowled by Roston Chase. Then bad light stopped play.

Galle has been a happy hunting ground for the Lankans. Lasith Embuldeniya took five wickets and fellow spinner Ramesh Mendis four as Sri Lanka dismissed the West Indies for 160 in a crushing 187-run victory in the first cricket Test last Thursday.

The West Indies made two changes to their team from the first match calling up fast bowler Kemar Roach for Shannon Gabriel and including left-arm spinner Veerasammy Permaul for off spinner Rakheem Cornwall.

Also, playing their first series in the ICC World Test Championship 2021-23 cycle, Sri Lanka will look for another win.