There are already 14 universities in the UK offering Sanskrit at undergraduate and postgraduate levels. 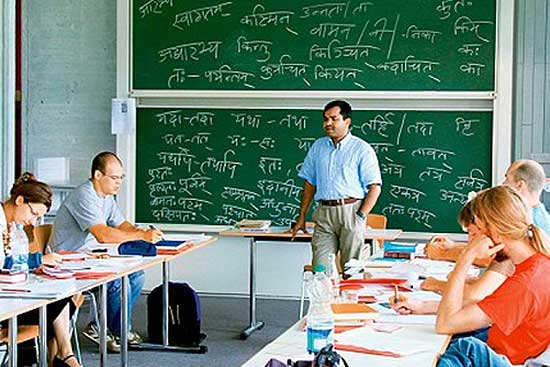 For quite a few years the interest in learning Sanskrit is growing in this country, and it surely has nothing to do with the change in government in India, lest anyone should so assume. There are already 14 universities in the UK offering the language at undergraduate and postgraduate levels. For over a year now City Lit, the largest adult education college in the heart of London's West End which offers over 5,000 part-time courses in areas such as languages, visual arts, music, drama and humanities has been mulling over the idea of offering Sanskrit, and now from September it will be introduced.

It is well-known that in this country there is a high degree of interest in classical languages. Francesco Bucciol, Head of Classical Languages and Civilisations, City Lit said, "Sanskrit is a great opportunity to discover a fascinating culture and learn the language that over the centuries evolved into Latin, Classical Greek and is at the basis of the Indo-European language family. We are starting this year with a beginner's class, but the number of courses will increase as our students progress." Rated 'Outstanding' by government inspectors Ofsted, City Lit is the only adult education college in the UK to offer Sanskrit.

The course will be taught by Rohini Bakshi who has an MA in Hindu Studies and Sanskrit from SOAS. She told me that she did a summer taster course attended by 21 students of whom only three were of Indian origin and one of Pakistani origin and most of the others were English. Excited about her new role, Rohini, who already teaches the language on a Twitter platform she founded, #SanskritAppreciationHour, believes Sanskrit "opens a window to state craft, politics, mathematics, astronomy and yoga, of course." It is this link that the language provides to modern life interests that makes the language so attractive. Her promise of the course is that at the end of the year students will manage to read the Bhagwad Gita on their own.

After doing the rounds and winning awards at several international film festivals Brahmin Bulls is releasing in the UK on September 11. It is about an estranged parent-child relationship, in this case, father and son, which strikes a chord in most people's lives. The presentation makes the film, which could be a familiar theme of cultural assimilation and intergenerational conflict, very fresh and different. In his debut, filmmaker Mahesh Pailoor turns the polarised father-son relationship of an Indian-American family into issues of loyalty and betrayal. As a debut film it's an accomplishment. With Roshan Seth's subtle acting as the father and Sendhil Ramamurthy (a heart-throb of many a women) as the son, their interactions were intense without being melodramatic. Though the film drags a bit at times, Pailoor and co-writer Anu Pradhan's family drama doubles as a coming-of-age metaphor, with both father and son, though adults, needing some growing up to do.

The British have a thing about proper etiquette in clothes and recently, a young friend who was a new entrant in the City, went to work in a navy suit and dark tan shoes. He got strange looks from his colleagues and by midday one of the top guns at the office sent an email around about dress code, which mentioned brown shoes and the etiquette of office dressing.

In London, there are unwritten rules of dressing. One is not to wear brown shoes at work in the City unless it's a Friday or the weekend and you are going to the country after work or have come into town from the country. Mind you, the ends of the shoe must be round and never pointed or cropped. Etiquette expert William Hanson says that to be counted as English you must literally be straight-laced. That simply means that shoelaces should be in straight lines. Next is the belt. Gentlemen's belts should be discreet. As for jackets, just the top button fastens a two-button one and just the middle one for a three-button jacket. And men ought to make sure the wristwatch is not on display at an evening event. A pocket handkerchief should be in a subtle plume and never in a straight line. Also, don't even think of taking off your jackets at any formal event. William points out that even ties give clues to your upbringing. A skinny tie is a sure no-no. Your shirt sleeves can be visible only when washing your hands in public lavatories. And never try owning a white dinner jacket, red bow tie, readymade bow tie, clip-on braces, novelty cufflinks, a single-breasted, four-button suit and tie clips. Get the lingo right too. It's an 'evening dress' and not 'black tie'. And, if you are a true Brit it is never a 'tuxedo'.?

Everyone has heard the acronym OCD, which means Obsessive Compulsive Disorder. Now, the British, who love acronyms as much as anyone else, have come up with a new one that also suggests a disorder, but one to do with the way people behave and dress. If you were referred to as a NQOCD, it might be a good idea to look in the mirror. The acronym simply stands for 'Not Quite Our Class, Darling', and is a Brit variation of the more common internet slang NPLU, or Not People Like Us. It's generally used in a snooty context, which the British, with their stiff upper lip and public school-oriented class system, are frequent users. They also tend to use "Darling" quite a lot in that hoity- toity way, so NQOCD makes perfect sense.