Love Letters Of A French President

As a collection of Francois Mitterrand's love letters are about to hit the stand, a re-look at his torrid affair and literary flair 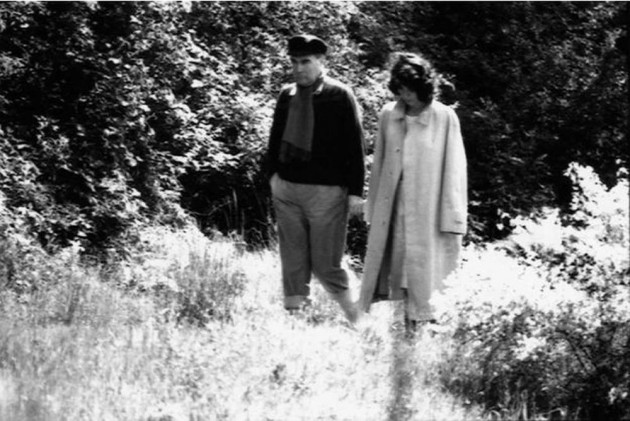 It was a cold December morning in Paris when Musee D’Orsay,  arguably the most popular museum in the city after the Louvre, was formally inaugurated.  The French President Francois Mitterrand did the honours and a photograph shows him listening intently to the curator Anne Pangeot, draped in an elegant red shawl, explain the importance of the exhibits.  Both of them acted their part and it would be almost a decade and a half later when their secret would be out.

The celebrity art historian and curator, 27 years younger than Mitterrand, was the President’s mistress . While the disclosure did not cause much of a stir ( French Presidents  are known  to be arden),  other details did surprise people.

The affair, for example, began when Mitterrand  was 46 years old  and she was barely  19. And once Mitterrand  became the President, it was revealed after his death,  he put her up in an apartment  overlooking the Seine  at French taxpayers’  expense. While she agreed to keep quiet about the affair, she insisted on a child, giving birth to a daughter Mazarine. Both were placed under the protection of  the President’s bodyguards and the President , who continued to live with his wife Danielle and their two sons,  spent the night with Anne and Majarine.

Now twenty years after his death as France prepares to observe Mitterrand’s  100th birth anniversary later this month, a book containing over 1,200 love letters written by Mitterrand to Anne is to hit the stands on October 13, on Thursday this week. Edited by Anne herself, the sneak previews have created a minor literary storm.  The French apparently cannot believe that the President they called the ‘Sphinx’  and ‘God’ for his reticence could write such passionate and erotic love letters as well. The pre-publicity has generated considerable interest across the English channel  as well and it is just a matter of time before the English translation comes our way.

The letters , what little has come out so far,  clearly sizzle even in translation. “O, the desire for your arms, your being, of the fire and the swell, the shout that leaves us on the edge of another world...,” reads a passage.  In yet another letter he wrote, “I love my hands that have caressed your body, my lips that have drunk of you…” .

Mitterrand’s wife Danielle apparently knew of the arrangement that her husband and Anne had. She herself had a ‘lover’ living at home , who was passed off as a  distant cousin.  And when Mitterrand died in 1996, she invited both Anne and Majarine to the funeral. The latter has herself written two books on her extraordinary childhood  and her father, who she was not allowed to call ‘Papa’  in public. In a diary published in 2010 she wrote, “ My mother is the heroine of a film that no one will ever see”.

Daniell’s  death in 2011 may have precipitated the publication of  the President’s  love letters to Anne, revealing  for the first time the depths of the extraordinary relationship.  The publishers are yet to reveal though if Anne also wrote as frequently and whether her letters too will form a part of the book.

The longest serving French President of the Fifth Republic, Mitterand  was responsible , along with Chancellor Helmut Kohl of Germany,  for initiating the European Union  and for pushing the project to build  the tunnel  below the English channel.  In a fascinating biography of his written by the former BBC correspondent at Paris Philip Short,  the French politician was credited with possessing ‘ breathless cunning and ruthless artistry’  and described as someone who could have seduced a stone.

A Paris based psychoanalyst  Ali Magoudi  came out with his own book and reproduced what Mitterrand  confessed to him on the couch. In a fascinating passage Mitterrand  is said to have confided that the then British Prime Minister Margaret Thatcher, who he said had the eyes of ‘Caligula’ ( Stalin according to some accounts) and the mouth of Marilyn Monroe,  had  forced him to reveal the secret code of  the French Exocet missiles that France had sold to Argentina.  The Falkland crisis was brewing and Thatcher wanted to neutralise the Argentinian missiles.

Mitterrand is said to have confessed to the psychoanalyst, “If our customers find out that the French wreak the weapons they sell, it’s not going to reflect well on our exports".  The confession is of  particular significance in view of leaks earlier this year that suggested that ‘secret’ configurations of the Raphael  jet fighters had been shared with at least two Asian countries by a rogue engineer.

With England poised to pull out of the European Union, yet another of Mitterrand’s  boasts made to the psychoanalyst  sounds ironical. "I will tie England to Europe, despite its natural tendency for isolation…I will build a tunnel under the Channel. Yes, I will succeed where Napoleon III  failed…”, Magoudi  quoted Mitterrand as saying.

The more one reads about Mitterrand, the more one is able to appreciate what Anne Pingeot  in an interview  several years ago said of her lover.  "There are so many people who are boring…to admire the person you love is an immense happiness…to love so much, never be bored…,”  she explained while speaking of the relationship.  Asked why Mitterrand  never  thought of  a discrete divorce and marry her, her disarming reply was that "He never gave up on any relationship".