Akhilesh Yadav's boys seem to be taking his love for cycling far beyond proportions. 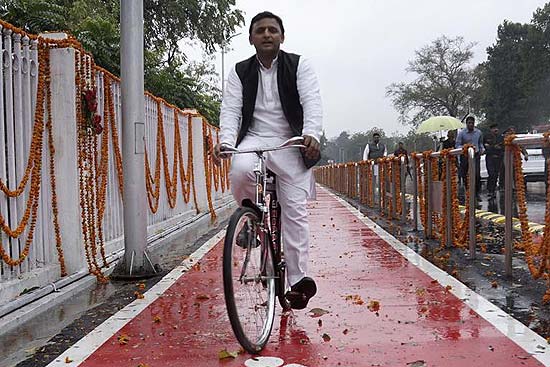 Uttar Pradesh Chief Minister Akhilesh Yadav appears to be taking his fad for the ruling Samajwadi Party symbol — cycle — a bit too far. The 41-year-old chief minister got so taken in by the cycling culture in Netherlands that soon after his return, he got down to building cycle tracks in Lucknow.
As if following the old dictum — charity begins at home — the first grand cycle track to be laid was right in front of the chief minister's official residence. Then followed all the roads in its VIP vicinity, where there was ample room to chop away part of the road for the purpose.
But the chief minister's boys on the job seem to be taking his love for cycling far beyond proportions. And now even the narrower roads or the city's main thoroughfares are being taken up for creation of cycle tracks — unmindful of the fact that pedaling would be no pleasure on roads clogged with automobiles, for which even the existing passage was not enough. The most glaring example is the city's busy shopping hub — Hazratganj .

Such indiscretion by officials can be halted by none other than the chief minister himself. Is he listening?

Crimes against women have been among the most formidable challenges before successive governments in Uttar Pradesh. And much lip service has been seen over the decades. It was therefore a pleasant surprise when the state machinery rose to the occasion to combat the malady of trafficking — within 12 hours of the issue being raised at a public function in Lucknow by Dimple Yadav, the elegant Lok Sabha MP, who is also the wife of UP chief minister Akhilesh Yadav.

No sooner than the youthful MP from Kannauj — better known as the city of perfumery - raised the issue at HT Woman of the Year award ceremony, her chief minister husband made it a point to put his own words of reassurance into action. And what followed within the next few hours was a meeting of top officials to chalk out a plan of action to fight the menace of trafficking.

And when actor Sushant Singh (a guest of honour at the function) sought to point out how trafficked girls mostly found their way into the brothels of Delhi's notorious G.B.Road red light area, Akhilesh promptly responded by assuring, "If that is the case, we will not hesitate to carry out raids in Delhi to free these helpless girls from such bondage."

Even as more than a month has passed since a 15-year-old class VIII student of the 170-year old La Martiniere College ended his life by jumping from a high parapet of the 19th century institution, effort is on by a strong lobby of armchair activists to twist the case into one of murder.

The innocent and simple parents of the boy have also been often dragged into the campaign led by a discredited serving IPS officer, who is out to establish himself as some kind of a pseudo crusader.

What is strange is that such a campaign was getting credence in a section of the media even though cops have been able to lay their hands on a suicide note, with handwriting experts confirming that the young boy alone was its author.

All said and done, the incident has not only provoked much debate and discussion; realising that the child was a victim of some kind of depression or tension, the college principal has displayed true sensitivity by setting up a special cell to identify and counsel other students who could be going through similar trauma.

If there was an award for a state with the highest number of holidays in a year, perhaps none could beat Uttar Pradesh. While that was always the case, the present government appears to have beaten all past records in declaring holidays at the drop of a hat.

The month of April witnessed a record number of 14 holidays. Besides the routine Saturdays and Sundays, what added to the list were birth or death anniversaries of "great people" of the yesteryears. A stage managed campaign was launched to seek declaration of former prime minister Chandrashekhar's birth anniversary as a public holiday.

And no sooner than the demand was raised from a particular quarter, the state government conceded to it. And just as the month of May approached, the same pressure group demanded public holiday on May 9, the birth anniversary of Maharana Pratap, the invincible Raja of Rajputana who single-handedly braved the might of the Mughals. The demand was conceded to, not because of the greatness of the Maharana, but because he happened to be a 'thakur'. Those lobbying for the holidays only described him as an embodiment of 'Rajput pride', not as a pride of the nation — which he truly was. Our netas really know how to undermine the stature of an unparalleled personage.

Incidentally, May 9 also happened to be the birth anniversary of yet another great soul - Rabindranath Tagore. But who cares? After all his lineage would not get the 'netas' their votes.