Lull Before The Storm

Results of the local body elections in Gujarat reflect the growing urban-rural disconnect and the state government's mishandling of agrarian issue and Patidars. 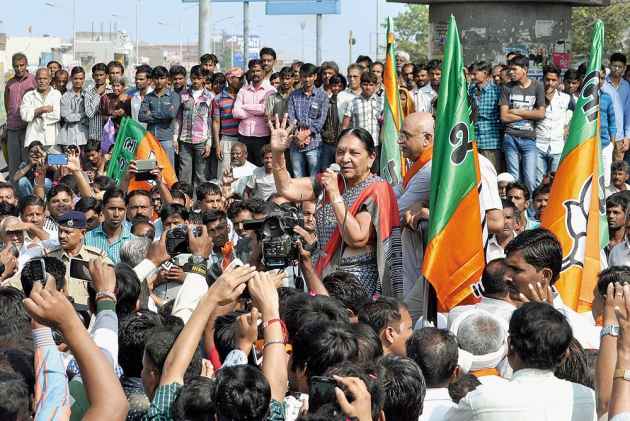 Soon after voting ended in the local body elections in Gujarat on November 29,the core group of the ruling BJP met at the official residence of chief minister Anandiben Patel in Gandhinagar for a final review. Present were ministers and key leaders helming various poll related responsibilities.

The sum and substance of the deliberations were that the party would be able to retain control of the six municipal corporations but was facing  a total rout in eight district panchayats while five could go either way. Similarly the party expected to lose about 100 to 110 tehsil panchayats, the chief minister was told, although the party hoped to bag about 35 municipalities.

Whatever the outcome, the core group decided that wherever BJP would win, celebrations should be so extensive and intense that the overall impact would not only overshadow Congress enthusiasts but also lift the morale of the BJP workers. Under no circumstances, it was decided, should a message go out that the 'Patidar effect' was the reason for the party's defeat.

The core group was bang on target and the ruling BJP did retain all the six municipal corporations when the results came out on December 2. But their assessment went completely haywire on district panchayats where Congress wrested 23 of the total 31 in the state. The BJP did better than expected in the municipalities, bagging 42 of the 56 though it was seven less than the 49 it held earlier.

Chief minister Narendra Modi in his almost 13-year- rule in Gujarat had built up a formidable table full of trophies for his party which included, besides a steamroller majority in the Vidhan Sabha, 30 of the 31 district panchayats, 192 of the 230 tehsil panchayats, 49 of the 56 municipalities and all the eight municipal corporations before he left for Delhi.

In Unjha town known as the cumin seed and isabgol capital of India and considered a Patel citadel, BJP could not put up a single candidate on its lotus symbol. In the town municipality elections, Independents swept the polls and 35 of the 36 elected representatives are Independents.

There are other interesting asides as well. Post Bihar, BJP's experiment of fielding 500 Muslim candidates failed in most of the places except Una. In Una, its Muslim candidates gave BJP 35 out of the 36 seats. A BJP Muslim lady candidate was the other solitary winner in the Rajkot municipal corporation. Another historic first is that women corporators (97) outnumber men(95) in the Ahmedabad Municipal Corporation. Interestingly 9 of the 11 wards of the Ahmedabad Municipal Corporation which had reported  deletion of names from voters' lists, numbering over one lakh and mostly of Patidars, have gone to the BJP.

These elections were considered crucial for a variety of reasons, more so in the backdrop of the BJP defeat in Delhi and Bihar. For one, over two-thirds of the state's electorate were going to cast their votes in these polls, so the results were expected to provide some indication of political fortunes after Narendra Modi's departure to Delhi. State Assembly elections are due in Gujarat in 2017, just two years before the next general elections in 2019. While BJP under Modi can afford to lose a state election, it can hardly afford to lose Gujarat.

The fact remains that a government headed by a Patel in Gujarat has alienated the staunchest BJP supporting community — the Patels — and while it may not have had much impact in cities, the countryside has given a very clear indication of where it stands. The BJP has been virtually wiped out in Saurashtra, North Gujarat and Central Gujarat regions. It could manage just Porbandar in Saurashtra and Panchmahals district in Central Gujarat. South Gujarat  proved a face-saver since it won Surat, Valsad and Navsari districts besides Kutch.

The results, besides bringing out the stark urban-rural divide and reiterating the age old stereotype of  BJP's  city-centric developmental profile, also highlight rural Gujarat's growing disenchantment over the government's handling of agrarian problems, growing unemployment and its penchant for handing over agricultural land for industrial use.

Finance minister Saurabh Patel, who was in-charge of Botad and Vadodara saw the BJP lose both these district panchayats. Similarly education minister Bhuepdrasinh Chudasama and social justice minister Ramanlal Vora failed to save Ahmedabad, Sabarkantha and the Aravalli as did transport minister Vijay Rupani in Rajkot. Karnali village in Vadodara district which was adopted by the Union Finance minister Arun Jatiley also chose to turn its back on the BJP.

While Congress is upbeat, with Gujarat Congress chief Bharatsinh Solanki describing it as a vote against BJP misrule, Chief minister Anandiben Patel has promised to go back to the drawing board to assess the reasons for the reverses in the countryside and make amends.

Solanki has reasons to be elated. It was when he was the state party chief earlier that the Congress had notched up over 50 seats in a Modi dominated Vidhan Sabha. This is the first electoral encounter between the two traditional rivals after Solanki took charge of the party in the state and the results for a hitherto comatose Congress have come as a shot in its arm.

For the chief minister, it is troubling times. Though all's quiet at the moment and silence dominates, it will not be long before the knives are out. It may well be a lull before the storm.