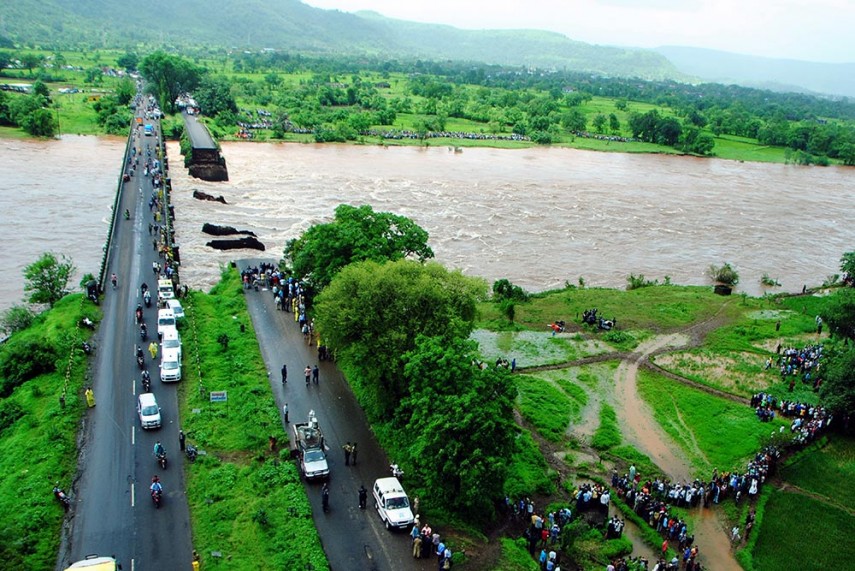 Before one could celebrate the strong and satisfactory monsoon until now, mishaps have started hitting the headlines, the gravest one being the collapse of a bridge on the Mumbai-Goa Highway. Of the 42 missing, 14 bodies have been recovered after the British era bridge on River Savitri collapsed. Built in 1928, it had been most recently certified "safe" last month by the highway authorities. The two buses and two private vehicles that were swept away in the strong river current are yet to be recovered. Chief Minister Devendra Fadnavis has ordered a judicial probe and the government has also declared a compensation of Rs 10 lakh each for the victim's kin. As politicians, media, bystanders, selfie-nuts and the relatives of the missing gathered at the accident site, Maharashtra housing minister Prakash Mehta and his workers attacked a journalist from a Marathi TV channel, who was reportedly asking questions about affixing responsibility for the mishap. As the statement issued by the Press Club Mumbai rightly says, "It is a case of shooting the messenger."

As different disaster management forces try to recover bodies, floods have disrupted normal life in other parts of Maharashtra. In Nashik, many have been evacuated. Compared to what is happening elsewhere in the state, the agonisingly annoying problem of potholes and vehicles jumping involuntarily every few seconds on Mumbai roads seems far less serious. And that trains are delayed every other day. But there is a silver lining, water levels have gone up considerably and four of the seven reservoirs that supply water to the city are now full.

During the past couple of days in the monsoon session of the Maharashtra Assembly, the uproar over demand for a separate Vidarbha and the rejection of the same has taken most of the time. Honestly, it is hard to tell who started the fight this time but it has gone on and ended predictably. After Shiv Sena protested and Aditya Thackeray took to Twitter to express his displeasure over a reported bill to divide Maharashtra and NCP proclaimed that the government no longer had the support of the ally and hence must go, the Congress also made similar noises. Chief Minister Devendra Fadnavis put the controversy to rest by declaring that he was the chief minister of "Akhanda Maharashtra" (Unified Maharashtra) and that there is no bill before the government seeking the division of the state. Political analysts have pointed that the same controversy erupts periodically disrupting the work when many pressing issues need to be debated and discussed.

But one can't be surprised about the behaviour of politicians at any level of governance. Especially if you look at the MLA report card released by the Praja Foundation, which says that 36% of people perceive MLAs to be corrupt, though it must be pointed out that it was an improvement from 2014 when 57% perceived their MLAs corrupt.

And just an aside, for some reason Jawaharlal Nehru Univeristy students' union president Kanhaiya Kumar wanted to attend one of the sessions and was refused entry despite having a valid pass.

Even as rage about ISIS increases manifold after numerous attacks across the globe, home-grown Zaibuddin Ansari aka Abu Jundal, said to be a handler in the 26/11 terror attacks and one of the main accused in the Aurangabad Arms Haul Case, was sentenced to life imprisonment along with six others. Of the 12 convicted, others were sentenced to 14 and eight years. The case dates to 2006 when the police had intercepted a vehicle with a huge consignment of RDX and ammunition such as AK-47 and bullets. The court has accepted the prosecution case that a conspiracy to avenge Godhra riots by eliminating Narendra Modi and Pravin Togadia was hatched by the accused. Eight have been acquitted. Jundal is said to have travelled to Pakistan via Bangladesh after this case and later was involved in the 26/11 attacks. 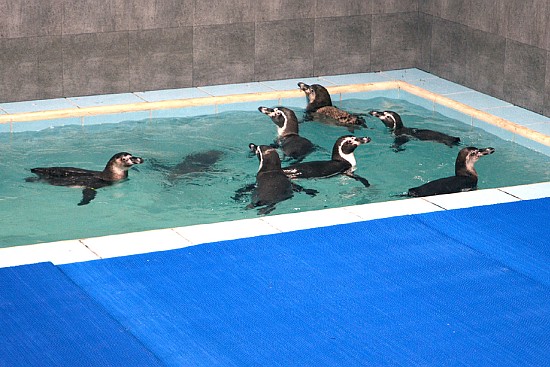 Much has been said about Mumbai enthusiasts who have pets like Siberian huskies but the city's one and only slightly dilapidated zoo has now got Humboldt Penguins, a first in India. Eight penguins arrived last month and are currently in their "cool off" period. As Congress leader Nitesh Rane wrote in a column for the Indian Express, "The natural habitat of Humboldt penguins is in South America along the Pacific coast. There, the cold current flowing in from Antarctica creates a nutrient-rich environment that they can survive in. Humboldt penguins are tremendous swimmers. In nature, they dive up to 150 metres underwater and swim up to 20 or even 30 miles per hour. At the Byculla zoo, in comparison, they will have the space of what can probably be considered the equivalent of a bathtub for a human. Can you imagine being jailed in a bathtub all of your life?" If you ask Mumbaikars, they might reply in the affirmative after living like sardines 24/7 but do the poor penguins have to live like that?

Mention two magic words, speed and trains and Bambaiwallahs are super excited. Even if the suburban trains continue to stop in the tracks more often than not (and this time Central Railway barely has had a clean day without delays), the ‘successful' trial of the high-speed Talgo train, for Delhi-Mumbai journey, makes us happy. Although the Spanish-made train, that is supposed to take less than 13 hours to cover the 1,300-km distance (for which Rajdhani currently takes 16 hours) arrived three hours late in Mumbai because of heavy rains, it is said to have achieved its peak speed at 130km/hour at some point. It is not clear when the service will start, but it would be nice to see if some passengers, who have to take flights at unearthly hours (and that too now from T2 terminal, which sometimes takes forever), to travel to Delhi, would switch to the super-comfy Talgo train. Good idea to catch up on those power naps and reading, no? Can't wait to Talgo.