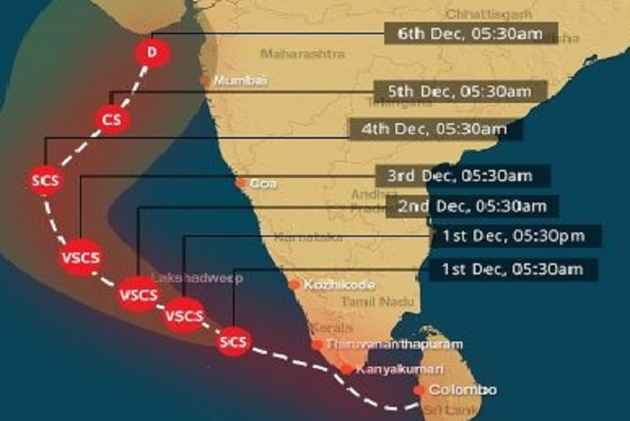 After crossing Lakshadweep on Sunday, cyclone Ockhi today in the afternoon has moved towards Maharashtra and Gujarat, reported IMD officials.

The cyclone originated near the coast of Sri Lanka and travelled hugging the coasts of Tamil Nadu and Kerala towards Lakshadweep claiming 19 lives in Kerala in its wake. It has now moved towards Maharashtra and Gujarat.

"Maharashtra and Gujarat are on high alert as cyclone Ockhi has changed its path in the afternoon today. In the next 24 hours heavy to heavy rainfall is expected in both the state," reported IMD.

The India Meteorological Department (IMD) has issued an alert today, warning fishermen against venturing into the sea as coastal areas are likely to experience strong winds, reported The Indian Express.

On Sunday, the Maharashtra Chief Minister’s Office tweeted that 28 more boats carrying 321 fishermen had docked along the shores of Ratnagiri. “23 from Tamil Nadu, 3 from Kerala & 2 from Karnataka. They are now docked at Mirya Bunder, Ratnagiri. All are safe now and officials are looking after them with utmost care,” the CMO tweet said.