People Thronging Tourist Hotspots Is A Major Cause Of Concern As COVID Is Not Over: Centre

Negligence increases the risk of spread of infection, the government said, expressing concern over visuals of crowded places with people not following COVID-19-appropriate behaviour and social distancing. 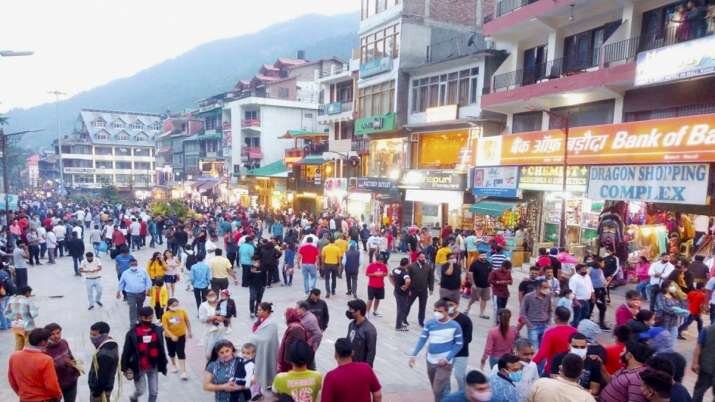 The Centre on Friday vividly emphasized on the fact that the pandemic is far from being over. People flouting COVID-19 protocols and overcrowding the  tourist hotspots is a "serious cause of concern".

According to the Centre, the latest case tally suggests that Maharashtra and Kerala constituted a whopping 53 per cent of total COVID-19 caseload registered in India last week.

People's negligence towards abiding by the protocols increases the risk of transmission, the government said, expressing concern over visuals of crowded places with people not following COVID-19-appropriate behaviour and social distancing.

In a press conference, Joint Secretary in Health Ministry Lav Agarwal said, "The country is still dealing with the second wave and we need to introspect if we can afford the misplaced belief that COVID-19 is over."

NITI Aayog Member (Health) V K Paul said visuals from tourist spots and the way people are mingling without following Covid protocols is "a serious cause of concern" and that such negligence will increase the risk of virus spread.

"We cannot lower our guard and there is no place for complacency," Paul said.

Expressing his concern over the sight of crowded places with people not following COVID-19 norms, Prime Minister Narendra Modi said on Thursday that there should be no space for carelessness or complacency and that a single mistake would have far-reaching impact and may weaken the fight against the pandemic.

Presenting a video doing the rounds where hundreds of tourists thronged the Kempty Falls in Mussoorie in Uttarakhand, Agarwal said, "Is it not an open invitation for COVID-19 virus to infect us! Spread of infection in the community is linked to our behaviour."

Eighty per cent of the new Covid cases in India are being reported from 90 districts across 15 states and union territories, including Maharashtra,  Kerala, Tamil Nadu, Odisha, Andhra Pradesh, Karnataka, indicating the need for focussed attention in these areas, Agarwal said.

"Fifty-three per cent of the total cases of COVID-19 in the country last week primarily have been reported from two states -- Maharashtra (21 per cent) and Kerala (32 per cent) -- which is a cause of concern," he said.

"We are coordinating with the states to control the spread of infection through intensive containment measures," he added.

He also said 66 districts across 17 states and UTs reported COVID-19 positivity rate of more than 10 per cent in the week ending July 8.

Agarwal also referred to recent spikes in cases in some countries, including Russia and the UK, to caution people against lowering their guard.

The UK witnessed an increase in the average daily new cases after EURO2020 football matches.

In Bangladesh, more new cases in the third wave have been noted as compared to the second wave because of which the government has imposed nationwide lockdown in the country, he said. Agarwal also presented examples of South Korea, Russia and Indonesia.

Paul, in response to a question, said the reduction in cases were earlier sharp but now the pace of slowdown has reduced which shows that one should not take the "situation for granted".

"The number of cases being reported now are still one third of what was in the first peak. We have realised it too. The war is not over, the second wave is not over. It is more visible in some districts and two particular states and smaller states in the Northeast and so long it is still rising, the nation is not safe," he said.

"We have seen in the past that there is localised predomination in some areas and the situation exploded and this is a warning to us that we should help accelerate this process of decline of this wave effectively to a much lower level to the baseline and the baseline has not been achieved," he added.

Paul further said pregnant women should take COVID-19 vaccines as they are safe and effective against the infection and stressed that the guidelines for vaccination of pregnant women have been issued after deep discussions and evaluation of scientific data.

"Scientific data is in favour of pregnant women receiving the three vaccines that we have," Paul said.

Pregnancy does not increase the risk of COVID-19 infection, but pregnant women are at an increased risk of severe illness from COVID-19 in case they get infected, he said.

"Additionally, pregnant women with COVID-19 are at increased risk for preterm birth and might have an increased risk of other adverse pregnancy outcomes including higher chances of neonatal morbidity," he said.

The government further said no case of Lambda variant of COVID-19 has been reported in India so far.

The cumulative vaccine doses administered in the country has crossed 37 crore.

Responding to a question on some states complaining of vaccine shortage, Agarwal said vaccines are distributed evenly with states.

"It is a well calibrated process we are undertaking. As we move forward, things will ease up and more vaccines will be made available but I urge that vaccine availability in the private sector must be utilised optimally and we should encourage and help people to receive vaccines from private channels too," he said.