Angry dalit protestors hit the street in several districts of the state, creating much tension in the area. 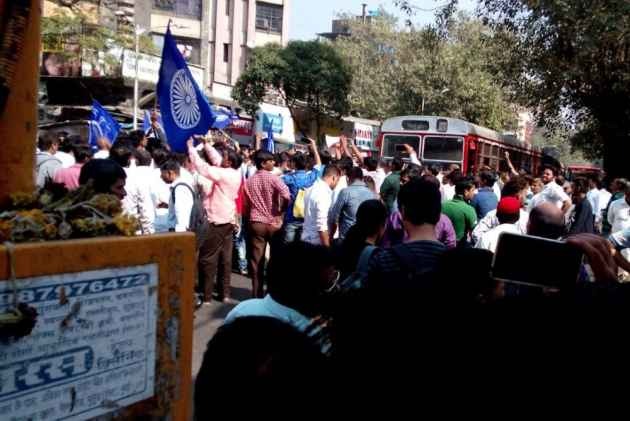 While Maharashtra is on edge in the wake of the statewide bandh called by the dalit outfits protesting against the violence at Bhima-Koregaon, the Congress party has moved an adjournment motion notice in the Parliament today.

Angry dalit protestors hit the street in several districts of the state, creating much tension in the area. They even halted buses, auto-rickshaws at Lal Bahadur Shastri Road in Thane.

The Western Railways authority has confirmed that the administration and security forces are making all efforts to normalise the train operations in the state.

Number of school in Thane has also shut down considering "the safety and security of students."

"It was left for the parents to decide if they want to send their children to school, hardly 50 students came today. So now we are even sending them back home, teachers will also leave thereafter," said a teacher at Mumbai's Young Ladies High School.

Posters were also seen at Abasaheb Garware College in Pune supporting bandh and a slogan of 'No practicals, lectures today'.

Apart from this, commuters have been left stranded due to lack of mode of transport in the state today. Scores of people were witnessed waiting near Thane's Vartak Nagar.

"There are very less auto-rickshaws and buses on roads today. This is troublesome for the entire state, particularly people who have to go to offices" said a commuter waiting for transport at Thane's Vartak Nagar.

While the auto- rickshaws drivers said that they have no other way than to support the protest as they are scared of loss.

The bus service towards Pune's Baramati and Satara and inter-state bus services from Karnataka-Maharashtra have been temporarily suspended till further order as a precautionary measure.

To prevent further damage the administration has also suspended internet services in Aurangabad.

Communist Party of India (CPI) leader D. Raja has given zero hour notice in the Rajya Sabha over "increasing atrocities against Dalits" and Congress MP Rajni Patil has moved adjournment motion notice in Rajya Sabha under rule 267 in the wake of protest.

Earlier in the day, the protestors halted the trains at Thane railway station pertaining to the same.

Violence spilled over to adjoining parts of Maharashtra after clashes broke out between the Dalits and alleged right-wing groups on January 1, during the bicentenary celebration of the Bhima-Koregaon battle near Pune.

The right-wing groups were objecting to the observance of 'Victory Day' since they considered it to be an anti-national celebration.

Both RSS and BJP are being accused of instigating the violence by opposition leaders.

In the battle, which was fought between the British East India Company, containing Dalits in its infantry, and the Peshwas, who were upper-caste Brahmins, at Koregaon Bhima on January 1, 1818, the Marathas ultimately withdrew. Since then, the lower-caste communities have been viewing it as a symbolic victory for themselves.