Slotting right in between the city-friendly Ertiga and the well established people mover Toyota Innova Crysta, here's what Mahindra’s shark-inspired MPV looks like inside out 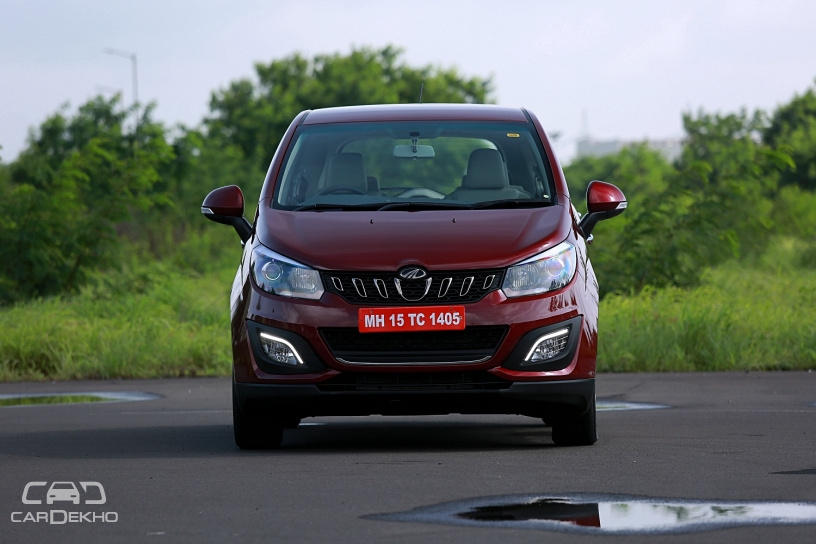 Mahindra has launched the Marazzo MPV at prices ranging from Rs 9.99 lakh to Rs 13.90 lakh (ex-showroom pan-India). The Marazzo bridges the gap between the Maruti Ertiga and the Toyota Innova Crysta, not only in terms of size but price as well. Let’s take a look at what the Marazzo packs and how it looks in some detailed images. 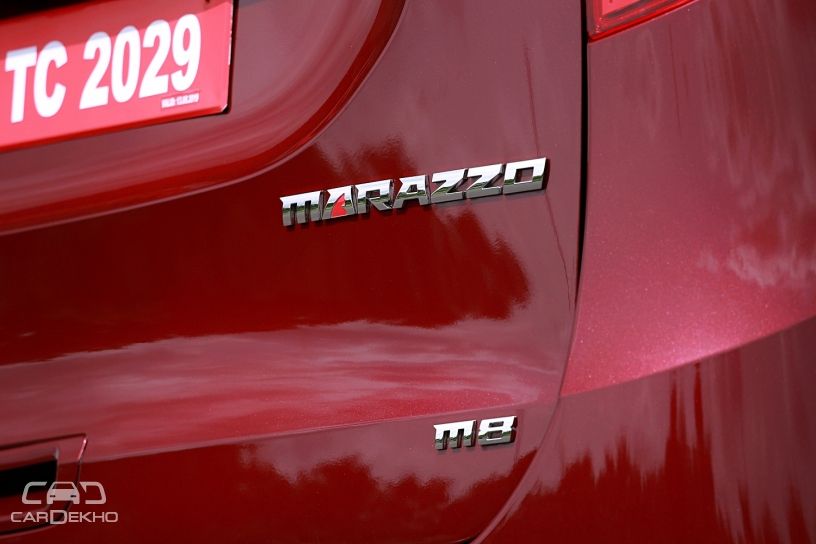 The Mahindra Marazzo is available in four variants: M2, M4, M6 and M8. All the images here are of the top-spec M8 variant.

From the front the Marazzo is unmistakably a Mahindra, thanks to the typical grille with shark teeth-like chrome inserts. Adding a hint of ruggedness is the dual-tone bumper that also houses fog lamps with LED DRLs. 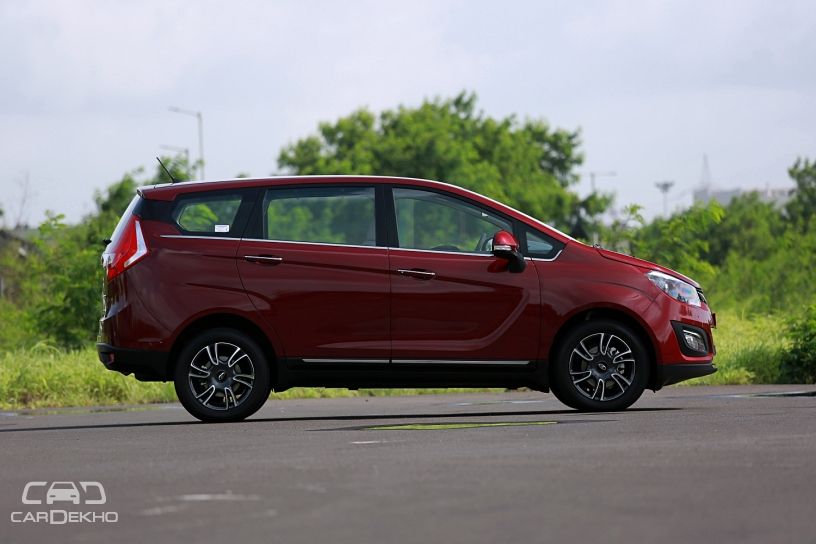 The Marazzo is 289mm longer than the Ertiga and 140mm shorter than the Innova Crysta. However, it has a wheelbase of 2760mm, which is 10mm longer than that of the Innova Crysta. The Marazzo’s rear overhang is on the longer side (to offer more legroom in the third row, hopefully) but it doesn’t look too much out of proportion. You also get sleek chrome highlights on the lower end of the doors and on the window line. 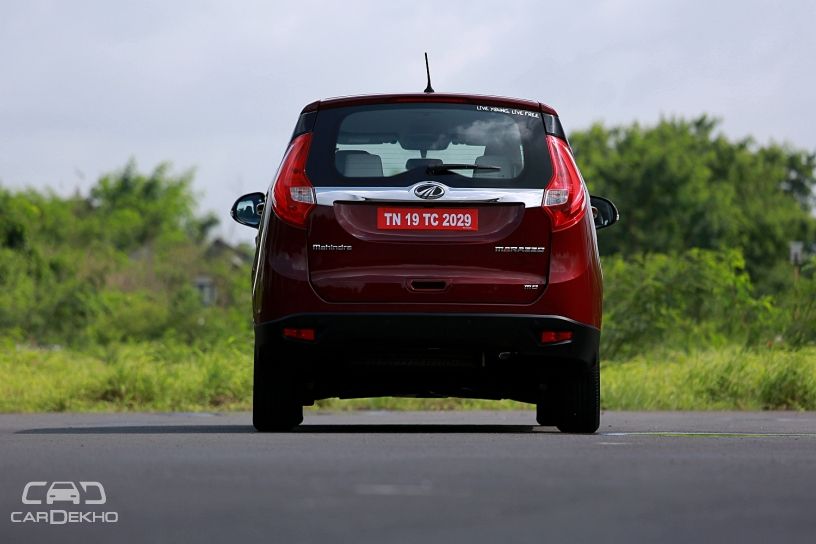 Like at the front, the Marazzo carries the family look at the back as well. It gets a chrome applique over the number plate housing like the XUV500. The rear bumper is also dual-tone and features two distinct sections like the front bumper. 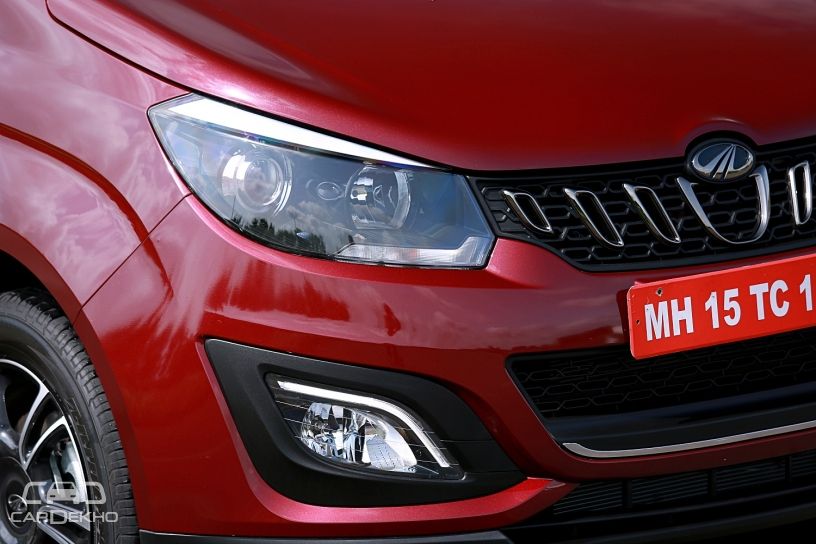 The halogen projector headlamp pictured here is available in the M6 and M8 variants only. Instead of these, you get regular multi-reflector units on the lower-spec M2 and M4 variants. 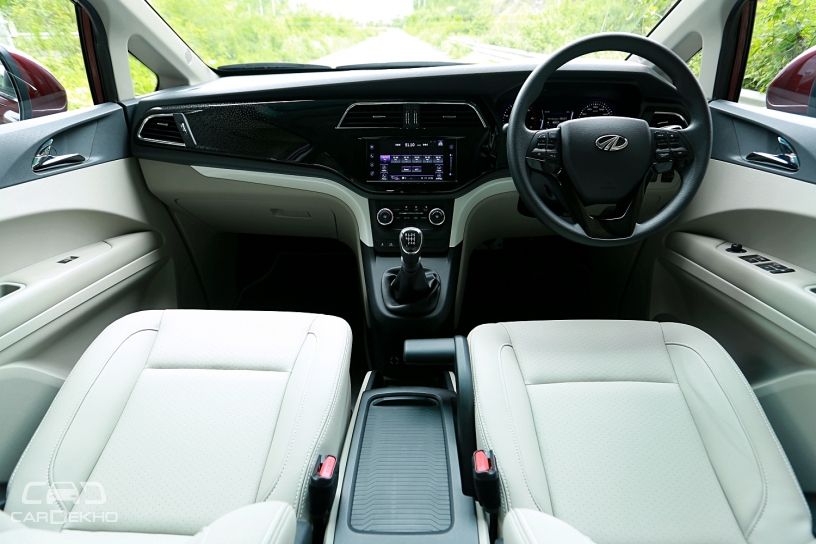 In terms of design, the white ceramic-finished insert on the dash looks chic. But we have our doubts on how this will age. The piano black finish back slab on the dashboard also looks good but it is also prone to scratches. 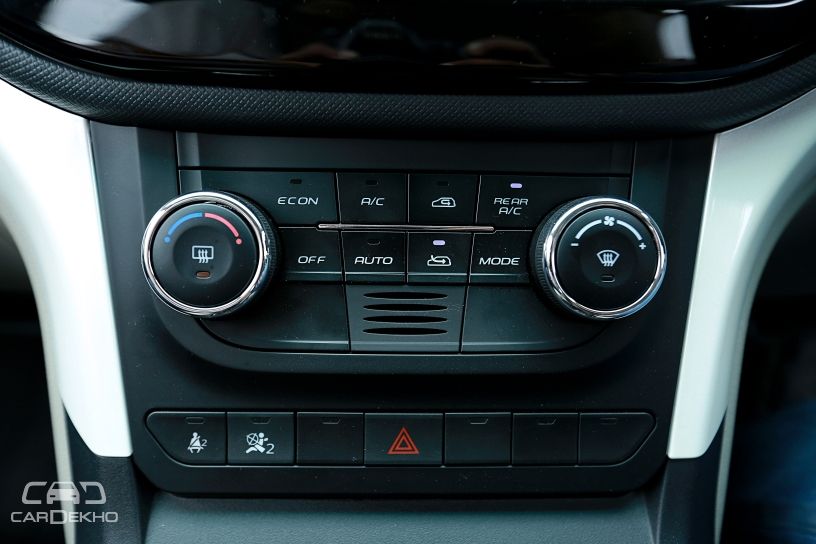 Auto climate control is limited to the M8 variant of the Mahindra Marazzo only which, frankly, is a disappointment considering the price of the MPV. 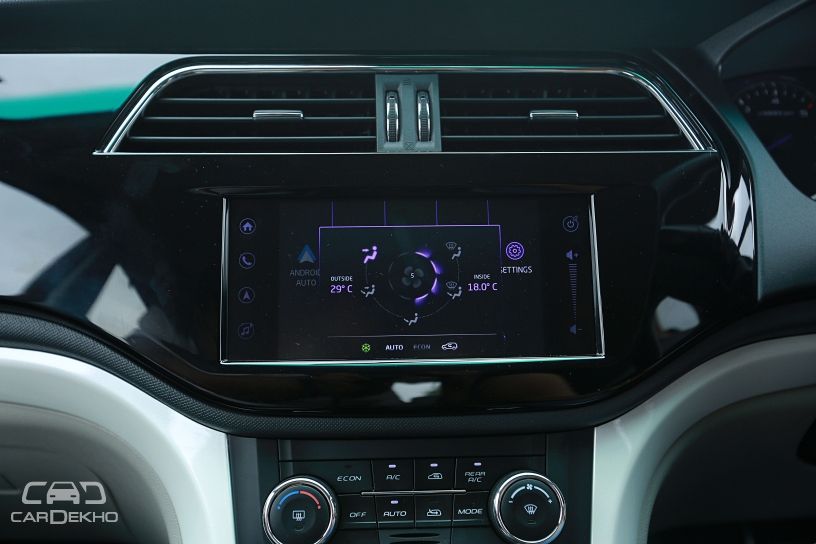 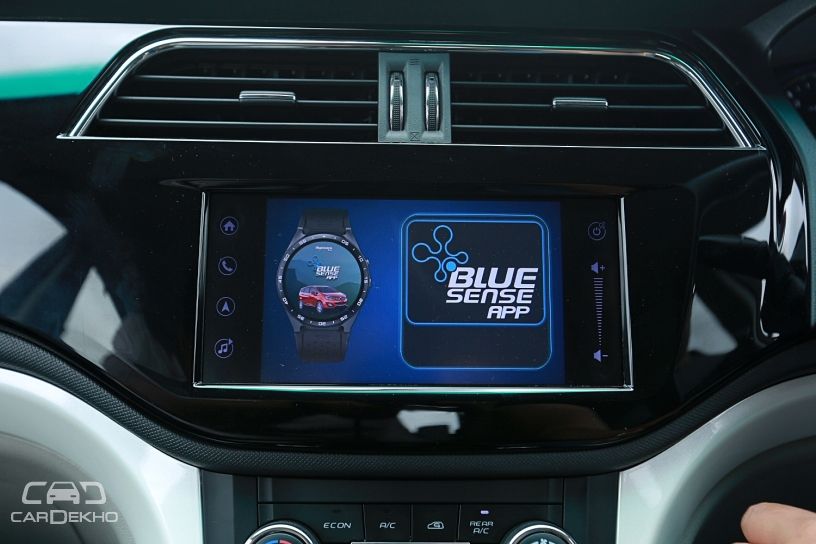 Like other Mahindra cars such as the Scorpio and the XUV500, the Marazzo is also equipped with Mahindra’s Blue Sense App which allows the user to control various functions like climate control and infotainment system and view vehicle stats like fuel range and mileage or tyre pressure on a smartphone or a smartwatch. 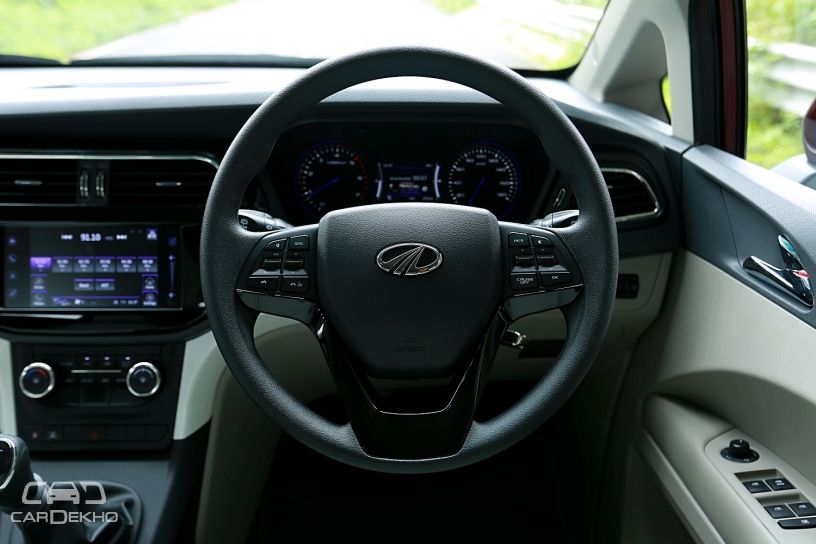 Cruise control is limited to the top-spec M8 variant only. 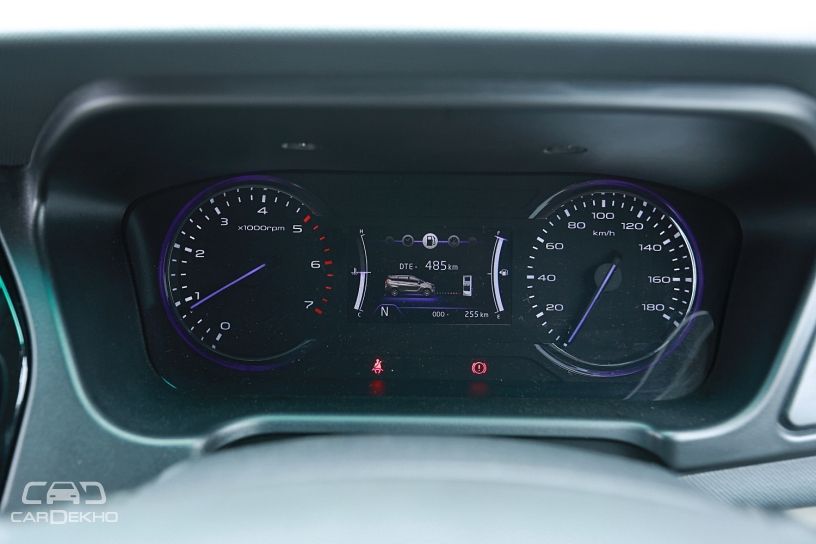 The Mahindra Marazzo gets a colour MID which displays directions for navigation along with other standard information. 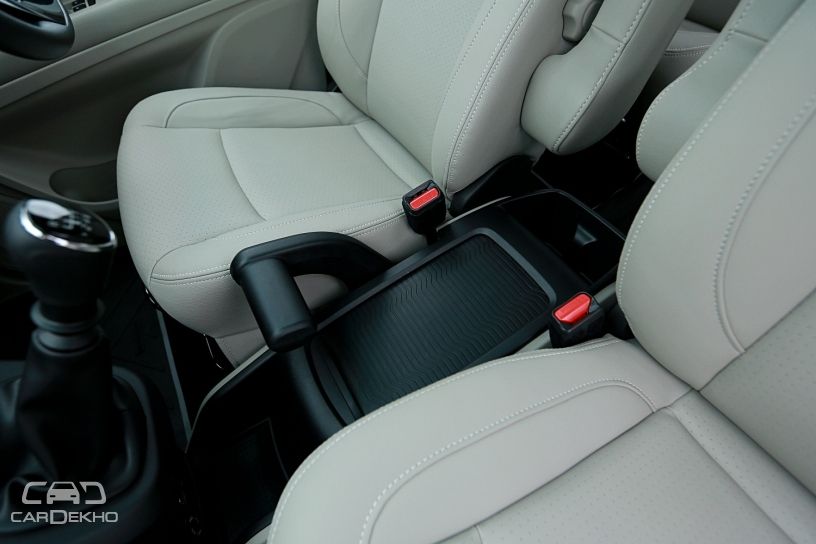 There are some unique elements inside the cabin in the form of an airplane-like handbrake lever and a tambour door centre console. However, there is one issue - the airplane inspired handbrake brushes against the driver’s seat every time you operate it. 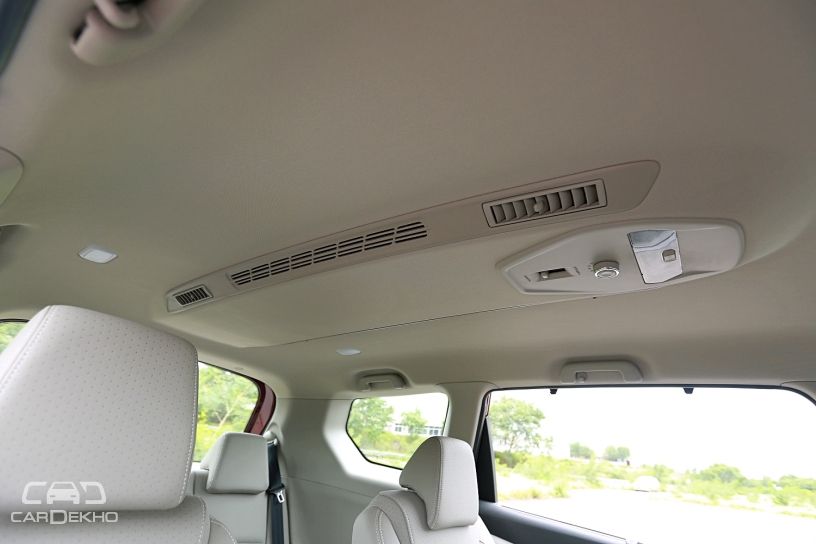 The Marazzo gets a first-in-class roof-mounted air conditioning system which can channel both diffused or direct currents of air to the rear passengers. It gets a separate evaporator coil for cooling as the unit isn’t a blower that sucks air from the front. 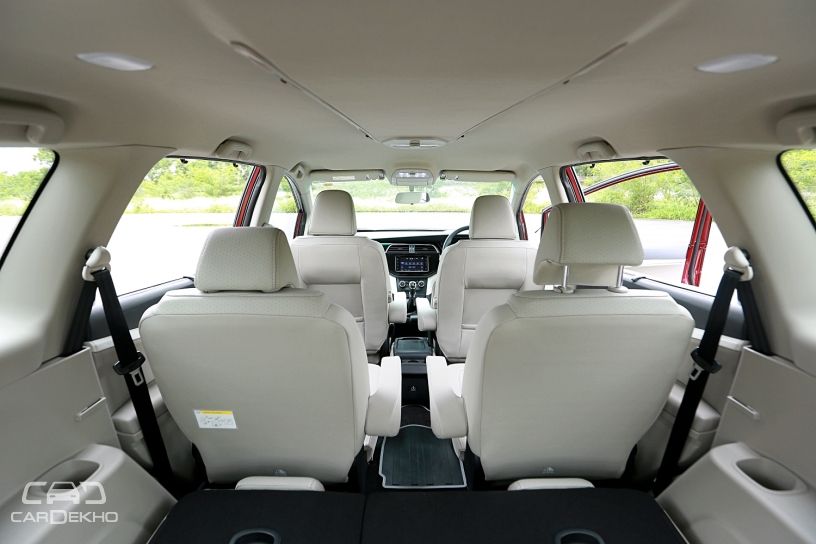 Underpinning the Marazzo is a ladder frame chassis, but since it is a front wheel drive vehicle, the floor is flat, resulting in more space for passengers in the second and third rows. 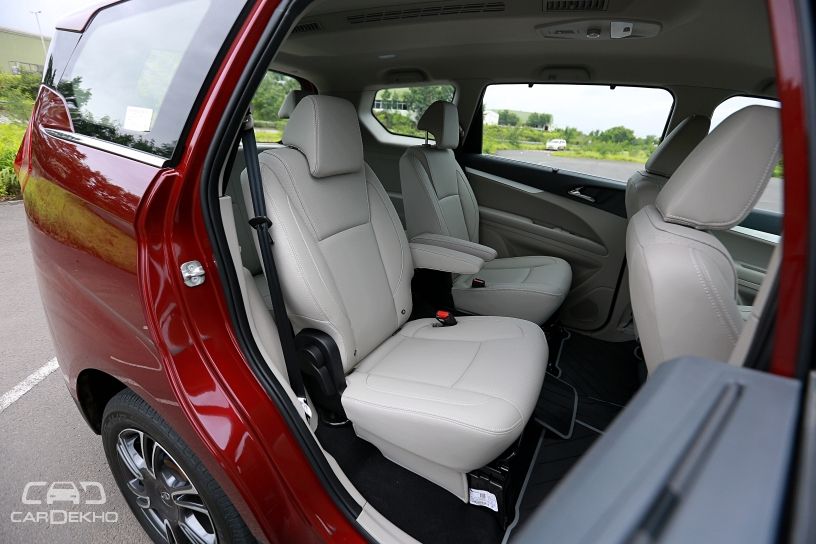 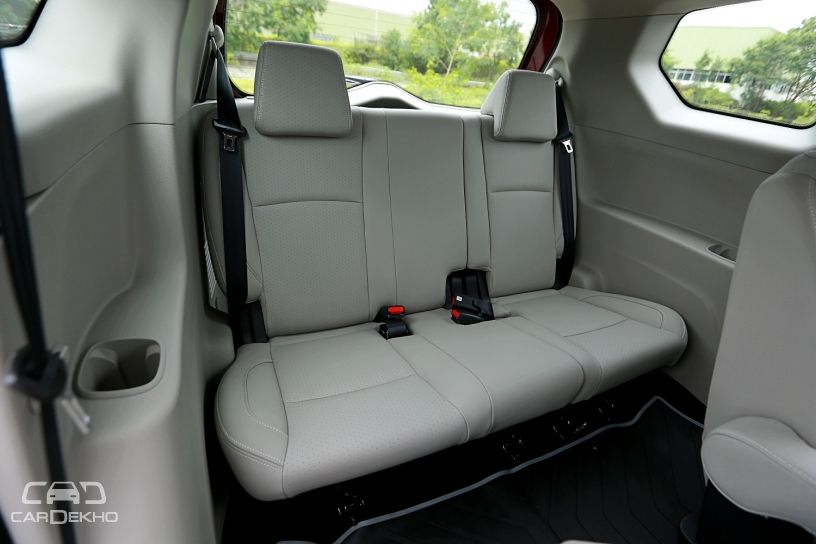 To make the Marazzo’s cabin feel premium, Mahindra has equipped the MPV with leatherette upholstery. However, like cruise control, it is also available only in the top-of-the-line M8 variant only. Lower variants, on the other hand, are offered with fabric upholstery only. 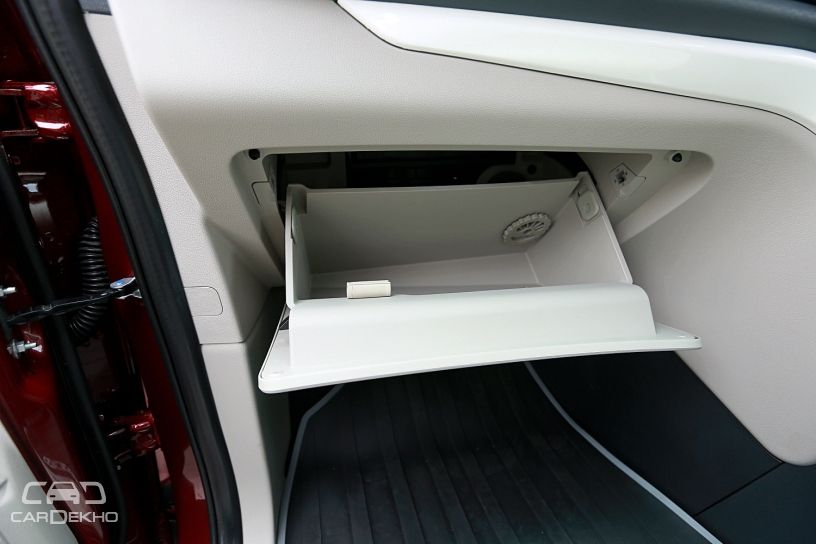 Among others, the Marazzo is also equipped with a cooled glovebox. It will save your drinks from the scorching summer heat. 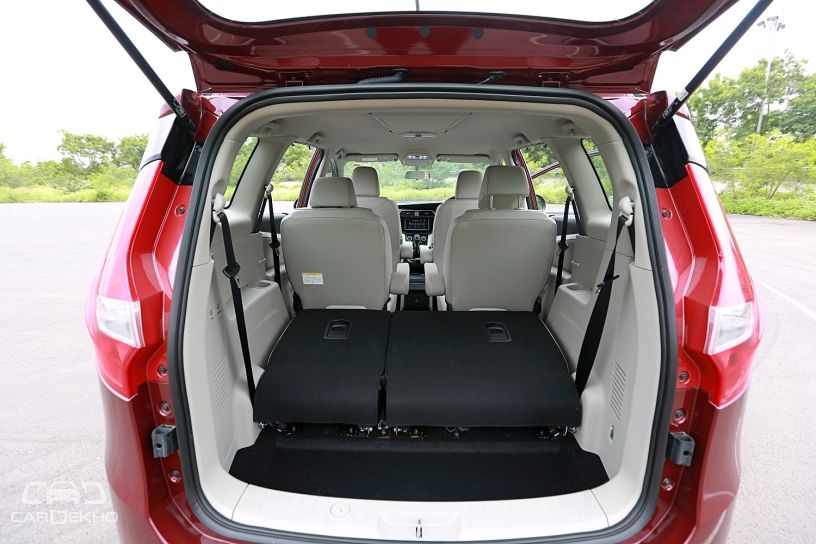 With all three rows up, the Marazzo has a boot space of 190 litres. However, it can go up to 1055 litres with the third row of seats folded down. 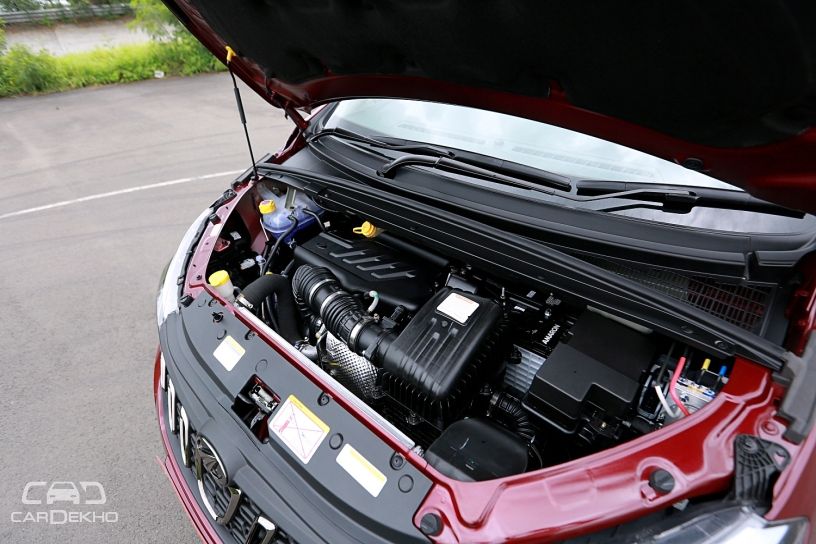 At launch, the Marazzo will be offered with a diesel engine only. It is an all-new 1.5-litre engine that generates 122.6PS and 300Nm, mated to a 6-speed manual transmission. Mahindra has said, however, that automatic transmission variants and a petrol engine will be added when the MPV is updated for the BSVI emission norms, which will be implemented in April 2020. 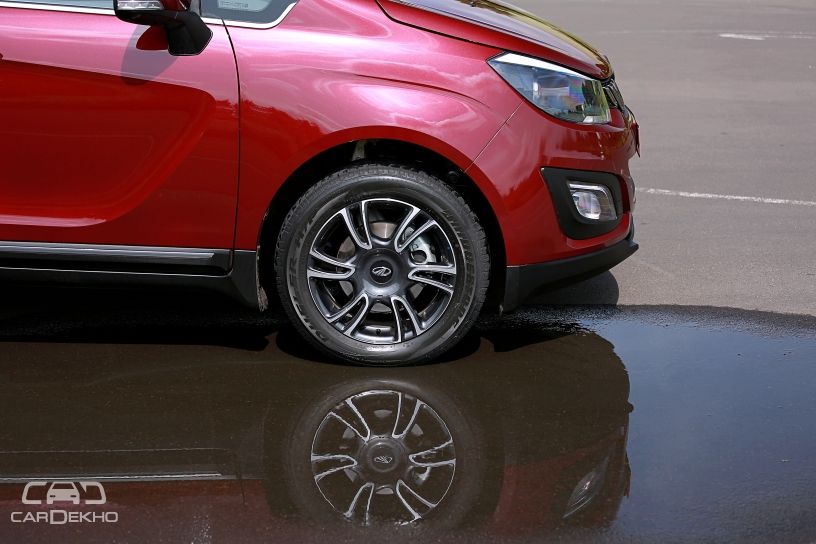 In the top-spec M8 variant, the Marazzo is equipped with dual-tone 17-inch alloys which are wrapped in 215/60 section tyres. The M6 variant gets 16-inch alloys while the M2 and M4 variants are available with 16-inch steel wheels only. 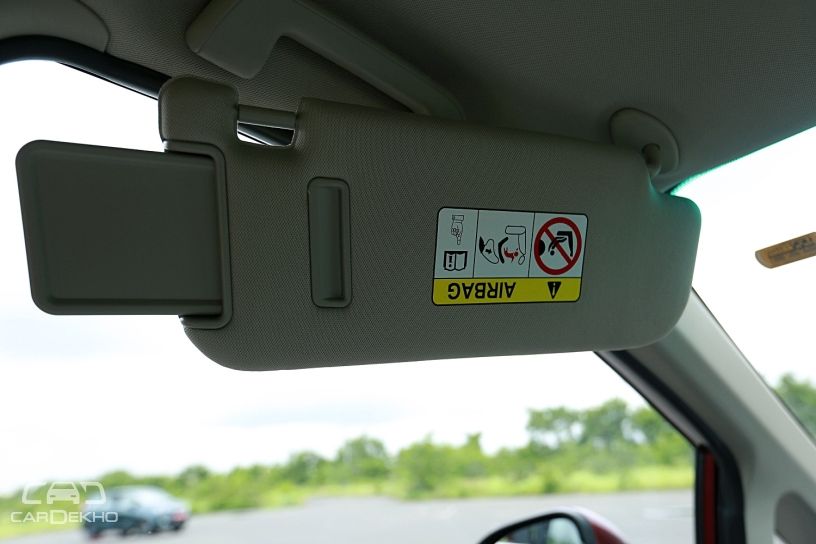 For safety, the Mahindra Marazzo gets dual front airbags, ABS with EBD and BA, ISOFIX child seat anchors and overspeed warning as standard. However, in the higher variants, it is also equipped with rear parking sensors, reverse camera, front and rear fog lamps and an emergency call feature. 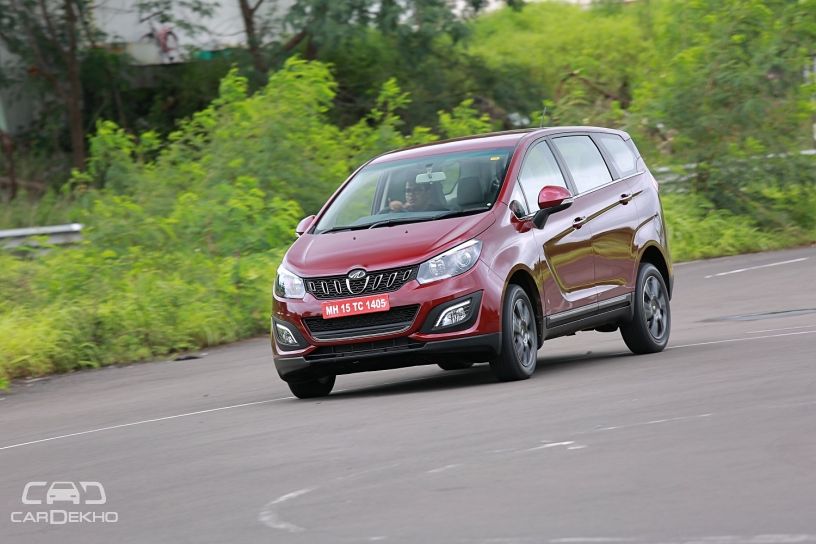 Thanks to the consistent flow of torque that it offers from 1750-2500 rpm, the Marazzo should be easy to drive in the city. You will never feel the lack of punch and won’t be left playing with the gear lever too often either. 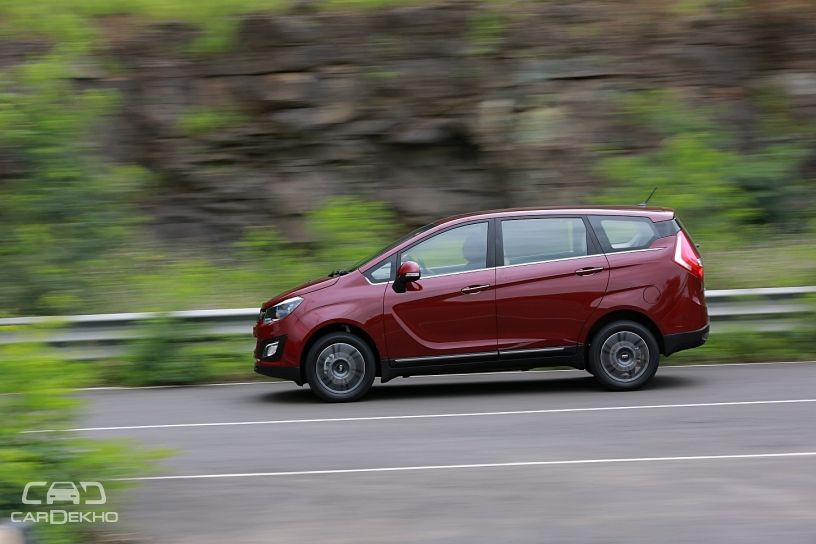 Out on the highway, though, the Marazzo might feel underpowered, especially with the entire family on board. It can cruise at triple-digit speeds without a fuss, but when you need to overtake a vehicle, you might need to downshift. Thankfully, the 6-speed gearbox is quite nice to use. 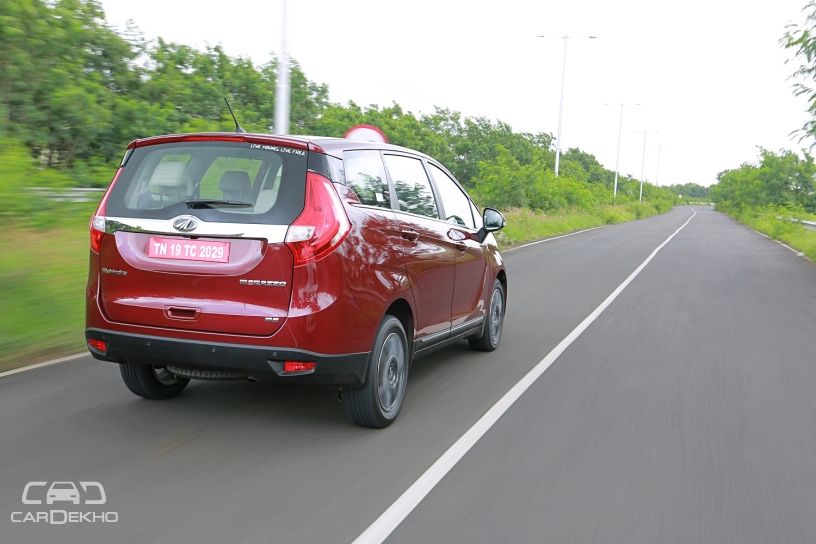 The Mahindra Marazzo gets four disc brakes as standard equipment, which is a nifty addition in our books. Under heavy braking, the MPV holds its line. Sure, there’s a bit of dive at the front end, but it didn’t make us feel nervous at any point. 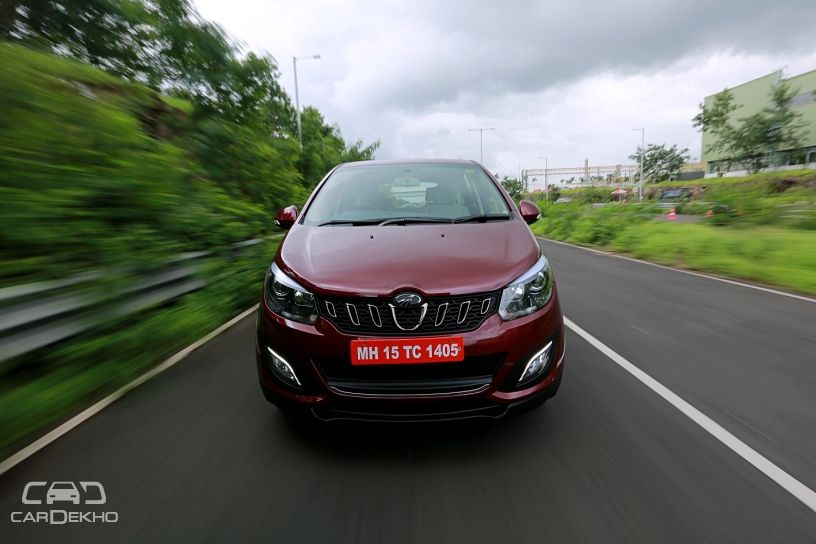 The suspension has been tuned to be on the softer side. So, once you hit a bump, you feel every bit of it and the car takes a second to regain composure. While occupants in the first and second row are unlikely to complain about anything, the ones in the third row might feel some extra lateral movement over nasty bumps. 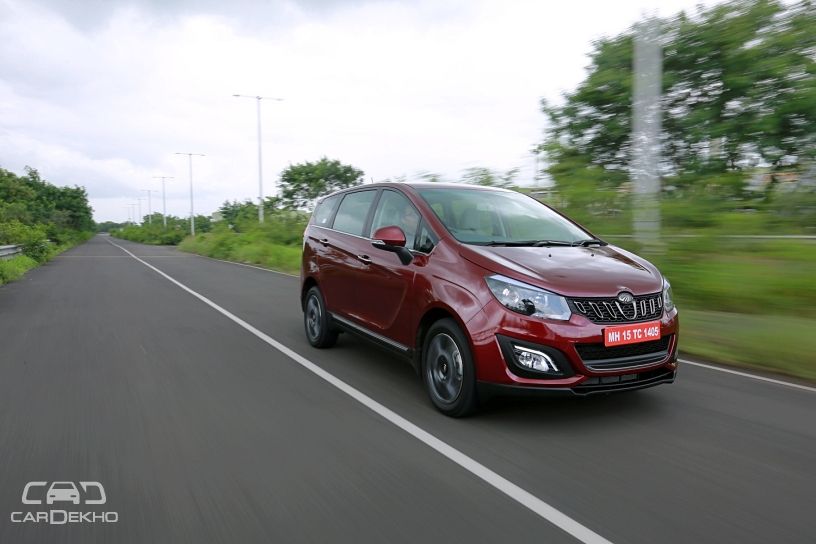 While the leaked pictures generated polarising opinions about the MPV's design, the Mahindra Marazzo looks much better in the flesh. It looks proportionate, with a good road presence and isn't quirky like its siblings, the KUV100 and the NuvoSport. As a product, the MPV feels mature and grown-up. We like the fact that the basics are done right. It’s spacious, comfortable and easy to drive on a daily basis. Sure, there are a few misses on the equipment front, but it isn’t exactly scant either.