Main Prosecutor In Mecca Masjid Case Was A Novice In Murder Trial, Linked To BJP: Report

A special anti-terror court on Monday acquitted Hindutva preacher Swami Aseemanand and four others in the Mecca Masjid blast case. 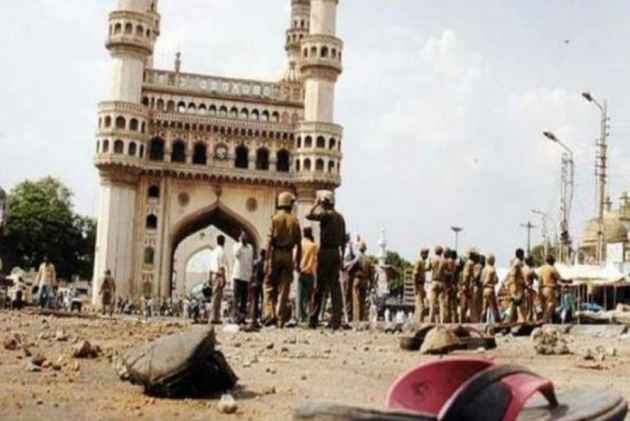 A special anti-terror court on Monday acquitted Hindutva preacher Swami Aseemanand and four others in the Mecca Masjid blast case, holding that the prosecution failed to prove "even a single allegation" against them.

N Harinath failed to prove the charges against the accused men or produce any solid evidence.

Harinath told NDTV he had been a lawyer for the economic offences wing of the Enforcement Directorate in the past and appeared for the CBI in bank fraud cases, attempt to murder and abetment to suicide cases.

However, other special prosecutors Ujjwal Nikam and Amrendra Sharan told the news channel that knowledge of a murder trial is a must, especially in a terror investigation like the Mecca Masjid attack.

"10 years' practice is necessary. And so is the experience of conducting a criminal trial," Nikam said, adding that it’s up to the NIA to explain why and how have they hired him.

Sharan said: "It is surprising that someone who doesn't have any experience in criminal trial is appointed Special Public Prosecutor."

NDTV also reported Harinath is associated with the BJP and was an active member of the Akhil Bhartiya Vidyarthi Parishad (ABVP).

A powerful blast, triggered by remote control, had ripped through the over four centuries-old mosque here during an assembly of devotees on May 18, 2007 when they had gathered for Friday prayers, killing nine people and wounding 58.

"Prosecution (NIA) could not prove even a single allegation against any of the accused and all of them stand acquitted," J P Sharma, the counsel for Assemanand, told reporters after the verdict was pronounced by special judge for NIA cases K Ravinder Reddy.

Reddy said his resignation had nothing to do with the judgment, according to a senior judicial officer.

AIMIM Chief and Hyderabad MP Asaduddin Owaisi tweeted "Judge who gave acquittal to all accused in Mecca Masjid Blast RESIGNS very intriguing and I am surprised with the Lordship decision".

The media was not allowed in the courtroom where the judgment was pronounced in the high-profile case, which was dubbed by the then UPA government as one of "Hindu terror", a term that riled saffron organisations, including the BJP, no end.

"He has sent the resignation letter to MSJ...He has cited personal grounds and it has nothing to do with today's verdict in the Mecca Masjid blast case," the senior judicial officer told PTI, speaking on condition of anonymity.

Reddy, had apparently taken the decision to resign sometimes back itself, the officer said.

Soon after the verdict, The NIA had come in for attack by oppostion parties, including the Congress and AIMIM.

Though there were 10 accused in the case, only these five were tried. Two other accused -- Sandeep V Dange and Ramchandra Kalsangra -- are absconding, while Sunil Joshi was murdered. Investigation is continuing against two others.

The bomb had exploded in an area of the mosque where devotees performed ablutions. Two more Improvised Explosive Devices (IEDs) were later found and defused by the police.

The incident had triggered violent protests and riots, prompting police action in which five more people were killed.

Buoyed by the verdict, the BJP claimed that it had "exposed" the Congress's "appeasement politics" while the latter raised questions about the functioning of the NIA.

BJP spokesperson Sambit Patra alleged in New Delhi that the Congress has long "defamed" Hindus for votes and demanded that party president Rahul Gandhi and his predecessor Sonia Gandhi apologise for using terms like "saffron terror" and "Hindu terror".

Patra said people will teach the Congress "a lesson" in the Karnataka Assembly polls as in the 2014 Lok Sabha elections when the party was reduced to 44 seats.

Senior Congress leader Ghulam Nabi Azad said, "It (acquittal) is happening in each case since the government was formed four years ago...People are losing faith in the agencies."

Owaisi, in an earlier tweet, claimed that the NIA did not properly pursue the case, leading to the acquittal of the accused.

According to Aseemanand's counsel Sharma, the court after examining documents and material placed on record found that the charges did not stick.

"This entire case was based on confessional statement of Swami Aseemanand. Right from beginning we had been placing before the court that this is not the statement of confession.

"The defence argued that the so-called confessional statement was forced from Swami Aseemanand in order to create a theory of 'Bhagwa Atankwad' (safron terror)," he said.

The court, Sharma said, held that the confessional statement of Aseemanand was not voluntary. "CBI had got the statement of Swami Aseemanand recorded in Delhi while he was in police custody during December 2010," he said.

Sharma claimed the investigating officer of the CBI had "intentionally" implicated the accused to sully the image of 'Sant Samaj' (the fraternity of seers) and the RSS, to which those acquitted belonged at some point of time.

He said nothing incriminating was recovered from any of the accused, and that there was no corroboration to the "confessional" statement of Aseemanand.