In rural and most inaccessible parts of Madhya Pradesh, not unlike other parts of the country, efficiently health care is hardly, if ever, accessible. 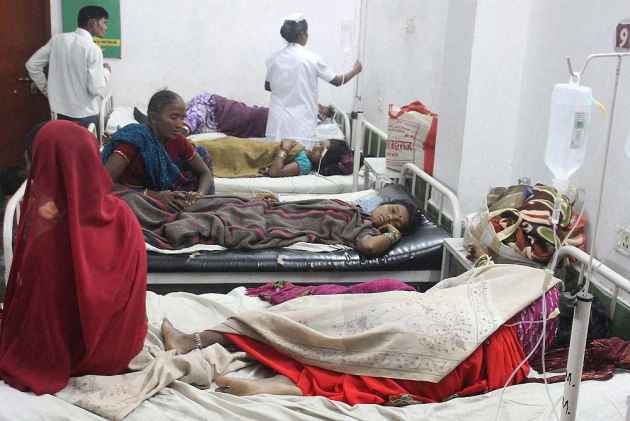 Aneema Begum, 61, had the last of her three children 38 years ago. The first two didn't survive more than a year, and it is after the birth of her last, and only surviving son, that Aneema was left with a prolapsed uterus — a condition wherein muscle weakness causes the uterus to sag or entirely come out of the body. In Roshanpura village of the Raisen district where she lives, there are few medical professionals who can diagnose the condition, let alone operate upon it. "For nearly 40 years it has protruding out of my body. I told my husband and son to take me to the doctor several times," says Aneema. "The one time they took me to Bhopal two years ago, the doctor wasn't available."

If it weren't for the ASHA worker, Khaleej Fathima, who brought her to the Community Health Centre in Sanchi, Aneema says she would have had to silently suffer all her life. She has now been referred for surgery to the district hospital by the gynecologist.

Aneema is only one of the many women brought by ASHA workers across the state for health check-ups organised by the state government, as part of the Mahila Swasthya Shivir (MSS).

In rural and most inaccessible parts of Madhya Pradesh, not unlike other parts of the country, efficiently health care is hardly, if ever, accessible. Several women admit to the camps enabling their first ever visit to a qualified doctor. Most women deliver without a single ante natal check-up and with the help of midwives, ASHAs and ANMs. They are the only visible extension of the government's health care services in these regions and it is impossible to deny their crucial role in making basic services available to all women at the village.

However, ASHAs are often not trained or equipped with the skills to identify complications and illnesses, which if recognised at their early stages could easily be treated. While both the infant and maternal mortality rates in Madhya Pradesh are higher than the national average, the MSS is an attempt to better the overall health indices by making best use of the available resources right down to the village level.

From August to September this year, over 23 lakh women and girl children from 55,000 villages were screened and examined by medical professionals in health camps conducted across the State. Of them, at least three lakh pregnant and non-pregnant women were referred and treated for a wide-range of complications from their village to the block and district level.

Pregnant women were provided Ante Natal Care to ensure increase in institutional deliveries and early detection of complications. Other women are screened and tested for a range of ailments including non-communicable disease such as hypertension, diabetes, infertility, cancer, urinary tract infection, ENT, orthopedic and ophthalmic problems, among others. "Maternal deaths are directly linked with early pregnancies, anemia, infections during pregnancy, delivery and postpartum hemorrhage.   Earlier the women are reached by the health functionaries through regular health checkups, earlier can we detect and correct causes and save more lives of mothers giving birth to healthier babies of normal weight," says Manish Mathur, Officer-In-Charge, UNICEF.

Designed in a novel manner, at all three administrative levels — village, block and district — the camps were set up on specific, pre-determined dates at each level. Manpower and resources right from the village level were mobilised in order to ensure that women from every household are examined by a lady MBBS/AYUSH doctor. Doctors examined the women screened by trained ASHA workers, who went from door-to-door keeping watch for a list of symptoms, given to them by the State government, among both pregnant and non-pregnant women.

Health care services are identified as the priority by most panchayats and majority of demand better, accessible infrastructure in their village plans. However, district and state officials argue that it is a near impossible task, given the extreme dearth of medical professionals, especially in the rural parts of the State.

Besides acting as a means to fill this vaccum, the health camps have also encouraged districts to better plan and utilise their resources in making these services available to every household. For instance, the results of the camp in identifying high risk cases of pregnancy and, thereby, reducing MMR significantly has led the Raisen district to adopt the pattern and conduct monthly Ante Natal Care camps in all its villages. District officials have given themselves a target of bringing down Raisen's MMR from 217 to 100 by way of these camps.

"We spent a lot of time getting to know women in every household in our village. They easily open up to us and so we know everything about their health, finances, family. This makes it easy for us to refer women with complications to the doctor," says an ASHA worker in the Gairathgunj camp. "While we understand when something is wrong, we can't diagnose the exact problem or provide medicines. These camps have ensured that so many women are examined and treated. If they didn't take place, women would either never to go to the doctor or wait till the situation is completely out of hand."

First examined by doctors who go to their village, women identified as requiring treatment not accessible at the village are referred to the Block level. While further tests are conducted and medicines are provided at the block, those in need of specialised care, treatment and resources such as for cancer, infertility and other surgeries, are referred to the district hospital.

Doctors at the camp say that, predominantly, over 70 per cent of the women in the rural MP have severe anemia. The camps therefore play a crucial role in providing medication, iron sucrose injections or blood transfusion, depending on the levels of hemoglobin.

Bhagawati Lodhi (24) from the Singhar village is referred to the community health centre in the block on being examined at her village. Minutes after she registers for check up at the CHC, on September 23, she is unconscious. Pregnant, and in her eight month, she is diagnosed as severely anemic with a hemoglobin count no more than 3.8gms. The normal count of pregnant women is 12 gms. She is immediately rushed to the district hospital where doctors promptly recommend and conduct blood transfusion.

"After this transfusion, her HB count should increase to at least 4.6gms. Her case is severe and she will need more than one transfusion," says the gynecologist at the District Hospital. "Her condition has worsened due to recurrent pregnancy. This is the third time she is pregnant in three years. Women lose a lot of blood during each pregnancy and have to space child birth."

However, shortage of human resources, in terms of absence of medical professionals, has led to a situation where a few specialists are forced to travel entire districts on the days of the camp. "While it is mandatory for specialists to be present at the block level on all days of the camp, we have very few specialists in government hospitals and most of them are in the district hospital," says Shikha, District Programme Officer, Raisen.  "It is also extremely hard to find private practitioners in these regions. We, therefore, have to manage with government doctors and often, aged doctors are seen traveling through the district to examine patients in their blocks." In Raisen, for instance, there is one orthopedician, two surgeons, two ENT specialists, three optholmologists and a few dentists who are responsible for 1540 villages in the district.

Conducted for the first time, over only a three-month span, questions have been raised about their sustainability and long-term impact. However, Deputy Director, Maternal Health, Dr. Archana Mishra says, "Far from being a one-time effort, these camps will be organised in a phased manner so that all women are regularly screen for illnesses and complications."

Planned to efficiently utilise resources at every level, the camps also enable creation of an area-wise profile of illnesses and health conditions that can be better address shortages in a planned manner, through targeted policy measures.

Part of the Government of India and UNDP Media Fellowship on Decentralized Planning, 2015