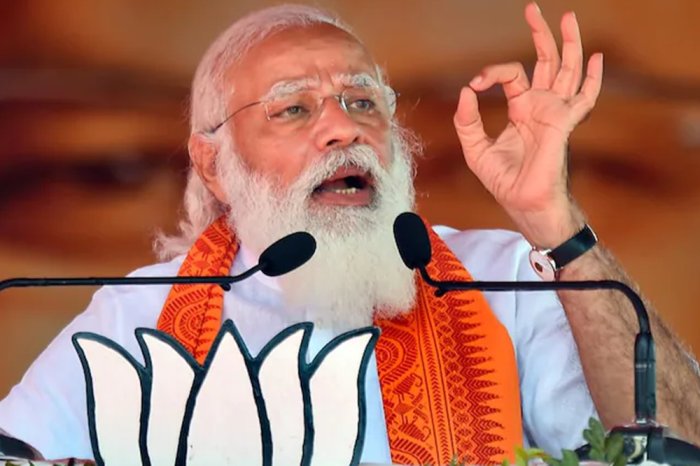 Prime Minister Narendra Modi said on Sunday said that Trinamool Congress supremo Mamata Banerjee has already started questioning the functioning of EVMs which has kept her in power for 10 years because she is anticipating defeat in the West Bengal assembly elections.

"Asol parivartan" (real change) is coming to Bengal for the development of the state, asserted the Prime Minister. Modi said "bhrastachar-er khela cholbe na" (game of corruption will not continue).

He claimed that wall posters put up by TMC displayed Banerjee kicking at his head.

"I saw Didi's men drawing pictures on walls where Didi is playing football with my head," he said, questioning why the TMC supremo was insulting the heritage and culture of Bengal.

The state has a long tradition of using wall etchings of cartoons and graffiti for political messaging. "I always bow my head in the service of 130 crore people of the country," he said, asserting, "Didi can put her leg on my head and kick it but I will not allow her to kick the dreams of Bengal's people," he said.

Modi claimed that since scams could not be done in Ayushman Bharat, PM-Kisan and direct benefit transfer schemes of the Centre, the TMC government here did not implement these
in West Bengal.

"BJP runs on schemes, the TMC runs on scams," he said. Modi said that Mamata Banerjee has played with the lives of Bengal's people for 10 years, but now her `khela' (game) will be over and `vikas' (development) will start.

Modi said that true change will be ushered in for the development of Bengal, and to enhance the glory of the state besides serving the poor.

"True change will be brought which will ensure that `tolabaj' (extortionists) and syndicates go to jail and strong action is taken against the corrupt," the prime minister said, asserting that "asol parivartan" will be brought in Bengal by the BJP.

With the slogan `Jai Sri Ram' becoming a prime issue in the eight-phase West Bengal assembly elections starting March 27, Modi said he would like to greet the people of 'Rampara' village in Bankura with "Ram Ram", maintaining that the hamlet is being discussed across the country.

Rampara is a village in Bankura where every male member is said to be named after Lord Ram.

"If you call the name Ram in Rampara, then Ram will come out of every house; this is not the story of this village alone but of the whole forest dweller and adivasi community" he said.

Modi said that the bond of the forest dwellers and adivasi community is so strong with Lord Ram that this kinship cannot be destroyed by anyone.

Wooing the sizeable adivasi community in Bankura district, Modi said that the forest dwellers had been Lord Ram's compatriots during his long years of exile in forests.

"But think how Didi behaves with these people, is it to please somebody else?" he asked, accusing the chief minister of doing vote bank politics.

He claimed that had Banerjee shown her real face 10 years ago, the people of Bengal would never have elected her. Modi said that with the people of Bengal have decided to go for a change in the coming assembly elections, the TMC supremo has become angry and is taking out her anger on him.

He said that the central government has given hundreds of crores of Rupees to the Bengal government for a piped water project, but people in the state had not benefited from it.

Questioning the lack of investments and jobs for youth and irrigation facilities for farmers in the state, Modi said that Banerjee has made only hollow announcements and that there were no signs of their fulfilment on the ground.

"You are saying 'khela hobe' (game will be played). Are you not satisfied with playing with the future of the people of Bengal for 10 years," Modi rhetorically asked, adding "Bengal has decided that 'khela shesh hobe' (game will end), the development will begin."

Holding that TMC leaders have become rich, buying expensive cars and large houses while the general public lives in distress, Modi said that these were bought with money meant for people's welfare.

Modi said the TMC chief's anger has been rising since she is being asked uncomfortable questions.

" In a democracy, work done for the people is seen and not one's face," he said, claiming that she will now have to see the faces of BJP legislators for a long time as they are the representatives of the deprived people of the state who have suffered at the hands of extortionists.

The prime minister called for forming a "double engine government" with the BJP at both the Centre and the state. He said that precious time for the development of the state has been lost owing to "misrule" by Congress, the Left and the TMC governments.

"It is because of the rule of these three for decades that Bengal saw the flight of lakhs of talented young people from the state," he said.

National Education Policy will be implemented in the state as soon as a BJP government is elected so that higher studies can be pursued in the local language, the prime minister promised.

"Ayushman Bharat will be implemented in Bengal immediately after a BJP government is formed in the state," he said. The PM said that tourism will get a boost in Bishnupur which is famous for terracotta temples.

He also promised the promotion of terracotta toys from the area across the country.

Maintaining that he was overwhelmed at the huge turnout at the rally, he said "I had to do a roadshow after alighting from the helicopter" since there were as many people there as at the rally.

He was seen waving at the crowd standing on the footboard of his vehicle on the way to the meeting ground nearby, after alighting from the helicopter.

"The crowd here proves that people of Bengal have decided that Didi (Mamata Banerjee) is going on May 2 and 'asol parivartan' is coming," he said.