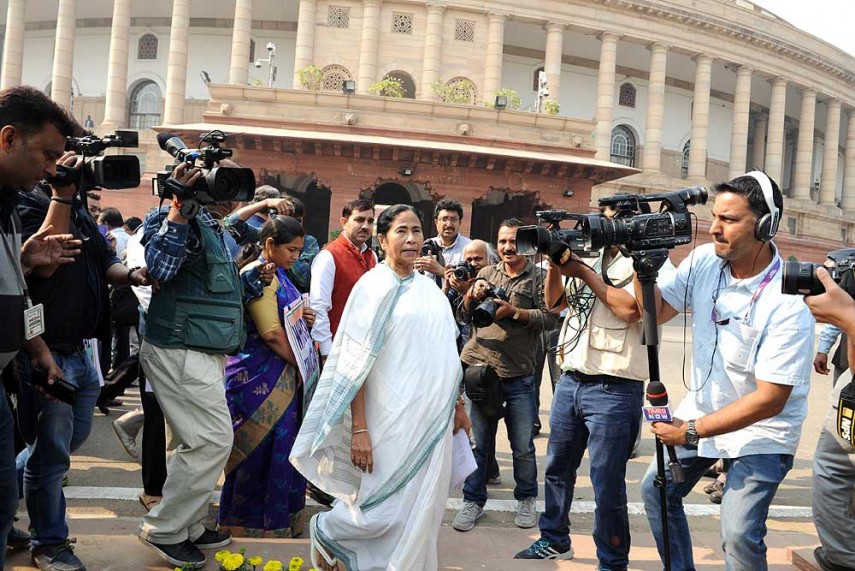 West Bengal chief minister Mamata Banerjee and Indian President Pranab Mukherjee are both Bengalis. So when Banerjee flew down to New Delhi on Tuesday to meet Mukherjee in the hope that she could convince him to urge the Central government about a rethink on the black money drive, a political observer quipped, "Dekhi dui Bangali miley ekta shomadhan bar korbey parey ki na." (Let's see if the two Bengalis can come up with a solution).

The 'solution' of course refers to the chaotic monetary situation currently prevailing in the country since the announcement by the Central government that it was banning the Rs 500 and Rs 1000 Indian currency notes. As in other parts of the country, Calcutta sees hundreds of people every day queuing up for hours in front of banks and ATMs desperate for cash. Often customers are turned away because cash has run out. Those who want to deposit the old currencies or exchange them for new notes often find that their work cannot get done because their bank accounts are not updated with the latest IDs and documents.

The use of plastic money, debit and credit cards have shot up by 75 percent. And the use of cash has crashed by 30 percent. People don’t want to spend 'raw money' anymore, a taxi driver cribbed, complaining about the lack of passengers and therefore business.  Not that the cashless method is entirely trouble free either. The overloaded networks are often failing and consumers are complaining that their accounts are getting debited but they are not getting receipts.

If last week Mamata Banerjee criticized the sudden decision and appealed to the Modi government to withdraw the diktat, this week she took matters into her own hands. She called up the leaders of almost every Opposition party and suggested that they take out a united protest march to the President’s house and hand over a list of demands including cancellation of the Central government order.

However, only three Opposition parties responded to the call and they are the National Conference, Aam Aadmi Party and – surprisingly enough – the Shiv Sena, a traditional BJP ally.  Also, other than NC’s Omar Abdulla, the other two parties were not represented by its top leadership. Delhi chief minister Arvind Kejriwal, who has often stood in solidarity on many issues with Mamata, stayed away but sent a colleague.  Shiv Sena clarified that they were not against the anti-black money drive but wanted a more pragmatic and orderly execution of the plan.

Mamata had also called up Sitaram Yechury, general secretary of the Communist Party of India, her traditional arch rivals in West Bengal, to invite him to join the protest march. But, not surprisingly, he declined. While the Left is criticizing the Modi government for what has been called the 'arbitrary manner' in which the anti-black money crusade was 'imposed' on the country,  the Comrades are totally unwilling to be sharing common political ground with the Trinamool Congress.  Moreover they don’t want to come across as not supporting an anti-black money drive. CPIM MP Mohammad Selim in fact dismissed Mamata’s call for unification  as utterly implausible.

Same with Congress. Last week, Rahul Gandhi appeared to speak in the same voice as Mamata against the Modi government's decision.  However, he was not seen marching alongside her to the President's house. Congress' Bengal unit clarified that Congress too is not against the anti-black money drive. "The hasty and arbitrary manner is what we are against," said Congress leader Adhir Ranjan Chowdhury.

Another regional party which did not attend the protest march in spite of being reportedly invited is the JDU. Nitish Kumar subsequently issued a public statement in praise of Modi's decision to ban the currencies.

Political commentators observe something deeper in Mamata Banerjee's attempt to try and unite the anti-BJP parties. Though ostensibly it is to stand up against what she calls the "harassment of the common people caused by the sudden decision to withdraw the currencies from the market", she is perhaps really trying to size up the political dynamics. To be sure she will do all that she can to try and form the "Third Federal Front" she has long been speaking of. The next general elections are going to be held in the not so distant future.