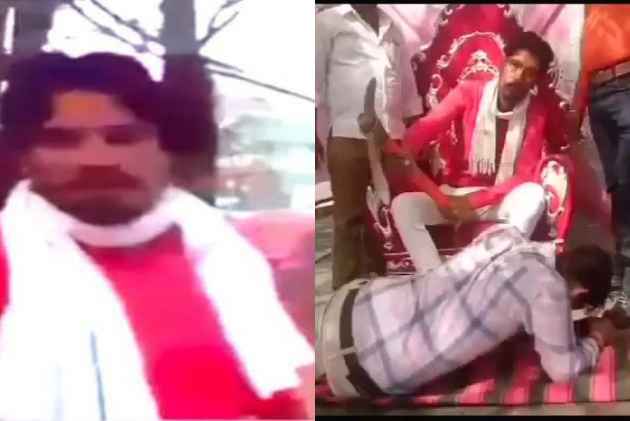 Shambhulal Regar, accused of hacking and burning alive a Muslim labourer and ranting about 'love jihad' in a video he made, was honoured in a tableau taken out in Jodhpur on Ram Navami.

A man dressed as Regar could be seen sitting regally on a decorated chair to honour Regar.  A picture shows a man bowing down to his lookalike, another has a poster with his picture that reads, 'Love Jihad se desh ko azad karana chahiye' (The country should be rid of 'Love Jihad'). Hindutva groups describe love jihad as form of religious warfare in which Muslim men lure Hindu women away from faith through marriage.

Rajasthan: Tableau taken out in Jodhpur on #RamNavami to honour murderer, who hacked a man to death & set the body on fire in Rajsamand last year. The killer, Shambhu Lal, had also recorded the act on video & uploaded it on social media, in December. pic.twitter.com/ApbH7SsCkJ

In December last year, a video surfaced showing Regar ranting about 'love jihad', hacking West Bengal labourer Mohammed Afrazul and then burning him alive in Rajasthan's Udaipur.  Following outrage, Regar was sentenced to jail, from which, he recorded more videos of himself justifying the act, saying he did it to protect 'Hindu women' from Love Jihad.  Regar was booked for murder, outraging religious feelings, and criminal conspiracy, among other charges.

This is, however, not the first time Regar has received right-wing support for burning a man alive.

A week after he was convicted, hundreds of activists of right-wing groups protested in support of him in Udaipur.  The clash between protesters and the police took place near Court Circle in Udaipur. According to Dainik Bhaskar, the protesters also unfurled a saffron flag at the entrance of the District and Sessions court. More than 20 protesters were detained.