An injury-time header from Kjaer secured a draw for Milan at Manchester United in the first leg of their Europa League last-16 tie. 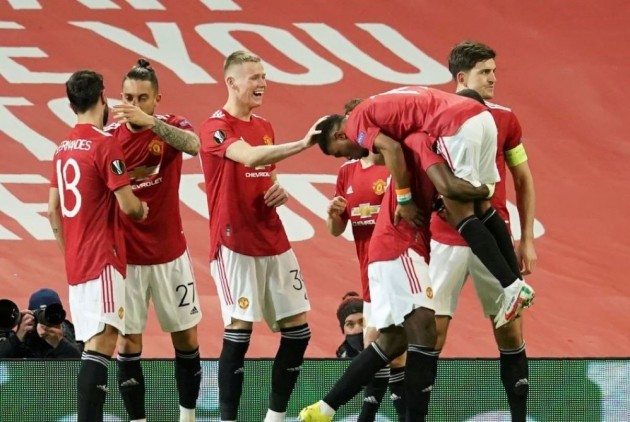 An injury-time header from Simon Kjaer secured a 1-1 draw for Milan at Manchester United in the first leg of their Europa League last-16 tie. (More Football News)

Teenager Amad Diallo's expert header from a Bruno Fernandes pass had put an out-of-sorts Red Devils ahead in the 11th meeting between these clubs but the first outside of Europe's elite club competition.

Each side was missing key players but it was Milan who coped the better and had two goals disallowed, although Harry Maguire produced arguably the miss of the season with the scores at 0-0.

Diallo's impact came in the 50th minute but, with barely 90 seconds to play, Kjaer headed a corner past Dean Henderson to snatch a potentially crucial away goal.

1 - Amad Diallo's first goal for Manchester United came with his first ever shot for the club, and in just his third appearance (all as a substitute). Lift-off. pic.twitter.com/3GdcMcjVDN

Rafael Leao blasted beneath Henderson five minutes in but the forward had strayed well offside before Kjaer's long ball.

Milan had been the better side before Maguire somehow failed to put United ahead from a Telles corner, the captain sending the ball spinning away off the post when standing almost on the goal line.

Anthony Martial was limping at the end of the half and was replaced at the break by Diallo, leaving Ole Gunnar Solskjaer with a further problem in attack as Edinson Cavani and Marcus Rashford were already sidelined.

Milan responded well to the setback and should have levelled through Rade Krunic, who headed over the crossbar after being picked out by Davide Calabria.

Daniel James spurned a great chance to make it 2-0, putting the ball wide from Mason Greenwood's cross with the goal gaping, and they were punished when Kjaer got free in the box and Henderson could only parry his header into the roof of the net.

What does it mean? Milan seize advantage ahead of San Siro return

Milan had looked the better side for much of the contest even though United had defended well to limit their opportunities.

Still, Stefano Pioli's side refused to give in and got their reward through Kjaer's header, giving them the slight advantage of a first-leg away goal.

It was the first goal United had conceded in 503 minutes in all competitions, and it could prove costly: in the past eight European ties when failing to win the first leg at home, the Red Devils have been eliminated.

Starting in place of Victor Lindelof, Eric Bailly coped very well with the pace of Leao with a composed performance alongside Maguire.

He made a team-high four clearances and regained possession six times, his performance deserving better than another late equaliser from a set-piece.

Rossoneri refuse to give in

Despite missing a host of first-team players, including former United striker Zlatan Ibrahimovic and playmaker Hakan Calhanoglu, Milan were the more accomplished side for much of the contest.

Luck was against them when Kessie's wonderful goal was disallowed, and Kjaer's late header will give them plenty of belief they can complete the job next week.

- Milan are winless in their last eight away games against English sides in all European competition (D4 L4) since a 1-0 victory over United in February 2005.
- Milan’s equaliser was the first Europa League goal Manchester United have ever conceded in the 90th minute or later.
- Amad Diallo became the youngest non-British player to score for United in major European competition (18y 243d), netting with his first ever shot for the Red Devils.
- Fernandes has been involved in more goals in all competitions than any other Premier League player since his United debut (56), with the Portuguese scoring 35 and assisting 21.
- Kjaer’s late leveller for Milan was his first goal in 18 games in major European competition, since netting for Sevilla against Spartak Moscow in October 2017.

Former United manager David Moyes takes his West Ham side to Old Trafford in the Premier League on Sunday. Milan are at home to Napoli on the same day in Serie A.