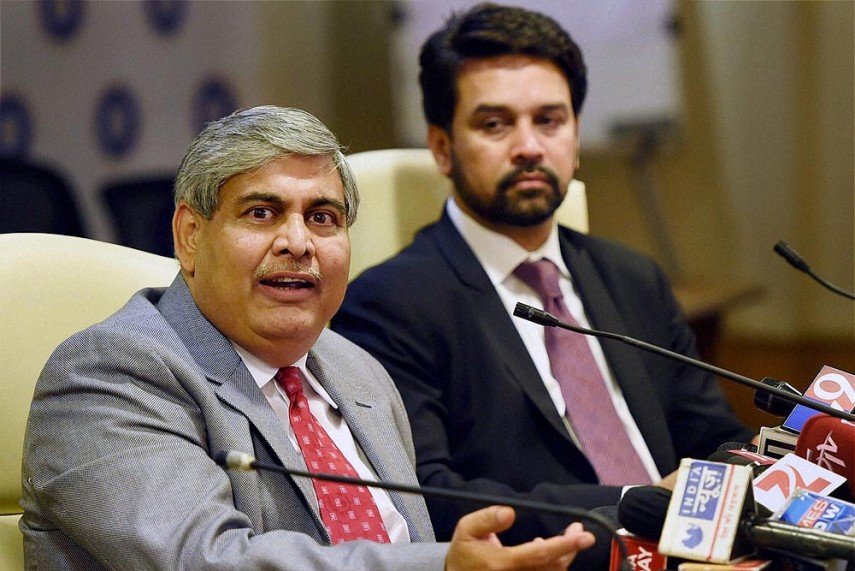 The names of IPL governing council chairman Rajeev Shukla and BCCI secretary Anurag Thakur were being talked about for the BCCI president's post on Tuesday, soon after incumbent Shashank Manohar resigned, apparently to contest for the post of the ICC chairman.

This was Manohar's second term, which was of two years, and which was to end in September next year. He had taken over the reins after Jagmohan Dalmiya's death last year.

If Manohar actually contests for the ICC chairman's post – and there is a huge speculation about that happening — he would not have been allowed to hold any position in any national cricket board, after the recent change of rules that he himself had initiated at the ICC.

And if Thakur, a sitting BJP member of Parliament and widely considered close to union finance minister Arun Jaitley, does throw his hat in the ring for the top post, then the secretary's post would become vacant.

But that remains to be seen. Some people contend that Thakur was unlikely to leave the powerful post, which he is said to have won by a solitary vote in March last year, and risk contesting all over again. "Why would he contest again? After all, in the BCCI set-up it is the secretary who calls the shots. He and his group can install a president who would listen to them and can be controlled," said a BCCI official.

This would be the second election for the BCCI president's post in seven months. On October 4, Manohar was elected unopposed for a second term of two years, after the election was necessitated by Dalmiya's demise on September 20 last year. Manohar's present term was to expire in September 2017.

Manohar's resignation was almost imminent, especially as the never denied reports that suggested he was more interested in the ICC chairman's post than his present responsibility in the BCCI.

If Manohar contests and gets elected as ICC chairman, he will have a five-year term.

Now, BCCI secretary will have to convene a special general body meeting within two weeks to elect a new president.

As per Rule 15 of the BCCI's constitution, the election should be held within 15 days from the date of resignation of the president. Clause (v) of Rule 15 of the constitution reads: "In case of vacancy occurring in the office of president by reason of death or by him being adjudged insolvent or by him being convicted in a criminal case by a competent court or by resignation or otherwise, the Hon. Secretary shall within 15 days convene a special general body meeting to elect the president who shall be nominated by at least one full member from the zone which proposed the name of the president whose term was cut short prematurely. Such person who is so elected shall hold office till the next elections."

Since Dalmiya was from the east zone, Manohar was also be considered to be a representative of the same zone. Hence, the interim president, till the time the special general body meeting is held, will be from the east zone. At present, Gautam Roy, president of the Assam Cricket Association, is vice-president from that zone. He is also the senior most vice-president of the five.

As per Rule 15, Thakur would have to circulate the notice for a special general body meeting soon.

Minutes after the BCCI announced, through a press release, Manohar's resignation, meetings started at various places in New Delhi.

Three office-bearers of the executive committee of a south zone association of the BCCI were seen getting into a huddle with Thakur at his BCCI office in New Delhi.

Later in the evening, a source said, an important meeting was held a union minister's residence where some of the key BCCI officials were present. More meetings are in store in days to come, said the source.

These are testing times for the BCCI, as a crucial case, related to the 2013 IPL betting-fixing scandal, is being heard in the Supreme Court. Even on Tuesday, there was a hearing into the Lodha Committee report and soon after the hearing ended the BCCI issued the media release announcing Manohar's resignation.

Manohar carries a squeaky clean image. Sources say he doesn't accept the BCCI's TA/DA etc. for attending meetings, despite being entitled for it.