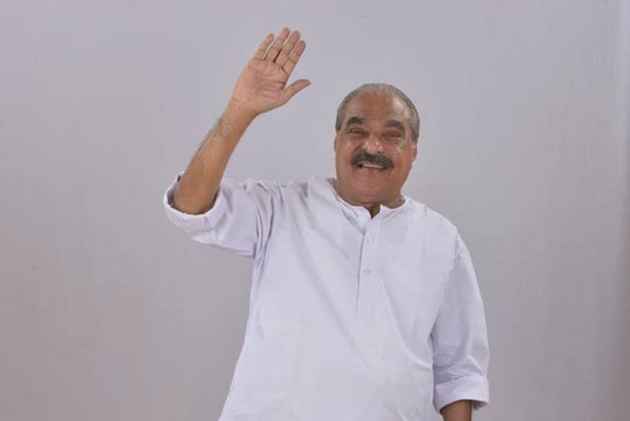 "De Vannu Mani, Da Poyi Mani..." (Here Comes Mani, There Goes Mani). These are not the signature lines of the popular Suresh Gopi show or the lyrics of some hit Malayalam song, but serious speculations about the political perambulations of 85-year-old K.M. Mani, chief of the Kerala Congress (M) and the third pole of Kerala politics.
It's a greasy, mobile pole. Arch exponent of a politics embedded in Kerala's Syrian Christian community, he fits perfectly the North's proverbial aaya ram, gaya ram. In the last couple of years, his rapid shifts from one major political coalition to the next have left Keralites a little dizzy if not bemused.
In the latest development, Mani and his son Jose K. Mani (MP) have, in a carefully calibrated move, promised support to the UDF only for the Chengannur byelections slated for May 28 -- with emphasis on “only.

What he or his party would do after that is anyones guess. At the moment, its hard to tell if Mani himself knows where he is going next.
K.M. Mani had parted ways with the Congress-led United Democratic Front soon after the assembly elections in 2016 and attempted to endear himself to the Left Democratic Front led by the Communists, hoping to gain entry.
But he found himself on a sticky wicket when one of the oldest constituents of the LDF, the CPI, was adamant that he be not allowed into the Left bloc, citing corruption as an issue.
Mani, who was the finance minister in the previous UDF government (2011-2016), had to resign as finance minister in 2015 for allegedly being involved in the bar bribery scam. But sources say the CPI's objection to Mani's entry was not because of alleged corruption but stems from its  own insecurities -- that its bargaining power would be considerably eroded if a party with six MLAs were to be accommodated.
Interestingly, the church-backed Kerala Congress and the Communists have been among Kerala's oldest ideological foes. The first was formed in 1964, exactly the same year as the latter split. Mani's group has been one of Kerala Congress's most prominent factions.
P.C. George, independent MLA, formerly with the KC(M), says he's not seen a dirtier politician than Mani. Mani had left the UDF proclaiming he would never go back to the UDF again but has joined them in just over a year for his own survival. KC(M) has hardly 500 votes in Chengannur, of which half is held by the P.J. Joseph faction. If there was any chance for UDF to win Chengannur, it is now lost.
The LDF shrugs off Mani switching sides. Says MP M.B. Rajesh, Its for Mani to explain why he is supporting the UDF in Chengannur. We won in 2016 even without Mani so this is not going to affect our prospects one bit.