Martyr's Infant Child Sits On His Coffin, Making Everyone Emotional

For the sake of rituals, little Aaru held the burning stick along with her grandfather Jagannath before the latter completed the formalities of lighting the funeral pyre on Saturday. 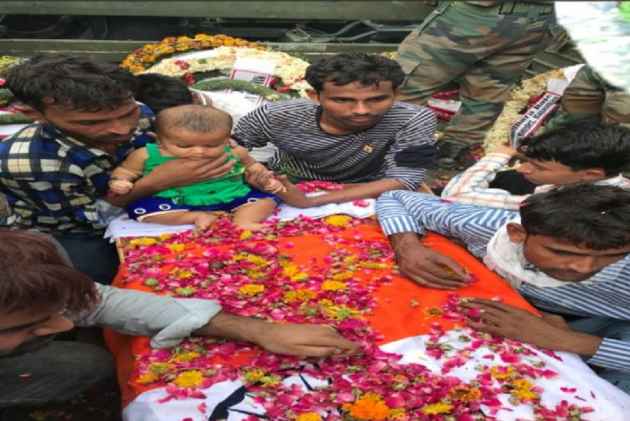 It was a poignant scene at the village of Army paratrooper Mukut Bihari Meena who died fighting the militants in Kashmir when his five month old daughter sat on his coffin and lay on it when his body arrived.

For the sake of rituals, little Aaru held the burning stick along with her grandfather Jagannath before the latter completed the formalities of lighting the funeral pyre on Saturday.

Witnessing this emotional moment was also Jhalwar collector, Jitendra Soni, who was moved after seeing the infant on her martyred father's coffin. He later penned a letter addressed to little Aaru  describing what he and peole around him saw and how they felt, at the ceremony.

"You sat on the coffin and lied on that without crying. Moments before, you had seen the face of your father. It was very emotional." Soni wrote in the letter.
"Me and all the Army officers were watching you doing this and I know everyone of us were thinking in our own respective ways but your innocence and your father were at the centre of our thoughts" Soni wrote in the letter.
The letter was shared widely on social media.

"Not only this area, but the blessings of every responsible and sensible citizen of the entire country are with you. Grow well and make your father's glorious martyrdom your pride," the letter read.

Before the funeral ceremony, when the body in coffin wrapped in the tricolour arrived at his village, the girl sat on the coffin and lay on it.

The collector also mentioned how the innocent gesture of Aaru caught attention of people and made them emotional.

Belonging to a non-descriptive village 'Ladania' with around 100 houses, 25-year old Meena laid down his life in Kupwara on July 11 and his cremation was performed with full military honours.

Public representatives, officials from the Army, district administration, police and thousands of people from different parts of the district paid homage to Meena.