Delhi as an Endless City. Endless in space and time. As long as there is an India—or parts thereof—there will have to be a Delhi, a necessary evil. 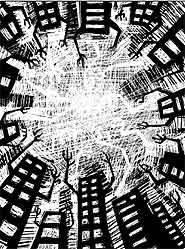 I’ve called Bombay ‘Maximum City’ in my book because it is the maximum of the urban experience, in good and bad ways. If I were now to write a book about Delhi, what would its moniker be? It’s not a maximum city in the same way as Bombay but it’s certainly not a moderate city. My friend Willie Dalrymple gave it an excellent one: ‘City of Djinns’. A discotheque agreed. But it needs another one, which can take in South Delhi as well, and the sprawling suburbs beyond, where the djinns fear to venture.

Bombay and Delhi, in particular, have never quite adjusted to the fact that they share the same country. They are India’s New York and Washington, tolerating each other. Delhi governs India so Bombay doesn’t have to, and is free to make movies and money. When people say nice things about Delhi, it is usually about North Delhi—a very Indian city, with Punjabi families living in ramshackle houses with multiple new additions, sitting on cots under tubelights thick with insects and the lizards feasting on them. It feels familiar, homey.

I have a soft spot for New Delhi. The endless bungalow colonies of that mongrel suburb. I’ve spent many pleasant hours in barsaatis drinking cheap rum with expensively educated friends. And I’ve gone to many a cocktail party at Problem Row, next to Lodi Gardens: the World Bank, the United Nations, the Ford Foundation, the World Wildlife Fund, Save the Children, where everybody discusses what problem they specialise in. "I’m in malaria, what about you?"

When I was a boy I went with my parents to Delhi and stayed at the Gujarat Bhavan. Later I stayed at the YWCA, and then at a very beautiful private house at Jorbagh. I’ve stayed at hotels and friends’ houses, and shopped at markets named after letters of the alphabet. Last September I drove out to my cousin’s house in Haryana, through expressways lined with shopping malls. I could have been in Los Angeles. Delhi, unlike Bombay, is not an island; people can live very far from their inferiors. At this rate, it’s going to spill over into Himachal. So I came to think of Delhi as an Endless City. Endless in space and time. When it is very quiet you can hear the screams of the slaughter of Timur the Lame, blending into the screams of the slaughter of the Sikhs just 21 years ago. As long as there is an India—or parts thereof—there will have to be a Delhi, a necessary evil. .

This piece appeared in the first sample issue of Delhi City Limits.