May The Farce Be With You, Says Rahul To Arun Jaitely After Claims Of Upbeat Economy 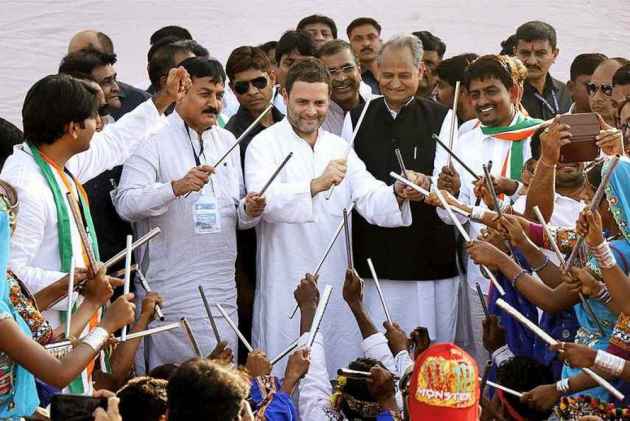 After taking references from Sholay to target GST and calling it a 'Gabbar Singh Tax', Congress Vice President Rahul Gandhi took a jibe at Finance Minister Arun Jaitley today mocking him with a tweaked film's quote, 'May the farce be with you.'

Jaitley had on Tuesday given a presentation on the current status of economy on the country and announced  massive Rs 6.92 lakh crore infrastructure spending and another Rs 2.11 lakh crore for bank recapitalisation to revive investments as well as growth.

A presentation titled 'The India Story: Speeding Up For Take Off!' briefed at the press conference highlighted that the economy grew by 7.5 per cent per annum in the three years of BJP-rule since 2014.

For last three years India has been fastest growing major economy in the world, Jaitley said. "And our intention is that the high growth economy that India has become, we continue to maintain that position."

Gandhi today tweeted a picture of the graph of the economy shared by Jaitley in the presentation and captioned it, 'Mr. Jaitley, may the farce be with you.'

Dear Mr. Jaitley, May the Farce be with you. pic.twitter.com/Dxb5jFCaEa

'May the force be with you' is a popular quote taken from the Star Wars film series. Gandhi tweaked it to accuse Jaitley of 'farce'.

Economy slowed to 5.7 per cent in the April-June quarter of the current, the weakest pace since 2014 as demonetisation sucked out 86 per cent of the currency in circulation throwing cash-dependent businesses in disarray and the implementation of GST from July 1 hit small and medium enterprises.

But Jaitley today reiterated that the economy has grown the fastest in the last three years since the BJP took control.

"It is first time in history that continuously for 3 years India's economy has been one of the fastest growing in world," the finance minister told ANI.