Mayawati Untouchable For Media, Not For The Voters

The truth about Mayawati’s media blackout is far more inconvenient and lies in the social and caste biases inherent in the structure of media. 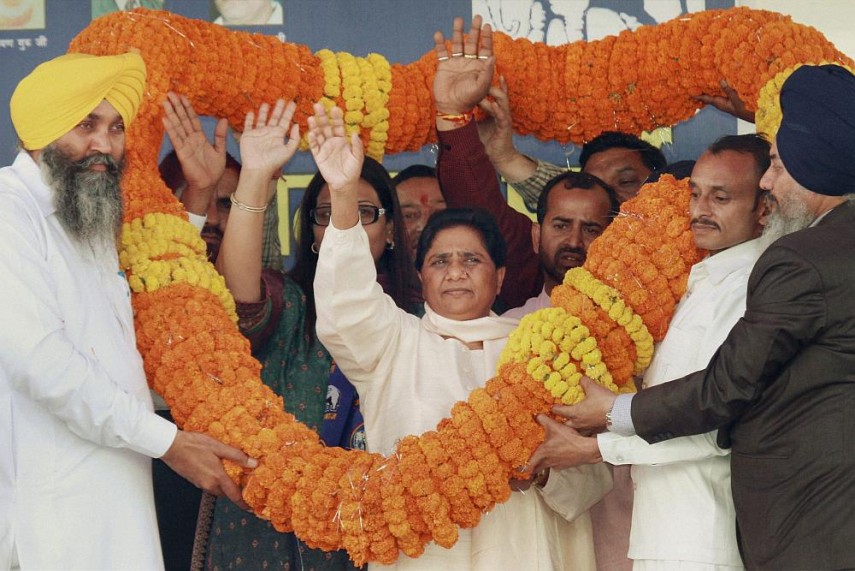 Votes have been cast for more than half of the Assembly constituencies in Uttar Pradesh. The million-dollar question that now stares in the faces of political pundits is that who will form the UP government.

Scanning newspapers and news channels to unravel the mystery will give you an answer that highly favours the saffron tide. The media pundits have been harping on the failure of Samajwadi Party-Congress (SP-INC) alliance, making Bharatiya Janata Party (BJP) appear as the clear winner.

If our great TV anchors were to be believed, then BJP has either already won the elections or is just on the verge of emerging victorious while Akhilesh Yadav and Rahul Gandhi are conspiring to dethrone Prime Minister Narendra Modi. This trend is more dominant in the Hindi and vernacular media, which clearly have a saffron-tint in their reporting.

The spin-doctors are not even ready to acknowledge the fact that Akhilesh Yadav has been chief minister for past five years, and it is actually Narendra Modi and Amit Shah, who are trying to topple Yadav from state’s top post. (Though, this is a perfectly justified poll tactic and a legitimate democratic process.)

Narendra Modi has been playing a vital role in the UP elections, but the onus of a BJP win does not lie with Modi. In case BJP loses, Modi will not be touched, the media spin-doctors would conveniently place the blame on Amit Shah alone.

The battle being portrayed is that of BJP versus SP-INC alliance. What the media is blatantly and deliberately negating is the strong position that the Bahujan Samaj Party (BSP) may have in the polls.

The media seems to have taken Modi’s joke about BSP suffering the most due to demonetization, a bit too seriously. Since BSP had the biggest coffers of black money after note-bandi, the BSP has no money to pay off newspapers and television channels. Thus, the media has nothing to gain by showing behenji in good light.  But money is not the lone factor responsible for Mayawati’s media blackout; the truth is far more inconvenient and lies in the social and caste biases inherent in the structure of media.

So deeply ingrained are these biases that they fail to acknowledge statistics, hard hitting facts and numbers. Sample this: Mayawati has been successfully elected as the UP CM for as many as four times. Before Akhilesh Yadav, she was the only CM in UP to have successfully completed a five-year tenure. Behenji has a formidable mass base, which helped her garner 25.91 percent votes in the 2012 UP Assembly elections and 19.6 percent in the 2014 Lok Sabha elections. When she became the chief minister in 2007 by polling over 30 percent votes, her rival Samajwadi Party got 25.43 percent, which brought 97 Assembly seats to the party, making it the second largest party in the house.

Another question that arises: Is Akhilesh Yadav being given so much importance (after BJP) because his party has entered into alliance with the Congress?

The answers to these questions are more complicated than what it appears. Let's talk first about the importance being given to Akhilesh Yadav. It will be quite correct to say that Akhilesh does not have any charge of corruption against him in his tenure of past five years as Chief Minister. It may also be more or less right to say that he has turned out to be perfect on the yardstick of ‘development’ that all the political parties swear by nowadays. A mere digging or building can be termed as development now. Holistic and sustainable development is now confined to textbooks.

Of all these factors, what stands out is how Akhilesh emerged victorious in the Yadav family feud in the last phase of his rule in UP. This indicates that the tasks he could not accomplish during his term, because of family pressure, may well be taken forward once he wins.

Ignoring Mayawati so blatantly points to a well thought-out strategy by the media and intellectual class. Among the leaders espousing the cause of the underprivileged, Dalits and backward sections of the society in North Indian politics, Mayawati’s is the lone voice. Lalu Yadav too was a prominent voice, but after being convicted, his role in politics has been restricted.

Meanwhile, other political leaders, like Mulayam Singh Yadav, who were born out of the social justice movement, have compromised their style of politics to lure their vote banks.

But Mayawati has been consistent with her brand of politics. She derives strength from the voices of the Dalits. While her stand on communalism has not been very clear. Thrice, in her four times as the chief minister, Mayawati has formed the government with the support of BJP. Yet she never gave BJP a chance to vitiate communal harmony in the state –which has primarily been the saffron party’s agenda. She instead, used the support in her favour to strengthen her vote bank and then very opportunistically washed her hands off BJP.

Another fact that cannot be ignored is when RSS spokesman Manmohan Vaidya pitched in for abolishing job reservations, she was the lone leader, along with Lalu Yadav to oppose it. No one else, including Akhilesh dared to speak up. And why would they? Staying silent on the issue would probably get them the upper-caste votes, so why take the risk?

Mulayam Singh Yadav --who boasted about being the son of the soil and champion of secularism and social justice --has been sidelined by his son. At the same time Akhilesh and Nitish Kumar too, are a league apart from Mayawati’s brand of politics. They do not have a legacy behind them and they find themselves twiddling their thumbs while dealing with communalism. Though they belong to a backward caste, their appearance and style appeal more to the upper middle class. They miss out terribly on social justice scale. Thus, upper-caste dominated media does not have the kind of hatred against Akhilesh and Nitish that it shows against Mayawati and Lalu. And quite understandably, this is precisely why Mayawati is being sidelined by the media, despite being one of the most formidable contenders in UP.

(Writer is Delhi based journalist. Views are personal)