Our reporter attended a documentary film festival in Dharamsala in early November. She writes about her experience... 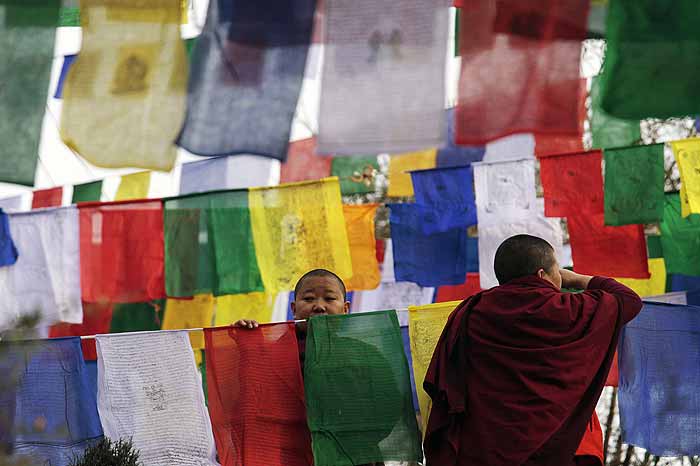 Having moved to Delhi just three months ago, I was enthused by everything the city had to offer. From cultural diversity, the variety of food, the economic opportunities and the political banter, Delhi had it all. But with the big city life, came the conjunct pollution, road traffic and lethargy. What better form of escapism than travelling to the mountains!

With Tibetan national flags hoisted at every few intervals, and "Free Tibet" graffiti adorning the main streets, the little town boasts of a rich population of Tibetans refugees, including the Dalai Lama, claiming exile from the Chinese government. Although the locals complain of the town's growing commercialism, this suburban settlement of India feels like the capital of a new East Asian country, waiting eagerly to be discovered. This has given Mcleod Ganj the nickname of 'Little Lhasa'.

On every corner, a jovial set of monks clad in the authentic Buddhist red robes are seen wandering the narrow, winding roads. The colourful Lung Ta flags, a common Buddhist prayer flag, can be seen on the highest points in the city, adding a distinct colour to the sometimes green, sometimes barren mountains. Pictures of the Dalai Lama are as common a scene as a political banner on the main roads of Delhi.

Although you are devoid of the loud Indian political gossip and eventually start missing Modi's face plastered at every corner, you are made aware of the non-violent protests undertaken by the Tibetans against the Chinese government. You are repeatedly told about the atrocities faced by the refugee Tibetans and their acts of self-immolation as a means of sacrificing themselves to Buddha. Yet another example of when religion intertwines with politics.

On my first day there, I met two American travellers, who informed me to my surprise that they were there in the mountains to take a ten-day vow of silence and to rediscover their inner calm at one of the monasteries. Needless to say, the concepts of 'spiritual purity' and 'calmness of the soul' associated with Buddhism and meditation seem to attract multitude of international hippie tourists with their long dread-locked hair, harem pants and traditional Himachali woolen hats.

For a period of four days, the town awakened from its quiet slumber to welcome the eccentric crowd of filmmakers, volunteers, press and travellers who converged for the fourth edition of the Dharamshala International Film Festival. Even the restaurants that earlier took last orders at 8.30pm, decided to stay open till 1 am for the hungry and eager festival goers.

Still in its early years, the festival has managed to create a unique reputation for itself and screened 30 globally renowned independent films, both Indian and international. For a small town with no cinema theatres, all the arrangements were made at two separate locations (The Tibetan Institute of Performing Arts-TIPA and The Club House) to accommodate the eager audiences. Both locations had been decorated with DIFF banners and posters, Lung Ta flags and fairy lights, making it feel like diwali had arrived early to the town. Local handicraft merchants and restaurants set up stalls at TIPA, selling everything from pizzas, chowmein and momos to wall hangings, ponchos and diaries.

The festival staff and volunteers could be seen scuttling about with their lanyards ushering special guests, organising large crowds and taking pictures and videos. Each day, traditional Tibetan music wafted in the background during the day whilst classic rock and house music erupted from personal speakers on random tables in the evenings.

Alternating between watching the many films on offer, talking to the directors and movie stars present, and visiting the beautiful mountain sights, the crowds squeezed in time to drink copious amounts of mountain chai and enjoy the starry nights near the warmth of the angithees. Although the atmosphere was calm and relaxing, there was an electric feel in the air that left one revitalised.

One day, someone pointed out to me, "look, that's the Tibetan Prime Minister in exile!". Another day, Kanu Behl and Neeraj Ghaywan are seen chatting away with the audiences. Asif Basra was seen enjoying one of the young volunteer's musical endeavours with a ukulele.

A special series of animated short films were aired for the area's school children for whom the cinema is otherwise inaccessible. Despite the good intentions of the organisers, a woman tourist managed to create a scene and attract attention for being denied entry to a completely filled out hall.

Other than this woman's dramatic antics, the film that garnered the most emotional response was Placebo, directed by Abhay Kumar. It featured the abhorrent conditions students faced at a premier government educational institution, and how unsupportive the institution's staff was to their pleas.

The satirical Israeli film Zero Motivation surprised audiences with its witty take on the gender inequalities women are subjected to whilst undertaking their mandatory service with the army. The buzz of most discussions seemed to be the growing popularity of independent cinema in India, and the eclectic mix of films chosen to be showcased.

Tibet is the birthplace of the famous Indian street food  — momos. But unlike the dumplings stuffed with paneer, chicken or mixed vegetable, Tibetan street momos found in McLeod Ganj consist of potato stuffing. Appreciable or not, I'm still indecisive. The locals mix easily with the refugees, creating a rich cultural assimilation of food, religion and handicrafts and a very welcoming atmosphere for tourists.

The town boasts of a number of cafes, each one better than the last. Run by the refugees, I believe each cafe serves some of the best coffee, masala chai, momos, waffles and pancakes in India. Every local I met, took it upon himself to show me the best places to eat thupka, a Tibetan noodle soup, the sights worth seeing and things to buy. Some of the main attractions of the area include the Tsuglag Khang or the Dalai Lama's temple, the Bhagsu waterfall, the Dal Lake and the Triund Hill.