Media In The Modi Era

Having made the rest of media irrelevant, Modi is sharpening the powerful tools of mass reach that are at his beck and call— Doordarshan and All India Radio. 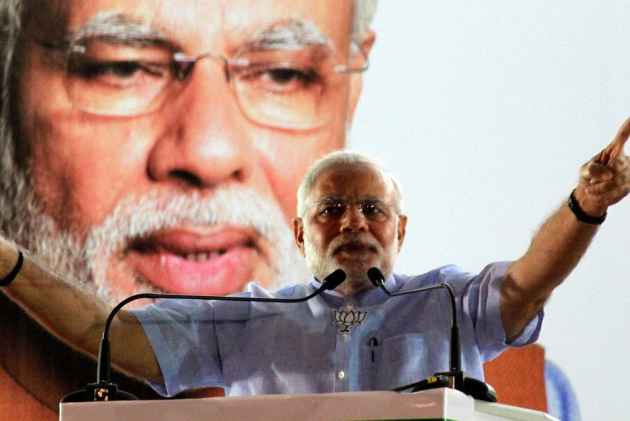 Critics are like eunuchs in a harem: they know how it’s done, they’ve seen it done everyday, but they’re unable to do it themselves. Journalists too are now in such a situation, thanks to the Modi- era in Indian politics.This scenario has never been so acute as it is today, more so in the country’s capital. Delhi’s boastfully bloated population of  cats' whiskers know-alls, who possessed the legendary reputation of worming their way into prized woodworks and spilling out the gore and the gooey along with the gut, find themselves barred access from all sides. The invisible, Laxman rekha carefully etched by Prime Minister Modi is holding firm, keeping the ‘creepy- crawlies’ out. Like it or not, that’s how most in the political power structure look at journalists—an unavoidable nuisance.

As in politics, so in the media. Delhi has for long carried the reputation of being a mercenary, no-holds barred news arena where countless principal combatants meet their waterloo, ground to dust past their fading by-lines and jading careers, every other day.

Like the god-fearing Jains, political descendents of previous orders went around sprinkling info sugar-dust at anthills, hoping to keep themselves out of harm’s way, while friends and foes alike bore the brunt of the news stings. Modi’s advent on the scene as Prime Minister has marked a surgical departure in the manner of government news coverage. In the past, whenever governments changed at the centre, including the BJP- led NDA government headed by Atal Behari Vajpayee, there were, at best, some recalibration. If the BJP came to power, veterans of the beat were moved centre- stage, while the specialists of the outgoing regime were shifted to the sidelines. Modi, however, has ensured a tectonic shift. It is not media which is deciding how the government is to be covered. It is Modi who is laying down the ground rules as to how media shall cover the government.

Ample proof of this was available when news publications and television channels from across the country, and even those down South, began scouring for scribes in Gujarat to cover the PMO and related power corridors in Delhi. They bemoaned that their present personnel were unable to break through. They are still at it, looking for the right ones. The established visual networks proved smarter as they immediately, post-elections, elevated and shifted their Gujarat bureau heads to the country’s capital. Even today, it is not uncommon to find the editorial top brass of national dailies in Delhi pestering, even bullying, their lowly Gujarat reporters for getting confirmation of Delhi- based stories which they themselves have abysmally failed to do.

For journalists in Gujarat, who covered Modi’s governance as chief minister for over 12 years and endured the sanctimonious, sniggering of their Delhi based bosses, it is time to sit back and enjoy their squirming discomfort. For most of them, in Gujarat, it is like a re-run of the same film being made on a grander scale and a larger national screen.

Contrary to expectations, Modi has succeeded much more in taming the media in Delhi than he did in Gujarat. True, he turned the news pyramid upside down in his home state. Like everywhere else, so in Gujarat, the most important beat covered by the veterans is the state secretariat while crime and courts are generally left to the young scribes. By the time Modi left Gujarat, the secretariat had almost become a ‘redundant beat’ as no bureaucrat or minister would speak a word other than what was ordained. The chief minister’s weekly media meet on Wednesdays was done away with, and ditto was the approach of the cabinet ministers-spokespersons, who came instead, always in pairs, rarely singly and never ever exceeded their brief.

News leaks whether by bureaucrats, ministers or party leaders led to a trackdown with serious consequences. Seasoned bureaucrats avoided being seen talking to reporters and a minister, faced with a grim situation, lost control of his bladder movement, that too in a cabinet meeting.

During the 2002 communal riots that followed the Godhra train carnage, Modi had found considerable support from the vernacular media while the English media found itself labelled as the villain of the piece. Soon after, the Gujarati papers also fell out of Modi’s favour. In the meantime, Modi embarked on his statewide Gaurav Yatra with a one- point agenda of establishing a direct rapport with the majority community, mindless of the disconnect it would cause with the minority (in any case, they would not vote him). The strategy paid off and Modi won the 2002 Assembly elections with a massive majority. He never looked back thereafter, though the tiger changed his stripes in the interregnum to become the king of the jungle, responsible for the welfare of all his subjects.

Modi’s Gaurav Yatra and the stunning results achieved in the 2002 Assembly polls were crucial in framing his future media strategy. He realized that the best way was to reach out straight to the masses, by-passing the established media, whose peak- hostility had also failed to dent the 2002 results. On the contrary, the results proved the media’s virtual irrelevance. Modi realized early in his official career that the more you wallop it, the more it follows you.

It was in pursuit of his ‘direct rapport with the masses’ policy that he set up an audio-visual unit within the government which produced regular CDs of the CM's programmes that were shown by local cable networks of the time in rural areas, towns and cities once in the afternoon-time when womenfolk get free in the villages and once in the evening. A local sub-inspector was all that was required for compliance. The 7 PM news bulletin in local TV channels was preceded by a 15- minute spot of government news which had been brought over. High profile government functions were held with full page, nationwide advertising. The sate, for all the 12 years under Modi, projected only one face across the media.

Thus it is that Delhi is just an immensely improved, vastly more resourceful, more compliant replay of Gujarat. Modi is sharpening the powerful tools of mass reach that are at his beck and call— Doordarshan and All India Radio. Trust him to transform both, to deliver exactly what he wants. His ministers and his bureaucrats have been force-fed the golden value of silence and most have learned it better than those of their ilk did in Mrs. Indira Gandhi’s time. Like in Gujarat, so in Delhi, only one name rises head and shoulders above the rest.

Watch any news channel, read any newspaper including the economic and financial dailies , it is the same story. What Gujarat did yesterday, Delhi wants to do today— and tomorrow.

And the best of them all keep coming back for inspiration to Modiland regularly!