29-year-old singer-songwriter Ali Saffuddin's song absorbed the strong impact of politics in Kashmir while delineating the divine beauty of Kashmir as well. “May this abode of saints of ours be blessed with playing and frolicking ever/ may these waterfalls, green pastures and cooling snows last forever”

When Ali Saffudin started writing this song in the summer of 2016, it was set out to be a song of yearning, desire and most importantly of hope. And just then, in July, Burhan Wani, a popular militant commander, was killed. The valley saw protests, communication blockades and prolonged shutdowns. That year 112 young protesters were killed by police and security forces bullets, and 1200 youngsters including girls were blinded by pellets.

Saffudin couldn’t write the song beyond the first lines. It took him months to complete it and around four years to release the music video in May 2020. He was supposed to release the video in August 2019. But he couldn’t keep the deadline as a communication blockade imposed after the abrogation of Article 370 on August 5, 2019, cut Kashmiris from the world.

The song still started with hope, but the artist had absorbed the politics of his homeland into his song, something most artists in the valley steer clear of.

In the music video, you see beautiful gushing streams, mountains, you see Saffudin riding his bike on the iconic Boulevard road singing a young man’s ode to Kashmir’s beauty in his unique, husky voice. And almost in the middle of the song, flashes of a funeral procession fill the screen for a moment and the lyrics change to similes of pain. The transformation is blunt yet flawless. Perhaps the most striking visual in the video is the fast roll of pictures showing some of the kids and young men killed in Kashmir in the last decade. It starts with photos of Tufail Mattoo (He was 17 when he was killed in 2010) and Wamiq Farooq (He was 13 when he was killed in 2010) and ends with a photo of Basim Aiajaz. Aiajaz was 13-years-old when he was killed after a wall at an encounter site collapsed and caused him severe burn injuries. The four-second clip showed photos of a total of 10 dead Kashmiris. Saffudin sings:

“The blooming flowers, who got nipped in the bud/Let us remember them often at every occasion”

Another visual shows kin of disappeared people with the pictures of their lost ones in hands; a routine, normalised annual affair in Kashmir since decades. The song of hope comes a full circle, contextualising the meaning of hope and longing for Kashmiris.

“It took me long to write Asaan Gindaan,” Saffudin says. “I wrote this song on a very positive note but then noting remains positive in Kashmir. There were civilian killings. And I wrote “Gul teye gulzaar yemow rout mazaar (The blooming flowers, who got nipped in the bud). It has this mixed feeling of life in Kashmir for Kashmiris. One day a Kashmiri moves around happily as if everything is normal and the next day something happens that takes everything from him,” Saffudin says. 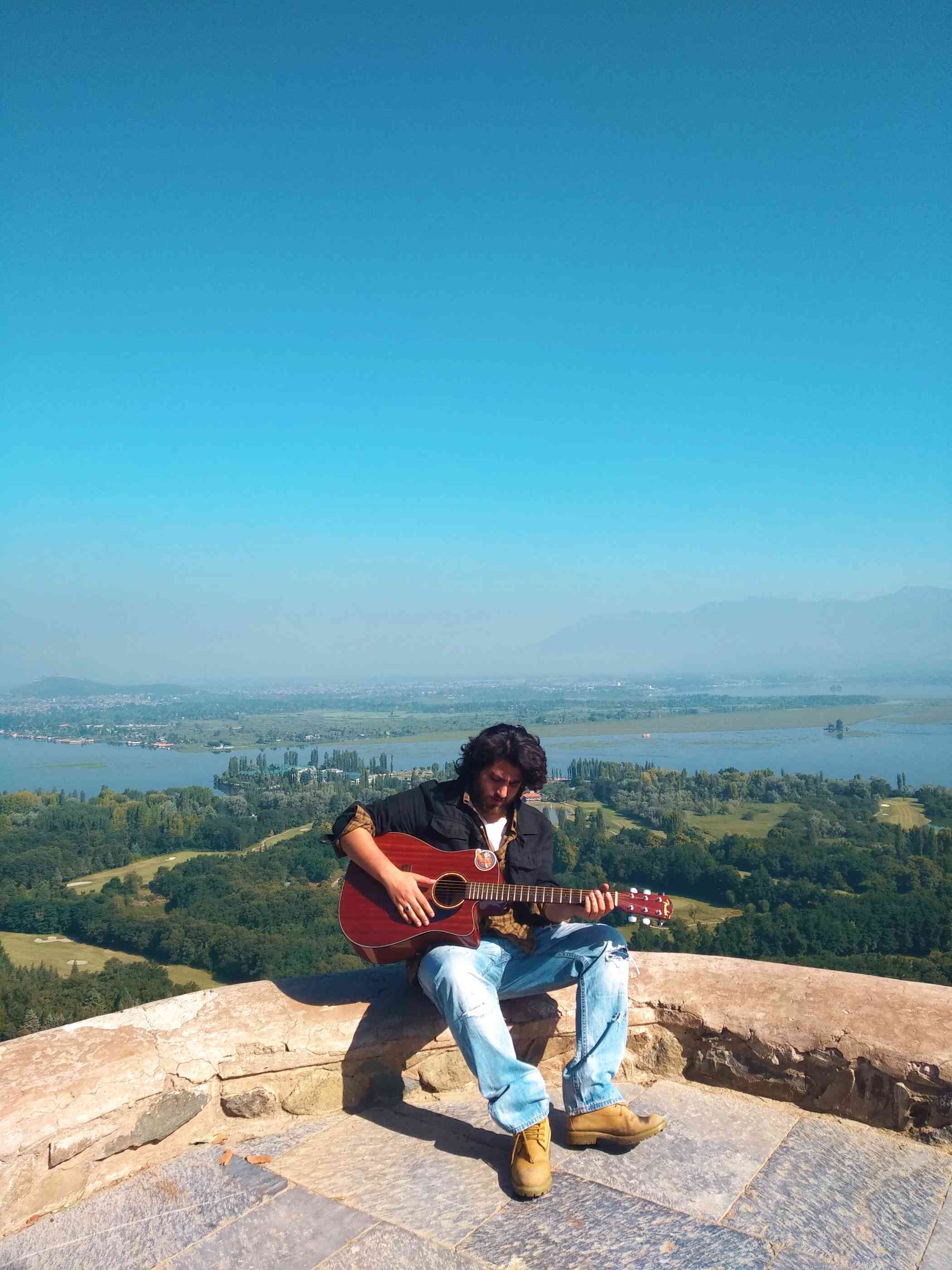 The 29-year-old singer-songwriter was into music from an early age. His nawahs--elegies on the martyrdom of Hussain, grandson of prophet Muhammad--were popular in his Shia neighbourhood of Hassanabad in Kashmir. In 2014 came back to Kashmir from Delhi where he did his bachelors in arts from Delhi University’s south campus, and enrolled for a masters in mass communication from Kashmir University.

Asaan Gindaan was finally released in May 2020 a year after the abrogation of Article 370, Saffudin sees the song as a tribute to Kashmiris who have been suffering immensely for the past three decades an yet haven’t given up hope and they haven’t given up living. “I feel very survival of Kashmiris, their engagement with everyday work in spite so much of trauma around is itself resistance. Our existence is resistance. And Asaan Gindaan is a tribute to that existence,” he says. 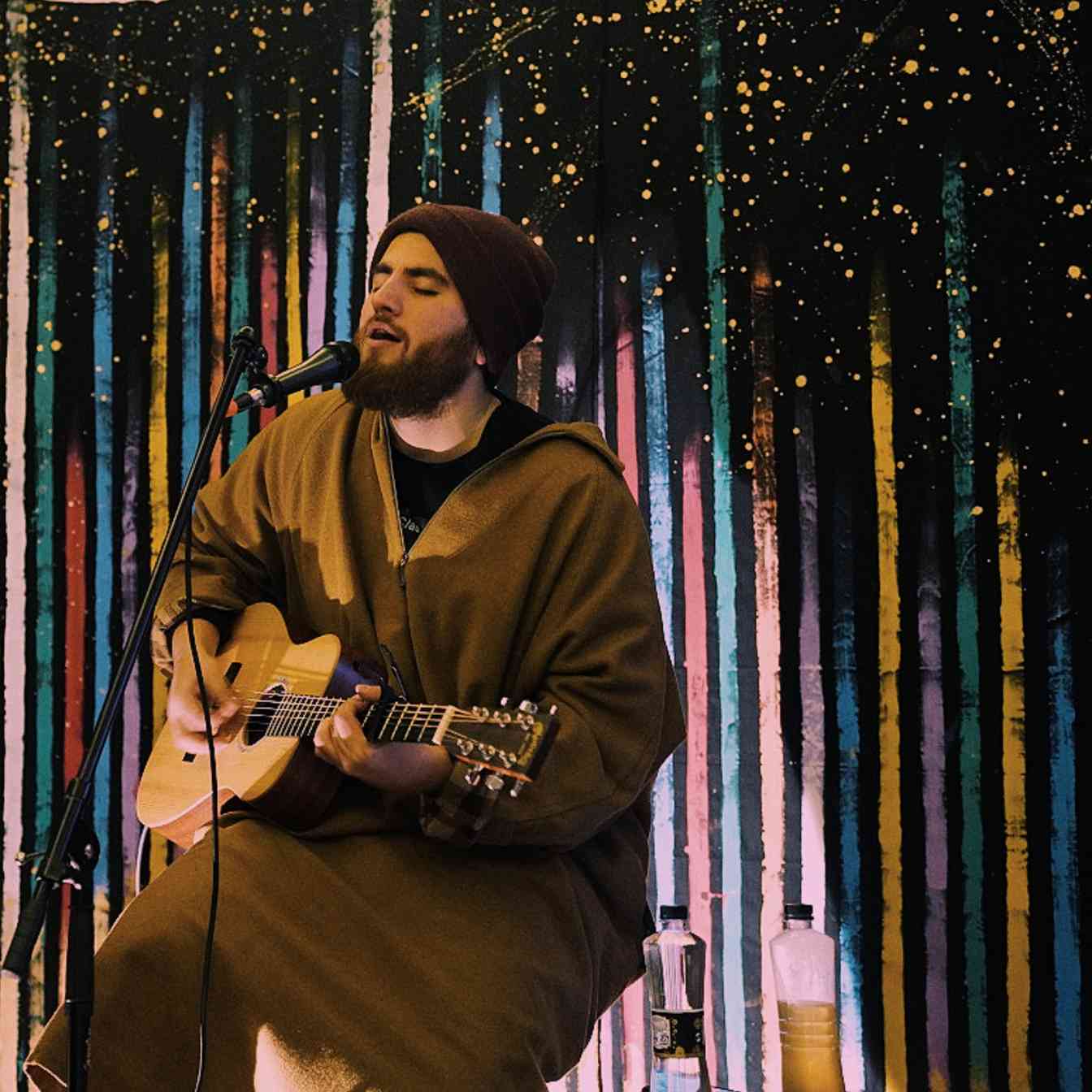 Unlike most artists in Kashmir at the moment, who base their politics as the underlying theme of their work, but desist from explicit expression, Saffudin’s prefers to be forthright in his politics. “Music brings a lot of responsibility in a place that of Kashmir. My songs have imagery of oppressed people. That is my politics. I keep it consciously. This is not to exploit sentiment as is being alleged. There is no monetary benefit in it. You only face adverse situations due to it. But it gives me an inner satisfaction.”

The young generation of pop singers, like Saffudin, are particular about the imagery they use in their songs and it is, perhaps, due to these factors perhaps, that the songs reverberate as well as they do with the young Kashmiri audience of today.

Recently more and more young singers from the valley are echoing the trauma and troubles of Kashmiris, through their songs.

Singer and songwriter Faheem Abdullah’s Jhelum roya has powerful visuals of shrines, graveyards and of course of the river Jhelum. The video begins with lines from Agha Shahid Ali’s poem “I See Kashmir From Delhi at Midnight” and is dedicated “for the women of Kashmir, who have lost their fathers, brothers, husbands and sons.” It has over a million views on YouTube, and over five thousand comments, one which quotes from another of Ali’s poems: “We shall meet again, in Srinagar, by the gates of the Villa of Peace, our hands blossoming into fists till the soldiers return the keys and disappear”

Singer and songwriter Ishfaq Kawa’s Nund Bani is about a mother’s extreme trauma after her son’s disappearance. The music video has nearly 8 million views and thousands of comments on YouTube where people have identified with the loss and trauma depicted in this work of art.

All over Kashmiri social media, there are young women and men singing and sharing their art and music with the world, that is, as long as the internet is working. Along with Saffudin, Kawa and Abdullah, a number of young musicians have captured an audience for themselves in Kashmir through music that is not always necessarily political but tries to imitate Kashmir and capture all shades and seasons of the place. The fact that young artists now have platforms like YouTube and other social media sites to build and reach an audience, has also helped. In the last seven, eight years, and particularly after the 2016 unrest, there have been tectonic change in the music scene of the Valley with independent young musicians’ producing their own music.

Saffudin is perhaps the most popular of the lot. Working through last decade he has become a much-loved pop-folk singer of Kashmir who rose to fame with folk songs which he reworked into pop music without, for large part, tarnishing the original essence of the melody. In fact Saffudin’s most popular songs are his renditions of popular ballads by 16th-century poetess Habba Khatoon including, Gah Chon, Rah Bakshtam and Chol Hama, bringing old and the new together.

Your light illumines the darkness, will you come to me once

“Folk music is our inheritance. Take Chol Hama. It was written by Habba Khatoon some 400 years ago. It has reached us through generations. What can we do it except keep it folk add some pop into it,” says Saffudin.

“I just want to be honest because I feel like it takes the weight off your shoulders,” he says with a tinge of sadness in his voice. “If there is no honesty in the music then I have immediate repulsion towards it. There has to be honesty in artistic expression.”

Besides Kashmiri folk, Saffudin is influenced by blues, sufi-rock band Junoon as well as Coke Studio. He says the blueprint for his songs was laid by Junoon. He says Coke Studio taught him that “two sounds could be merged to make another, different soothing sound without original losing essence.”

He studied blues to understand how black Americans were able to create a sound for themselves when their identity was enslaved were subjected to severe oppression. “Blues music became a channel for the Black Americans to preserve their identity. In the same way, Kashmiri music and poetry and art, have over the centuries survived and it has succeeded in preserving in showcasing that cultural and identical roots can be preserved in extreme repressions whether you sing centuries-old Chol Hama or Raha Bakshtam.”

In his recent performance at the Sheri Kashmir Institute of Medical Sciences, when Saffudin sang:

“I too am capable of speech

Just ask me what I want today”

The students--who had been hounded after a controversy had erupted over allegations of pro-Pakistan cheering at the institute during the India-Pakistan cricket match of the T20 World Cup--joined Saffudin in chorus, singing “kash puchho ki mudda kya hai”

"There is so much pain in our kaash," says Saffudin.