Wherever we live, whether it's a hamlet in Holland or a skyscraper in Seattle, we will not be untouched by what happens in megacities like Bombay. On July 27, 2005, Bombay experienced the highest recorded rainfall in its history – 37 inches of rain in one day. The torrent showed the best and the worst about the city. Hundreds of people drowned. But unlike New Orleans, after Katrina hit, there was no widespread breakdown of civic order; though police were absent, the crime rate did not go up.

That was because Bombayites were busy helping one another. Slum dwellers went to the highway and took stranded motorists into their homes and made room for one more person in shacks where the average occupancy is seven adults to a room. Volunteers waded through waist-deep water to bring food to the 150,000 people stranded in train stations. Human chains formed to get people out of the floodwaters. Most of the government machinery was absent, but nobody expected otherwise. Bombayites helped one another, because they had lost faith in the government helping them. 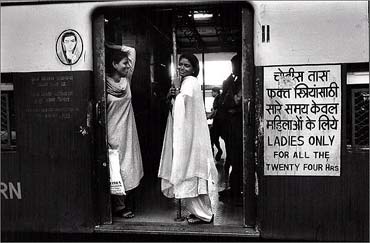 On a planet of city dwellers, this is how most human beings are going to live and cope in the 21st century. Wherever we live, whether it's a hamlet in Holland or a skyscraper in Seattle, we will not be untouched by what happens in megacities like Bombay. Disease and genius, crime and religion, poverty and wealth, are all maximized there, and, given the cheap availability of air fares, are coming soon to a theater near you.

With 15 million people, Bombay is the biggest, fastest, richest city in India, a city simultaneously experiencing boom and civic emergency; an island-state of hope in a very old country. Because of the reach of the Bollywood movies, Bombay is also a mass dream for the peoples of India. Everything – sex, death, trade, religion – is lived out on the sidewalk. It is a maximum city, maximum in its exigencies, maximum in its heart.

Every day is an assault on the individual’s senses. The exhaust is so thick the air boils like a soup. There are too many people touching you, in the trains, in the elevators, when you go home to sleep. You live in a seaside city, but the only time most people get anywhere near the sea is for an hour on Sunday evening on a filthy beach. It doesn't stop when you're asleep either, for the night brings the mosquitoes out of the malarial swamps, the thugs of the underworld to your door, and the booming loudspeakers of the parties of the rich and the festivals of the poor.

Why would anyone leave a brick house in the village with its two mango trees and its view of small hills in the East to come here? 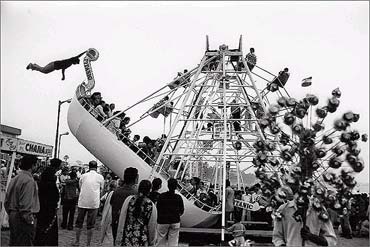 So that someday the eldest son can buy two rooms in Mira Road, at the northern edges of the city. And the younger one can move beyond that, to New Jersey. Discomfort is an investment. Like ant colonies, people here easily sacrifice temporary pleasures for the greater progress of the family. One brother works and supports the others, and he gains satisfaction from the fact that his nephew takes an interest in computers and will probably go on to America. Bombay functions on such invisible networks of assistance. In a Bombay slum, there is no individual, only the organism. There are circles of fealty and duty within the organism, but the smallest circle is the family. There is no circle around the self.

India frustrates description because everything said about it is true and false simultaneously. Yes, it could soon have the world's largest middle class. But it now has the world's largest underclass. And so with Bombay: Everything is expanding exponentially: the call centers, the global reach of its film industry, its status as the financial gateway to India, as well as the slums, the numbers of destitute, the degradation of its infrastructure. The city's planners have set their eyes on Shanghai as a model for Bombay. The government has approved a McKinsey-drafted document titled "Vision Mumbai," aiming to turn Bombay into "a world-class city by 2013." As the architect Charles Correa noted of the plan, "There's very little vision. They're more like hallucinations."

Bombay needs to upgrade dramatically essential civic services: roads, sewers, transport, health, security. But, as one planner said, "The nicer we make the city, the more the number of people that will come to live there." Most migrants to Bombay now come from the impoverished North Indian states of Uttar Pradesh and Bihar. Bombay's problems cannot be solved without solving Bihar's problems. And that means that agriculture has to become viable again for the small farmer. Abolishing trade-distorting subsidies in the US and the EU would go a long way toward making, say, Indian cotton competitive with US cotton. Bombay is at the mercy of national and international factors beyond its control. Its fate will be decided not just locally, but – given India's overcentralized decision-making – in New Delhi and in the course of arcane, secretive trade negotiations in Washington and Geneva.

Indian governments could take some immediate steps. There’s no reason Bombay should be the capital of Maharashtra state. Shifting the state government to Navi Mumbai across the harbor, as originally intended, would free large amounts of space in the congested office district of Nariman Point. Beyond that, legislation should establish a strong executive authority for the city, with real decision-making power. The office of the mayor is currently no more than a figurehead; the city is run at the whim of the chief minister, and the state's interests are not necessarily those of the city. Smart and brave architects and planners attempt to work with the state government. The city, which contributes 37 percent of all taxes paid in India, gets only a small fraction back from the central government in the form of subsidies.

There is also no reason Bombay should have a naval base, which currently occupies a large part of the island city. It could be relocated further down the coast. Efficient utilization of the eastern docklands area could also alleviate the pressure for land; instead of schools, parks, public spaces, the city gets luxury housing and shopping malls. In the city’s center, 600 acres desperately needed for public use have instead been given to developers – a bad augury for the city.

So why do people still live in Bombay? "Bombay is a bird of gold," a Muslim man in the Jogeshwari slum, whose brother was shot dead by the police in the riots and who lives in a shack without running water or a toilet, told me. A Golden Songbird, it flies quick and sly, and you must work hard to catch it, but once it’s in your hand, a fabulous fortune awaits for you. This is but one reason why anyone might still want to come here, leaving the pleasant trees and open spaces of the village, braving the crime and the bad air and water. It’s a place where your caste doesn't matter, where a woman can dine alone at a restaurant without harassment, and where you can marry the person of your choice. For the young person in an Indian village, the call of Bombay isn't just about money. It's also about freedom.

Suketu Mehta is a fiction writer and journalist based in New York. His first book, Maximum City: Bombay Lost and Found, was a Pulitzer Prize finalist. Photos are from Bombay Jadoo, a book of photographs by Betsy Karel, with text by Ardashir Vakil and Suketu Mehta, published by Steidl in Germany. "Jadoo" is the Hindi word for magic. Rights: © 2007 Yale Center for the Study of Globalization