According to reports, the Duke and Duchess sought protection from Taylor Swift's bodyguards on their trip and even had her head of security with them at all times. 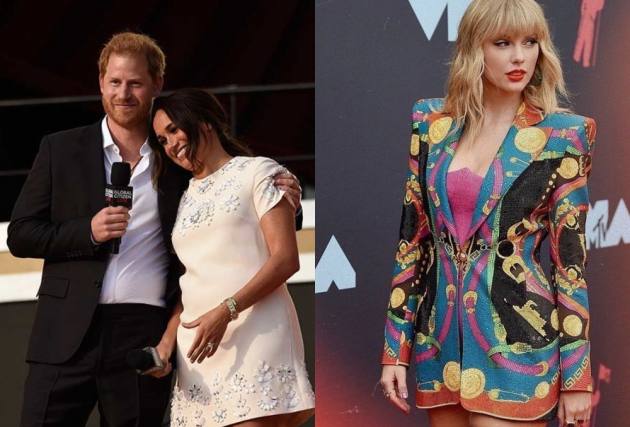 According to The Daily Mail, the Duke and Duchess sought protection from Taylor's bodyguards on their trip and even had her head of security with them at all times. While the tabloid deemed it unclear if the singer "loaned Meghan and Harry her guards during their stay" or if they just "happened to hire them from the same company."

If the royal couple has borrowed Taylor’s security team, it wouldn’t be the first time they’ve asked for help from American celebrities. The couple borrowed Tyler Perry’s security when they were moving continents. Meghan and Harry’s security detail has been an issue ever since the couple moved to the States back in January 2020 and the royals refused to continue paying for their protection.

The couple even spoke about this in detail during their explosive interview with Oprah, during which Meghan explained that Archie wasn't going to be given security either—which is one of the reasons they wanted him to have a title. If you’ve forgotten, in the interview, Meghan said, "They said [Archie's not going to get security] because he's not going to be a prince. Okay, well, he needs to be safe, so we're not saying don't make him a prince or princess, but if you're saying the title is what's going to affect that protection, we haven't created this monster machine around us in terms of clickbait and tabloid fodder. You've allowed that to happen, which means our son needs to be safe."