Officials said the Peoples Democratic Party chief, who was accompanied by some party workers, returned home after paying tributes to her father, who died on this day in 2016. 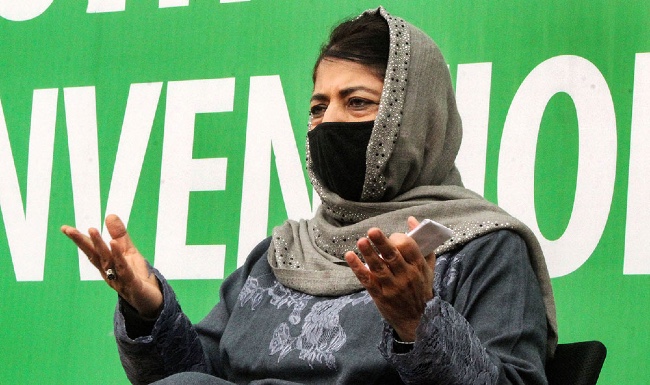 PDP president Mehbooba Mufti on Friday paid tributes at the grave of her father and party founder Mufti Mohammad Sayeed in Jammu and Kashmir's Bijbehara on his sixth death anniversary and alleged that authorities prevented party workers from visiting.

Later, Mehbooba took to Twitter to thank everyone who remembered her father on his death anniversary. "On Mufti Sahab's sixth death anniversary, Id like to thank everybody who paid rich tributes to him. We continue to believe & strive for his vision of a dignified & empowered J&K," she said. She also hit out at the administration for allegedly not allowing PDP workers to visit Sayeed's grave.

"Meanwhile J&K police is hounding my party workers who dared to offer fatiha at his grave today. Outlawing & criminalising even a simple act of paying respect & tribute to one's leader shows state administration's deep paranoia & intolerance," she said. Mehbooba posted a video on her timeline in which she is seen arguing with a police officer who allegedly misbehaved with an unidentified PDP leader.

He said Sayeed was passionate about politics as a tool of reform and relentlessly strived for the development of all the regions of Jammu and Kashmir. "Mufti sahib was a self-respecting, seasoned and thinking politician. Irrespective of the differing political spaces that we occupy, he rose above party politics and was extremely respectful in his dealings with us. His untimely death has left a huge void in the politics of J&K," Lone said.