Imagine if the kind of traffic chaos that is caused by the Kanwariays was caused by equally large numbers of Christians and Muslims? 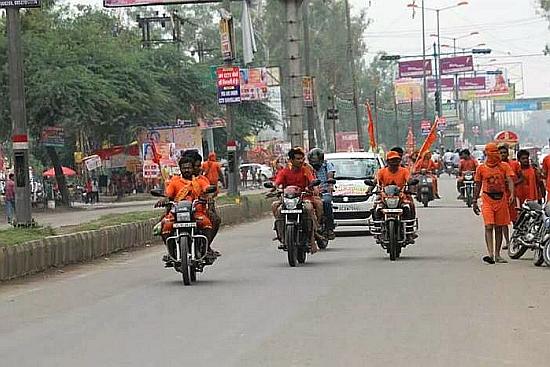 We live in cities with millions of people but go about our lives as if we are the only ones occupying urban spaces. At the most, our courtesies are extended to small groups of people we know. A city is full of strangers but we have not developed ways of living cooperatively with strangers. This is an important reason why our cities are nightmares of daily life.

The recently concluded Kanwariya procession that passes through many Indian cities every year around this time is a ritual that not only tells us something about religious belief, it is also an event that exposes the cultures of private interest that increasingly characterise 'New India'.

While pilgrimages might have ancient lineage, their place in the present should be understood as part of the problems and processes of the present. Shiv-bhakts marching along lanes, streets and highways, with security provided by the state, and food, water and rest facilities by a variety of neighbourhood organisations are a reflection of a deeper malaise.

Let's first rid ourselves of the notion that the march of the Kanwariyas is purely a religious event. In our times, it is increasingly difficult to maintain the idea of a 'purely religious' event, quarantined from a variety of other processes. These could be party politics, identity politics, economic strategies and media driven hype.

In this vein, the Kanwariya pilgrimage is also an annual ritual of male bonding. Though women also take part in the procession, their numbers are minuscule. The male-bonding aspect of the march is part of the larger context regarding the nature of our public places. Our public places are significantly male, with men of all classes and other backgrounds exercising a monopoly over them.

The Kanwariya procession reinforces certain notions of masculinity and its 'right' to public spaces. It naturalises the idea of the men may do whatever they like in public spaces and have a right to them. It also reinforces the notion that wanton masculine behaviour — including the symbolic and actual violence that the processionists subject passers-by to — is an acceptable and normal part of public life.

Our cities are the site of a great deal of masculinised violence and we do not require further reinforcements of this form of deeply gendered expressions of behaviour.

Secondly, the annual march of the Kanwariyas is part of a larger trend where the state allows certain kinds of disruptive activities but not others. Imagine for a moment if the kind of traffic chaos that is caused by the Kanwariays was caused by equally large numbers of Christians and Muslims? What would majority public opinion say? There would most likely be talk of special interest groups encroaching upon the interests and well-being of broader society, and, 'appeasement of minorities'.

The answer to this is to treat all groups equally through being mindful of what the 'public interest' actually is: it is that which extends to as a large a population as possible without any favour to any one group. The state currently favours one particular group through making arrangements for their journey at public expense.

How is it, for example, that Muslims are prevented from praying at mosques that are treated as 'protected monuments'? Can Muslims also not claim that, just like the Kanwariyas, they too wish follow their religious inclinations irrespective of the fact that their activity might, say, damage a historically significant structure?

When the Kanwariyas pay no heed to public life and sentiment — that which rides in buses, bicycles, motor-cycles and cars — why should other religious groups be expected to? And yet the state supports the activities of one group and prohibits that of the other. Cities are meant to be places where one finds freedom from the arbitrariness of village life — marked by the unequal power of dominant groups, say — rather than just a hi-tech version of rurality.

Finally, think of the nature of the city itself: how many claims can it sustain upon its social, cultural, economic life before it becomes nothing but a dog-eat-dog world given over to those who are most successfully able to make their claims through brute show of strength? Public roads are given over to wedding-marquees and dinner tables, loud music blares beyond the permissible time limit because the organisers of some celebration or the other have the 'blessings' of the local MLA, footpaths are converted into parking spaces for SUVs and a city's green spaces are encroached upon by the 'farmhouses' of the economic and political elite.

It is impossible to question this form of erratic — and anti-public — urban activity till we also develop a sympathetic attitude towards urban spaces, one that is clear about the kinds of activities such spaces are able to sustain without disrupting and damaging the fabric of urban life. The urban fabric is extremely delicate, for it is made up of series of networks that have fragile relationships with each other. When we favor one kind of network, we invariably upset the balance of urban life.

The march of men with flags of their allegiance can only further a wild-west and anything goes mentality that our cities can ill afford.