"If anyone else had faced this amount of crisis and problems, they would have committed suicide or would have left the party. (But) I tolerated everything for Amma," he said. 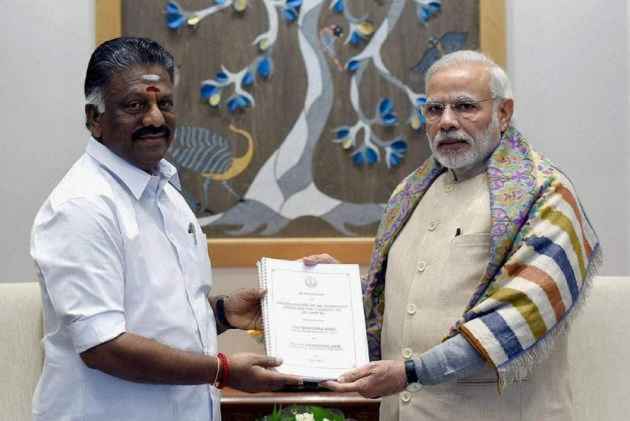 Tamil Nadu deputy chief minister O Panneerselvam, who last year merged his faction with that of Chief Minister K Palaniswami, has said that he had acted on a suggestion from Prime Minister Narendra Modi.

Speaking at a party office-bearers meeting at Theni yesterday, the AIADMK coordinator said that the issue came up during a courtesy meeting he had with Modi in New Delhi last year.

"He (Modi) said that you (Panneerselvam) could join (merge the faction) to save the party," the deputy chief minister said, without specifiying the exactly when the conversation took place.

The merger of the two AIADMK factions took place in August 2017.

Panneerselvam, who had become chief minister of the state following the death of his predecessor J Jayalalithaa in December 2016, said he told the prime minister he did not want any cabinet position and can settle for a party post.

But the prime minister wanted him to join the ministry headed by Palaniswami, he said.

The deputy chief minister said he had conveyed the same to two of his cabinet colleagues from the Palaniswami camp prior to the merger, and that they also insisted he accept a minister's post.

"That is why I am a minister today. I have no desire to be a minister. Amma (Jayalalithaa) made me MLA four times and chief minister twice. That honour itself is enough for me," he told the gathering.

Panneerselvam took over as chief minister twice-- in 2001 and later in 2014-- when Jayalalithaa was convicted in two different cases.

In 2014, Jayalalithaa and her confidante Sasikala were convicted in the Rs 66.66 crore disproportionate assets case.

Panneerselvam, who revolted against Sasikala and her family last year after allegedly being forced to make way for her elevation to the chief minister's post, charged that her family members tried to work for his defeat in the 2016 polls. Sasikala, however, could not become the chief minister due to her conviction in the graft case.

"If anyone else had faced this amount of crisis and problems, they would have committed suicide or would have left the party. (But) I tolerated everything for Amma," he said.

Meanwhile, senior AIADMK leader and Fisheries Minister D Jayakumar declined to comment on Panneerselvam's remarks about Modi's suggestion on merging his faction, saying the remark could have been made during a one-on-one meeting between the two.

He, however, said the party would welcome anyone making suggestions for the AIADMK's well-being.

"If someone says govern well, take forward Amma's rule and if that family (of Sasikala) is not required, we will see the postives in it," Jayakumar told reporters in Chennai today.

The BJP's state unit also declined to comment on the development.

Party's state unit president Tamilisai Sounderrajan said that "during a conversation, the prime minister may have said something but I don't have a right to give an opinion on that."

"He (Modi) might have given suggestion, there could have been an exchange of ideas, you should only ask him (Panneerselvam)," she said.