Actors Ayushman Khurana and Raveena Tandon address the issue of workplace harassment in and out of the film industry. 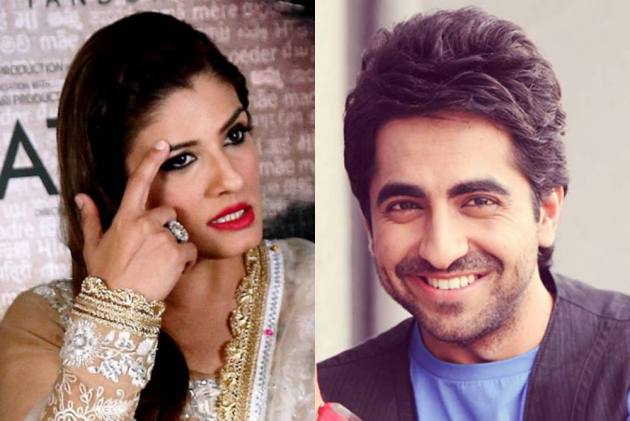 Reacting to the #MeToo campaign that has gathered momentum in India, especially in Bollywood, Ayushmann Khurana told the media, "The #MeToo movement is a good movement, but at the same time, I feel both parties should be given equal opportunities to share their account and to prove their innocence.

"There should be stringent rules at every workplace. It is not only about the workplace, but I think that the code of conduct should be followed in every sphere of society, be it our family or where we live."

Union Women and Child Development Minister Maneka Gandhi has announced the formation of a committee of four retired judges and a lawyer to examine all issues emanating from #MeToo, a movement against sexual harassment.

"Women should feel safe whether it's in journalism or sometimes we go to shoot, our films are in outdoor locations. We shoot there till late nights and not a single woman should feel unsafe there and men should understand what consent is and without that, you cannot do anything to anyone.

"No one can touch another person without his or her consent and if anyone does that, then strict action should be taken against that individual."

Raveena Tandon, supporting the #MeToo movement said that even though she has not been a victim of sexual harassment, the countless stories of ill-treatment of women anger her.

The 43-year-old actor said that she has been through "professional harassment" in the film industry and hence understands the trauma.

"I was never sexually harassed as I was not the one to just take it. I would give it back. But I can imagine the trauma that the young girls go through. It is so sad and disheartening to hear these stories. It angers me."

Talking about her harassment experience, the actor said that it was a disturbing phase as her reputation was maligned.

"They work in tandem to ruin an actress's life," she added, without taking any names.

In a cryptic tweet, recently, Raveena had said, "What defines harassment in a workplace? The fact that many industry wives and girlfriends are silent observers or instigators when actor husbands destroy the careers of actresses after the chase and flirtation is over or have them replaced with other potential targets."

When asked about the same, the National Award-winning actor, said, "Sometimes it is women also who are complacent because of insecurity or professional jealousy and have gotten other actresses removed from a project using their hero boyfriend or husband. And this is not fair."

"It might not be sexual harassment but it is professional harassment. The clauses in the contracts need to be strong. If certain people have a problem working with the actress then they should step away. Why ruin the girl's career?"

"...There used to be an entire camp that used to work against the women including the entertainment media, the editors used to be hand-in-glove with the hero or director or producer. They (media) were either offered a lot more money or a bigger cover.

"Women would have the entire system working against them. This happens not just in the film industry but other professions as well," she said.

Raveena said she is happy that women are finally being heard and is hopeful that the moment will bring the much-needed change in gender dynamics.

Last week, Cine and TV Artists Association (CINTAA) said, they will be setting up an advisory committee to deal with sexual harassment in the industry, which will have actors Swara Bhasker and Raveena among others as members.

Raveena's advice to women is to take a legal action, besides approaching the film bodies and associations.

Actors like Aamir Khan, Akshay Kumar and Hrithik Roshan have also taken a firm stand against their colleagues, who have been accused in sexual harassment cases.