Manchester United progressed past Milan in the Europa League as substitute Paul Pogba scored the only goal in the second leg. 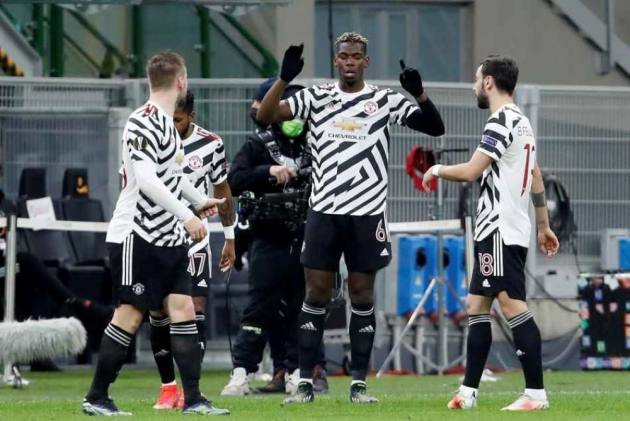 Substitute Paul Pogba marked his return from injury with the only goal as Manchester United defeated Milan 1-0 at San Siro to reach the Europa League quarter-finals. (More Football News)

Pogba had missed United's previous 10 games due to a thigh issue suffered in the 3-3 home draw with Everton in early February, yet he did not take long to make an impact on proceedings in the second leg.

Having replaced Marcus Rashford at the break, the France international cleverly fired in a loose ball in the 48th minute to secure his side a 2-1 aggregate triumph.

Zlatan Ibrahimovic - back from injury himself in time to feature off the bench – was unable to help Milan manage a response following his introduction, meaning the Serie A side have now failed to win five in a row at home.

2 - Paul Pogba has scored just his second ever goal as a substitute for Man Utd, in what is his 31st appearance from the bench for the club (also scored v Brighton in Sept 2020). Arrival. #UEL pic.twitter.com/mDFMoVxndL

United had triumphed 4-0 on Italian soil in the previous round, albeit that was against Spanish opposition in Real Sociedad, with their tie moved to Turin due to travel restrictions in place due to the coronavirus pandemic.

They started brightly in Milan too, yet it was the hosts who created chances towards the end of the first half. Alexis Saelemaekers tested Dean Henderson from distance, while Rade Krunic volleyed wide under pressure just before half-time.

The hosts – as they had done at Old Trafford – were assuming control for long periods.

However, Pogba punished Milan after they had failed to clear Daniel James' deflected shot, using a feint to create the space to lift the ball over goalkeeper Gianluigi Donnarumma from a tight angle.

Henderson came to United's rescue to deny Ibrahimovic, and Pogba came close to doubling both his and the visitors' tally, looping a header onto the roof of the net. In the end, though, one goal was enough.

Milan's slump continues; Stefano Pioli's squad have now won just twice in their last 10 outings, during which they have gone out of two cup competitions and slipped off the pace in the Serie A title race.

In contrast, United are now 14 unbeaten in all competitions. Catching neighbours Manchester City in the Premier League is nigh-on impossible, so Europe - along with the FA Cup - offers a huge opportunity for Solskjaer to claim silverware, further strengthening his position amid continued improvement.

A United front at the back

Pogba gets the headlines after his goal secured qualification for the last-eight draw, which takes place on Friday, but United's defensive line also deserves great praise.

Victor Lindelof, who produced two crucial blocks to keep the hosts at bay, and centre-back partner Harry Maguire were excellent. The pair finished with five clearances apiece, as well as making five interceptions.

Rash fails to make a mark

Rashford had played down concerns over burnout ahead of the fixture, despite missing the initial meeting with Milan with a slight injury. He has also been nursing a shoulder issue.

However, the England international had just 16 touches in the opening half – the lowest total for any United outfield player – before being replaced by Pogba, who had a far greater impact.

- United have progressed from each of their last two knockout ties with Milan in European competition, having been eliminated in each of the four ties beforehand (European Cup in 1957-58 and 1968-69, Champions League in 2004-05 and 2006-07).

- Milan have lost five of their last six home games against English teams in European competition (W1), after going unbeaten in each of their first 13 such matches (W8 D5).

- Henderson has kept 11 clean sheets in just 18 appearances for United in all competitions this season, one more shutout than David De Gea has registered in 29 games.

- Pogba has scored in each of his last two away games against Milan - the previous occasion was when playing for Juventus in April 2016.

United travel to Leicester City in the last eight of the FA Cup on Sunday, ahead of the international break. Milan, meanwhile, are in action in Serie A on the same day, visiting Fiorentina.