Minimum Temperature Dips At Most Places In Kashmir Valley

Barring Qazigund, the minimum temperature dipped across the valley on Friday night, the officials said. 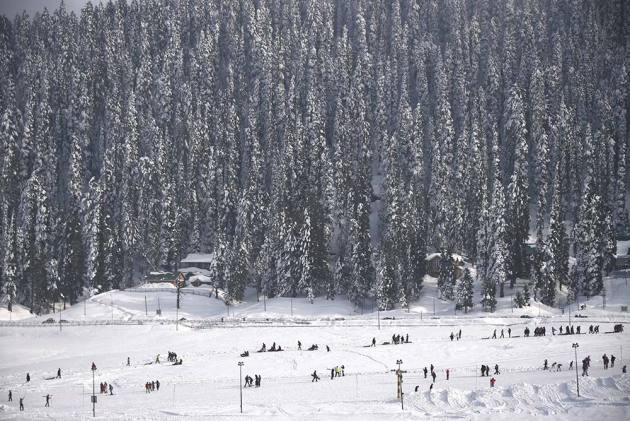 The minimum temperature at most places in Kashmir dipped on Friday night, even as the weatherman has forecast widespread light to moderate rains and snowfall in the Union Territory over two days from Sunday, officials said.

The mercury in Gulmarg settled at a low of minus 6.5 degrees Celsius as compared to Thursday night's minus 5.1 degrees Celsius. The resort was the coldest recorded place in Jammu and Kashmir. While many areas in the valley received snowfall on Thursday, the MeT Office has said a spell of greater intensity than that is most likely to occur over two days from Sunday.

"Another snow spell is likely during 26 (evening) to 28 (forenoon). Due to this, light snowfall up to one inch in plains of Kashmir, moderate – five to six inches -- over higher reaches of J-K, Zojila-Minamarg axis, and light snowfall at scattered places of Ladakh, especially Kargil-Zanskar area and light  rain  is likely at scattered places of JMU region during above period, especially on 27, is likely to occur," the weatherman said.

While the MeT office ruled out any major snowfall as of now, it said there is a possibility of heavy snowfall up to one feet at isolated places over the higher reaches of Jammu and Kashmir during this period. Kashmir valley is currently under the grip of the 40-day harshest winter period known as 'Chilla-i-Kalan' which began on Tuesday.

'Chilla-i-Kalan' is a period when a cold wave grips the region and the temperature drops considerably leading to the freezing of water bodies including the famous Dal Lake here as well as the water supply lines in several parts of the valley. The chances of snowfall are the most frequent and maximum during this period and most areas, especially in the higher reaches, receive heavy to very heavy snowfall. The 'Chilla-i-Kalan' will end on January 31, but the cold wave continues even after that in Kashmir with a 20-day-long 'Chillai-Khurd' (small cold) and a 10-day-long 'Chillai-Bachha' (baby cold).