A 500 crore Mahatama Mandir, a 2000 crore Patel statue, a 65,000 crore bullet train, a bill for compulsory voting that the new Gujarat CM wants to to put on hold... 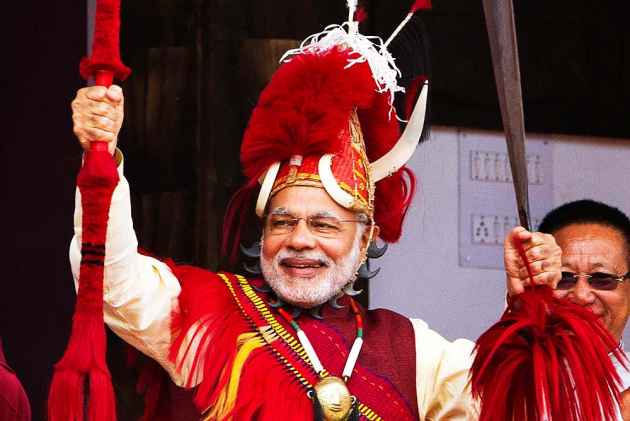 Governments either placate people or subjugate them. The prerogatives of the powerful often override the wishes of the weak. The Gujarat Local Authorities Laws (Amendment) Bill, 2009 which makes voting compulsory in elections to local self-government bodies falls in this category. Cleared by Governor O.P. Kohli, it was gazetted by the Gujarat Government on November 5 this year. Thus voting in civic elections is now compulsory in the state by law. But will it be?

A process initiated by the then chief minister Narendra Modi as part of his brand building exercise in 2009, the Bill is now the law and the man who set the ball rolling is now the Prime Minister. However his successor, Anandiben Patel on whom the responsibility of implementing it rests, is now realizing the enormity of the task at hand.

According to highly placed sources, the present Gujarat government has no intention of opening the can of worms that could add to its woes and has decided to put things on hold. "The process of notifying the Bill will take time as all aspects will have to be studied in detail before it is done," official sources said. The fact is that a legal quagmire awaits it no sooner this is done.

The Gujarat Local Authorities Laws (Amendment) Bill, 2009 is essentially the brainwave of the present Prime Minister Narendra Modi, who had then argued that it would economise the process of local self government elections besides creating the template for exploring similar avenues for a national exercise. The Bill was first tabled in the State Assembly in December 2009. Interestingly, Modi was missing both when the Bill was being debated and later when it was being voted upon. However, he was most vocal, lashing out against the then governor Kamala Beniwal, for what he called playing partisan politics (UPA was in power at the centre).  The governor, on her part, had sent the Bill back for the government’s re-consideration. As Modi was wont to do, he re-introduced the Bill in the State Assembly in 2010, milked it for political mileage for over an year, and then used his brute majority to get it passed on December 28, 2011. Subsequently, it lay with the governor until Modi assumed charge as Prime Minister, ignominiously shunted out Beniwal, and the new Governor cleared it last month.

A political creature to the core, Modi had linked up compulsory voting with 50 per cent reservation for women. The then governor had gone on record to welcome the reservation for women but made it clear that compulsory voting and the provision of penalizing a voter for not doing so was against the spirit of the Constitution and the Election Commission would never agree to it. She had suggested delinking the two issues but Modi was not forthcoming and used the issue to the hilt against the Congress and the UPA government, both in the 2012 Vidhan Sabha as well as the 2014 general elections.

Compulsory elections may not hold much importance for Modi, but compulsory voting for women sure does. In fact, in a different context, the publicity conscious Prime Minister has already sent out instructions in Gujarat that the fact of heightened reservation for women in the police in Gujarat should form the subject of a major advertising blitz countrywide. A hoarding campaign carrying images of Modi and the Gujarat chief minister is expected to be launched soon. Work has already begun on it.

The then governor had advanced her own arguments for sending the Bill back. Her view was that it violated Article19 (1)(A) of the Constitution which guaranteed freedom of expression which also included the right not to vote. Also, she felt, no provision has been made regarding the government’s duty of incorporating all eligible voters in the voter’s list, and distribution of voter’s identity card. Nor was the penal consequences cited, that the voter will suffer if declared a defaulter for not voting. Interestingly, a similar Bill was introduced in Parliament by a BJP MP in 2004 but was rejected after discussion.

There are those who believe—and I do too— that such ‘luxuries’ of political thought ill suits a country whose Prime Minister has to issue a national call on such a basic thing as cleanliness. That Gujarat , a state which is unable to provide toilets in 5000 pre-primary schools and is straining every nerve grappling with such and other absolutely basic amenities, should be thinking of compulsory voting in civic elections, sounds like an absurdity, they say.

Issues, herein, are for real. Those in Gujarat are fully aware that the bulk of its tribal population migrates from its traditional homeland to other parts of the state for livelihood working as daily wage labourers. Does the popular government expect these poverty inflicted people to travel back homewards every time a local election takes place? Or keep returning home for penal proceedings if they fail to turn up for voting?

The Gujarat administration is hard put dealing with the legacy of a crowded timetable of fairs and festivals—agriculture, tourism, garib kalyan melas, school enrolment drives, vibrant Gujarat global investment fairs— passed down by the previous government. Where will it have the time, resources and manpower to undertake such a mammoth operation as this one which begins from the grassroots and covers every part of the state?

It would be better if those in power address grassroot issues rather than spend time building money guzzling memorials to themselves. The Mahatma Mandir in Gujarat—a convention hall built in the name of Gandhi— costs over Rs 500 crores and the Statue of Sardar Patel, twice the size of the statue of liberty, now planned, will incur an expenditure of over Rs 2000 crores. Modi wants history to remember him for such projects. The fact, however, is that toilets are the need of the hour not bullet trains costing over Rs 65,000 crores to build just to travel from Ahmedabad to Mumbai. which costs less than a thousand rupees by high speed Duranto today!