Mizoram: With Tough Challenge From MNF, Can Congress Retain Its Last Fort In NE?

With a tough fight from the Mizoram National Front (MNF), political commentators believe Mizoram is likely to have a hung assembly for the first time. 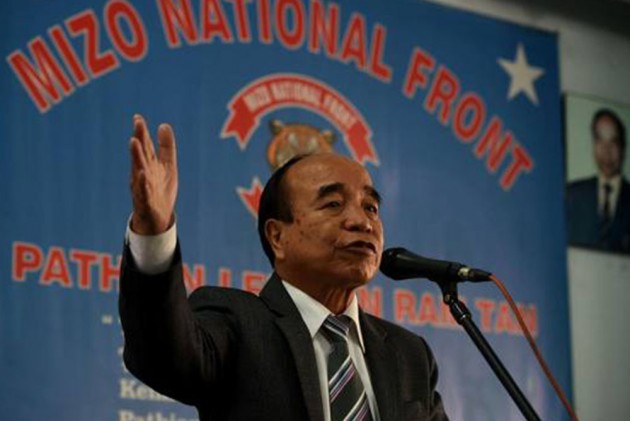 If the exit polls are to be believed, Mizoram is likely to witness a tensed and interesting outcome on December 11 as the Mizoram National Front (MNF) is poised to give a tough time to the Congress in their last bastion in the northeast India. Political commentators have also opined that Mizoram is likely to have a hung assembly for the first time.

Though there is no pre-poll alliance, the MNF led by former Chief Minister Zoramthanga is a part of the NEDA (North East Democratic Alliance), a platform of non-Congress parties of the region formed in 2013. Since NEDA has allied itself with the BJP-lead NDA, the saffron party may come into play in the 'game of thrones' even if it is unlikely to win many seats on its own.

BJP has already proved this a number of times in the neighbouring states. "Not winning many seats" is not an issue but managing the anti-Congress forces has been the USP for the saffron party.

Senior journalist and political commentator Samudra Gupta Kashyap, who has covered the elections in Mizoram for decades, said that for the first time Mizoram has seen a four-cornered contest – Congress, MNF, Zoram Peoples Movement (ZPM) and the louder entry of the BJP.

“In a normal scenario the non-Congress votes will split, so Congress should gain. But among the youths like any other state, there is a need for change. Now the question is who will provide the change. The youngsters have been fed up with the old faces. Though ZPM promised to bring that change, but it does not have a very good foundation. And Mizos being a very close-knit community, the youngsters generally don’t defy their parents,” Kashyap told Outlook.

MNF is a regional force, and wants to gain more votes by not allying with the BJP.

“BJP also wants MNF to come up so that they can support from outside. Even if the Congress gets the majority but doesn’t reach the mark like Meghalaya, the BJP will cover up remaining 21 and make a break within Congress bringing four or five people. This too can happen. But ideally it’s going to be a hung house for the first time,” Kashyap added.

It will be very difficult for any party to reach the magical figure of 21 in the 40-seat assembly. Apart from that, four senior Congress leaders leaving the party would work against the party. Though exit polls suggest Congress might lose the state, it won't be a clear mandate in favour of the MNF too. In such circumstances, the role of the ZPM will be crucial which has fielded 37 candidates and is expected to win at least five to six seats.

Many have predicted ZPM leader Lalduhoma, a former IPS officer who worked with former Prime Minister Indira Gandhi, can be the kingmaker. In 2013 elections, Congress won 34 out of the 40 seats and 32 in 2008. Prior to that, the MNF ruled the state for 10 years since 1998.