The auction had little real-time action after, as I was told most auctions are; but the setting more than made up for it. 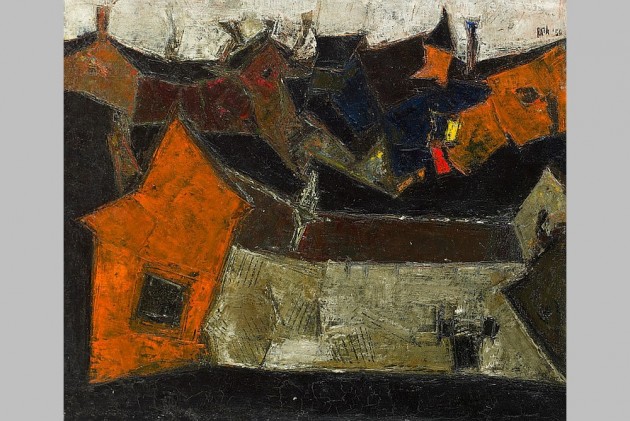 Arriving late for an art auction (in this case Saffronart's Modern Masters Auction), I now know, can never be good. For one, the drinks that might carry you through the drudgery of people— tediously spending, investing their money, are gone— and two, you cannot find a seat. Luckily for me, I arrived just in time to witness a fierce battle for a KH Ara, 'seated nude', gouache on paper, dimension 29.25 x 21.25 inches.

The auctioneer, Hugo Weihe, also the chief executive officer of Saffronart, had little time to breathe between announcing "aaaannnnnnnddddd INR 8.5 lakh from the lady on my right, aaannnddd INR 9 lakh from the gentleman at the back". Increasing the anticipation was a bidder on the phone, prolonging the battle, until the bidder bid us adieu, and at INR 14.5 lakh, the gentleman at the back put his tireless hand down, and Weihe made the final "are you sure, you've come this far. I'm putting it down, fair warning, aaannddd sold to the lady on my right, ballot number 356"! Ballot number 356 bought the next KH Ara too, this time for INR 6 lakh, discounting buyer's premium.

The auction had little real-time action after, as I was told most auctions are; but the setting more than made up for it. Walking into the palatial halls of the Leela Hotel with chandeliers that qualify as expensive art themselves, surrounded by art of all the masters is a feeling that can best be described as surreal. I did not have the pleasure of meeting a lot of art lovers, but there were plenty of smart investors, at least at the back, where I stood, and heard someone say of Rameshwar Broota's 1941 untitled, oil on canvas, "this looks like my biology book".

The Akbar Padamsee's 1941 'Greek Landscape' I missed, a Lot which broke the world record for the artist, selling for a whooping INR 19.19 crores, but was there for the next best bid of the evening — VS Gaitonde's untitled, oil on canvas, which after little deliberation went for INR 10.12 crores, a painting which many I stood around seemed to understand little off, and believe that they could have made as easily.

The Souzas, Husains, Razas, Sabavalas, Khannas and Mohamedis all did well. Many bids fell below the base price, many went soaring above, but at a time when the art market is considered at a low, the night made a whole of INR 68.55 crores, against the presale estimate of INR 62.1 – 87.8 crores, and 79 of 87 lots were sold. If I could, I would have liked to bid for Raza's 1956 'Village', a rare pre-bindu work by the artist I had the pleasure to meet not once, but thrice, and watch effortlessly painting at 94. I lost it to another "gentleman at the back", who bought it because "it would have great resale value in just another three years".

Nevertheless, I'll let it go, for all the art atmosphere, old paint smell, and great couture that the evening had to offer. It was a great collection, and we'll accept everything that comes in the package with open arms (although the guard stationed at each painting made sure even a bit of us came nowhere close).