Modi Attempts To Turn Pakistanis Against Their Rulers

And he called Pakistanis for a fight — to end poverty, illiteracy, unemployment and infant mortality 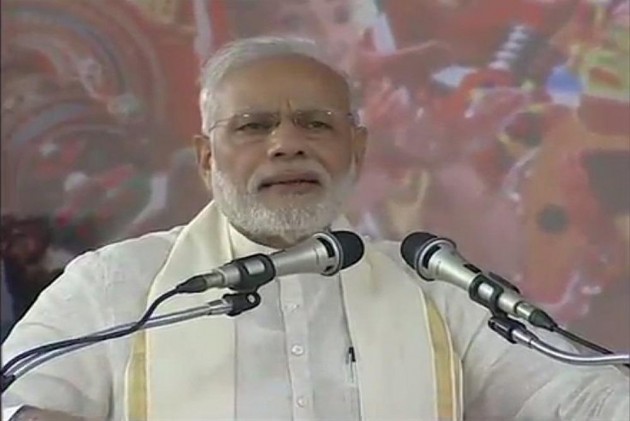 There were great expectations for warmongers from Prime Minister Narendra Modi and he did disappoint them during his speech at a rally in Kerala.

Post Uri attack by militants that killed 18 Indian soldiers, some of them in their sleep, there were calls for a retaliatory attack on Pakistan. And Prime Minister Modi was expected to give insights into the decisions taken during his meeting with ministers and army chiefs over the last few days, during his visit to the coastal town of Kozhikode for the BJP's National Council meet.

And he did reveal his mind with a clever splitting of the most important sentence of his speech — satisfying the hawks first and the doves later.
In his thundering voice, he said: "I am calling Pakistan for fight, a fight to end poverty, unemployment, illiteracy, infant mortality.
"Let's see who wins first," he said.

Modi, without the use of notes, spoke directly to his immense audience punctuated by near-perfect Malayalam translations.

After his initial niceties to the audience, he began pounding Pakistan slowly. He first offered Pakistan the comfort of anonymity while describing its "atrocities on India", qualifying it first as a country in Asia, then "our neighbor" and later took the neighbour's name.

He reproduced his much-loved comeback at Pakistan to shame the neighbour.
"One country in Asia is exporting terror to the four corners of the world," he said.

His speech had an agenda. He tried to underplay the armed forces failure in stopping the Uri attack by spotlighting the uncelebrated successes of the soldiers in thwarting, what he said, "17 infiltration bids over the last few months."

He said: "In the last few months, our soldiers have killed over 110 terrorists, the highest in recent years".

He then sang a different tune, by distinguishing the state from the nation. And sicced the people of Pakistan on the rulers.

He exhorted Pakistanis to ask its government, when India is exporting software, why is Pakistan exporting terror.

Modi then tried tugging at their heart.

"I want to remind the people of Pakistan that before partition, your forefathers too used to respect this land," said Modi.

Probably worried that he was sounding a tad too dove-ish to his listeners who were expecting a clenched fist and sharp tongue-lashing for Pakistan, he had this: "Sacrifice of our 18 jawans will not go in vain. We will leave no stone unturned to isolate Pakistan in the world."

After hitting the crescendo, Modi made a climbdown by appealing to the audience to make his pet dream— Swachh Bharat — a success.