While the Prime Minister is now exhorting the nation to set new standards in sanitation, his own record in Gujarat leaves much to be desired. 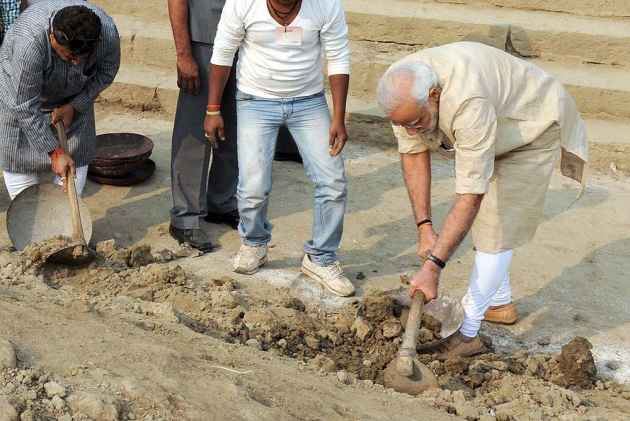 Offices of power are often breeding grounds of indestructible myths. And since the flavour of the current Indian season is Gujarat, focus is bound to be on this ‘model’ laboratory where Prime Minister Narendra Modi perfected the alchemy of success.

Like the legendary King Midas whose touch turned everything into gold, Modi possesses the uncanny ability of turning anything he propounds into a national crusade: whether it is Sardar Patel’s statue or the nation’s state of sanitation.

With the Gujarat model elevated to the status of a ‘Bible’ for administrators after BJP came to power in the country, the performance audit carried out by the Comptroller and Auditor General of India (CAG) on implementation of the sanitation campaign in Gujarat during the period 2008-13 (Modi rule) provides proof of how reality is clouded to forge myths and then build castles on it. The CAG report was tabled during a truncated two day session of the Gujarat Vidhan Sabha last week on November 11 this year.

Interestingly, the Total Sanitation Campaign (TSC) was launched by the Atal Bihari Vajpayee-headed NDA government in 1999 for sustainable reforms in the rural sector through a time bound campaign mode. Subsequently, in 2012 it was renamed as ‘Nirmal Bharat Abhiyan’ by the Manmohan Singh led UPA government.

While the Prime Minister is now exhorting the nation to set new standards in sanitation, his own record in Gujarat leaves much to be desired. According to the CAG, 5000 ‘anganwadi’ centres and 4000 schools do not have toilet facility. This despite the Supreme Court having asked for separate toilets for all schools by 2012.

No baseline surveys were carried out as mandated for preparation of project implementation plans and though there was no dearth of funds, the expenditure against it ranged between 43 and 60 per cent during 2008-13. The award money received from the centre under the Nirmal Gram Puruskar Scheme was not distributed to award-winning gram panchayats. Fudging was also noticed as the sanitation coverage in the state was only 46 per cent which was much lower than the progress reported by the department. Toilets constructed at the cost of Rs 2.80 crores could not be put to use due to inferior quality of structure and even lack of a soak pit,  it noted.

The report also provides an insight into how funds were sought to be diverted for Modi government jamborees and the amount budgeted in sanitation awareness creation. “The government stated that buses were hired for transportation of public for krishi mahotsav and as awareness of sanitation and waste management was provided here so the expenditure was booked under IEC activities. The reply was not acceptable”, it pointed out, adding that “the individual household latrine targets had been inflated as the progress reports were generated on funds released instead of on actual construction”.

The Report also busted an oft-propagated Gujarat government myth that manual scavenging has been totally eradicated. “As per the census 2011 report, manual scavenging is still continuing and 1408 cases exist where nightsoil is being removed by human beings and 2593 cases by animals in various rural areas of Gujarat”, says the CAG report on rural bodies for the year ending March 31, 2013.

“Construction of Houses under the Indira Awas Yojna (IAY) were to be completed within the maximum time- limit of two years. In test- checked talukas against a target of 85,063 houses 16,722 during 2008-11 remained incomplete. The achievement did not represent a true picture as figures were not mentioned and incomplete houses were shown as complete”, the report said.

The sad part is that the state’s share of funds under the Sarva Siksha Abhiyan (SSA) was curtailed because the Gujarat Elementary Education Council did not use the allocated funds. This was the period ending March 2013 when Modi had gone to town against the centre alleging injustice and choking of funds. Records state that Gujarat incurred a loss of Rs 296.34 crores as central assistance for development as it forfeited the general performance grant for failure to comply with rules under the 13th Finance Commission. “The state government needs to investigate its educational system as many students are still deprived of their rights to education in Gujarat”, it said, while pointing out that the data available in government records was ‘not reliable and inflated”.

According to the CAG report, the model state did not have a single teacher in 57 government primary schools and only one teacher each in 383 schools. Similarly, in 223 upper primary schools, there was no teacher and 678 ones had only one teacher each. In every school with a student strength exceeding 150, a head teacher is needed and in the period under review there were 4262 vacancies against a total requirement of 9262 head teachers. Chronic shortage of amenities in government schools has seen parents shifting their children to private schools which is seen by an increase of 55.87 per cent in the number of unaided private schools between 2008 to 2013.

How much importance the state government gives to the CAG is evident from the fact that though the report was sent to the state government with its observations and suggestions in August 2013, no reply was forthcoming till March 2014. This is not an isolated case, for, almost the entire period of Modi rule in Gujarat was replete with instances of inordinate delay in response which led to the entire exercise becoming redundant.

This, incidentally is the same lineage of authority which had busted the numerous scams of the previous government in Delhi. As far as the Modi government in Gujarat is concerned, this is just one among a mountain of myths, buried in government records, that has seen the light of reality. Many more await an opportune time for exposure. After all, the memories of men are too frail a thread to hang history from!