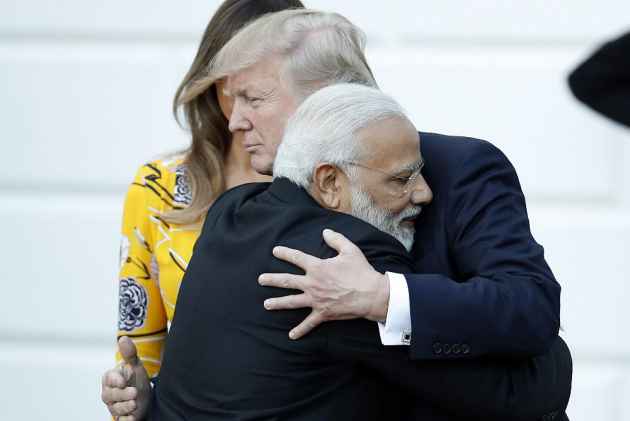 Prime Minister Narendra Modi and US President Donald Trump will have a bilateral meeting on Monday on the sidelines of the ASEAN summit in Manila, reported The Indian Express.

It will be the first meeting between the two leaders following a proposal to have a quadrilateral alliance among India, the US, Japan, and Australia.

Japan last month had indicated that it would propose a top-level dialogue with the US, India and Australia. Sources said officials of the four countries may meet on the sidelines of the ASEAN summit here.

Reacting to the Japanese move, India had said that it was open to working with like-minded countries on issues that advance its interests. The US had said it was looking at a "working-level" quadrilateral meeting in the near term with India, Japan and Australia.

Japan's Foreign Minister Taro Kono last month had said that Tokyo favours a dialogue between Japan, the US, India and Australia to further boost strategic partnership among the four countries.

The move to set up the quadrilateral comes in the backdrop of growing Chinese assertiveness in the South China Sea. The US has been favouring a larger role for India in the strategically key Indo-Pacific region.

The use of the term "Indo-Pacific" by Trump has led to speculation that it may have something to do with Washington preparing the ground for a revival of the so-called Quadrilateral strategic alliance between the US, Japan, Australia and India to counter China's rise.

In their meeting, Modi and Trump are likely to discuss a host of key issues of mutual interest including the security scenario in the region.

Trump yesterday praised India's "astounding" growth after it opened up its economy and also lauded Modi, saying he has been working successfully to bring the vast country and its people together.

Speaking at a gathering of CEOs on the sidelines of the annual Asia-Pacific Economic Cooperation (APEC) summit in the Vietnamese city of Danang, Trump cited India as one of the countries in the Indo-Pacific region making strides.

He praised India as a sovereign democracy with a population of over 1 billion as well as the largest democracy in the world.

Modi is expected to meet many other leaders attending the two summits.

He will also participate in the ASEAN business and investment summit as well as a meeting of leaders of Regional Comprehensive Economic Partnership (RCEP).

The RCEP, comprising the 10-member ASEAN bloc and six other countries -- India, China, Japan, South Korea, Australia and New Zealand, is engaged in negotiations for a free trade pact.

In his maiden visit to the Philippines as prime minister, Modi will also attend a reception by the Indian community and visit the International Rice Research Institute (IRRI) and the Mahavir Philippines Foundation.