Interest Of Both India And China To Have Good Relations: Modi And Xi

This is the prime minister's last official engagement before flying off to Myanmar on a bilateral visit. 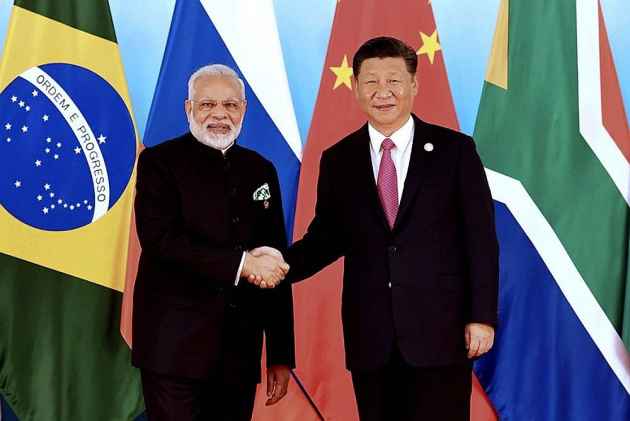 Prime Minister Narendra Modi and Chinese President Xi Jinping today held their first substantive bilateral meeting after the Dokalam standoff and reaffirmed that maintaining peace and tranquillity in the border areas was a pre-requisite for ties to move forward.

Modi, who attended the BRICS Emerging Markets and Developing Countries Dialogue earlier in the day, met Xi on the sidelines of the 9th BRICS Summit here.

There was a forward-looking and constructive approach taken by both sides during the over an hour-long meeting between the two leaders, Foreign Secretary S Jaishankar said while briefing reporters on the Modi-Xi bilateral meet.

Prime Minister Modi and president Xi felt that there should be closer communication between the defence and security personnel of India and China, Jaishankar said.

The two leaders reaffirmed that it is in the interest of both India and China to have good relations, he said.

During the meeting, both Modi and Xi reaffirmed the understanding reached earlier this year at Astana between them to not allow differences to become disputes.

They felt that peace and tranquillity in the border areas is a pre-requisite for ties to move forward, Jaishankar said.

Asked if the Dokalam standoff had been left behind by the two sides, he said, "It was a forward-looking conversation and not a backward-looking one."

In his initial remarks during the meeting, Modi congratulated Xi on a "very successful" BRICS Summit, saying the conference had been a success in making the grouping more relevant in a fast-changing world.

China is willing to work with India on the basis of the Five Principles of Peaceful Coexistence (Panchsheel), which were put forward by both the countries, to improve political mutual trust, promote mutually beneficial cooperation, and push Sino-India ties along the right track, Xi was quoted as saying.

The meeting came amid diplomatic efforts by the two sides to overcome the bitterness caused by the 73-day face-off between their troops in the Dokalam area of the Sikkim sector.

The Chinese and the Indian troops were engaged in a standoff since June 16 after the Indian side stopped the construction of a road by the Chinese Army.

On August 28, India's External Affairs Ministry announced that New Delhi and Beijing have decided on "expeditious disengagement" of their border troops in the disputed Dokalam area.