MPs, Beware. Government Has Given Irrelevant Answers To Your Questions In Parliament

At least five questions raised by MPs during the current session where the government has given irrelevant answers. In all these questions, the MPs sought information related to demonetization. 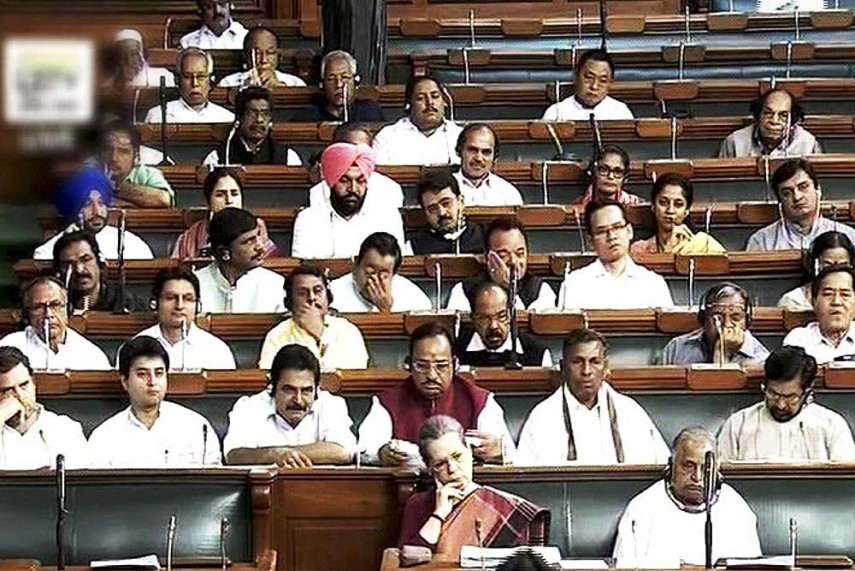 It is not just the Reserve Bank of India (RBI)  that has time & again refused to disclose information related to the demonetization, various ministries of the Government of India have given irrelevant answers to the questions raised by Members of Parliament (MPs) both in the Lok Sabha and the Rajya Sabha. Factly found at least five (5) questions raised by MPs during the current session where the government has given irrelevant answers. In all these questions, the MPs sought information related to demonetization.

Why was Hyderabad RBI branch not chosen for exchange of old currency by NRIs?

In the Rajya Sabha, YSRCP MP  Vijaysai Reddy and CPI MP D Raja wanted to know why the NRIs & Indian Gulf workers from AP & Telangana have to travel to Chennai to deposit their old currency notes. They also wanted to know the reasons for not designating the Hyderabad RBI branch, one of the large RBI branches for exchange of old notes by NRIs. They also asked the steps proposed by the government to ease the hardships and expense of Indian gulf workers who wish to deposit their old notes. In response, the Minister of State for Finance, Arjun Ram Meghwal had a standard answer that mentions the names of the five RBI branches that have been designated to deposit old notes during the grace period. He did not answer the core questions raised by both the MPs about Hyderabad not being chosen and the steps being taken to ease the hardships. 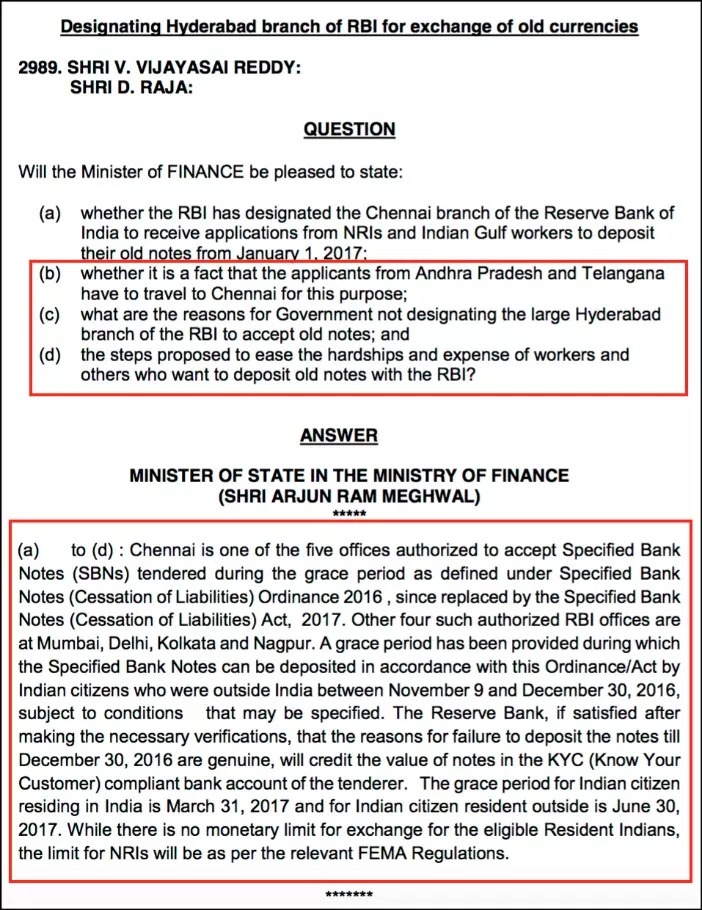 What is the total cost incurred by RBI in printing the new 500 and 2000 rupee notes?

In the Rajya Sabha, Congress MPs Ambika Soni & Subbirami Reddy wanted to know the total cost incurred by RBI in printing the new 500 and 2000 rupee notes. This was one of the four questions asked by them. In his written response, the Minister of State in the Finance Ministry, Arjun Ram Meghwal spoke about everything from how the RBI has made adequate arrangements for supply of notes to how the notes are being continuously printed except answering what was asked. 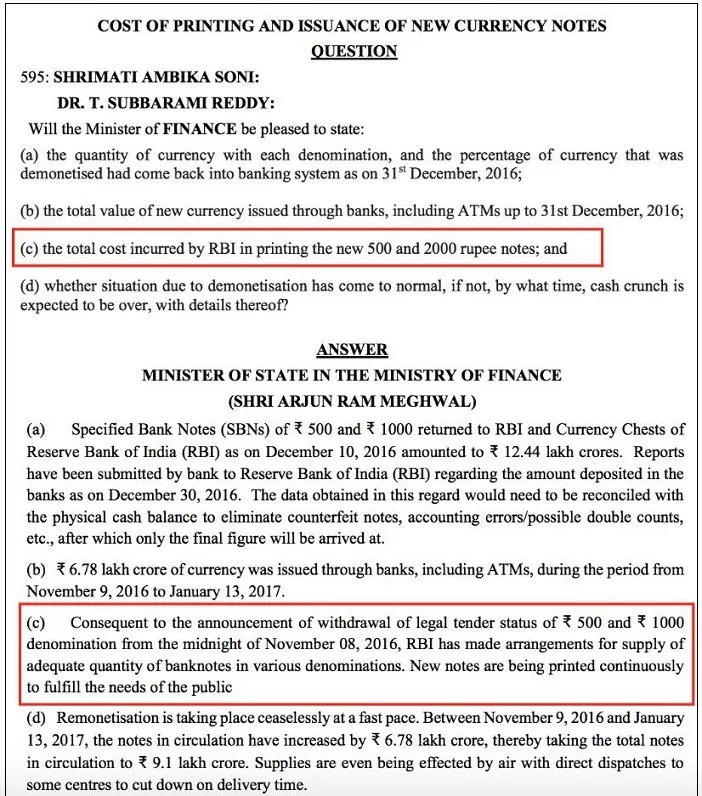 Is the Government considering to issue directions to Doctors to receive fee in cashless mode?

The response to this question was even more funny. Samajwadi Party MP in the Rajya Sabha, Naresh Agarwal asked the government if it is considering to issue directions to doctors to receive their fee in cashless mode in order to prevent the hoarding of black money. In his written response, the Minister of State in the Ministry of Health & Family Welfare, Faggan Singh Kulaste spoke about how the Indian Medical Council (Professional Conduct, Etiquette and Ethics Regulations, 2002) mandate a physician to clearly display his fees and other charges on the board of his chamber. It has to be noted that the question was neither about the physician charges nor about the transparency in charges. But the entire answer was about how a physician should be transparent with his fees etc. There was no mention of cashless mode which was the original question. 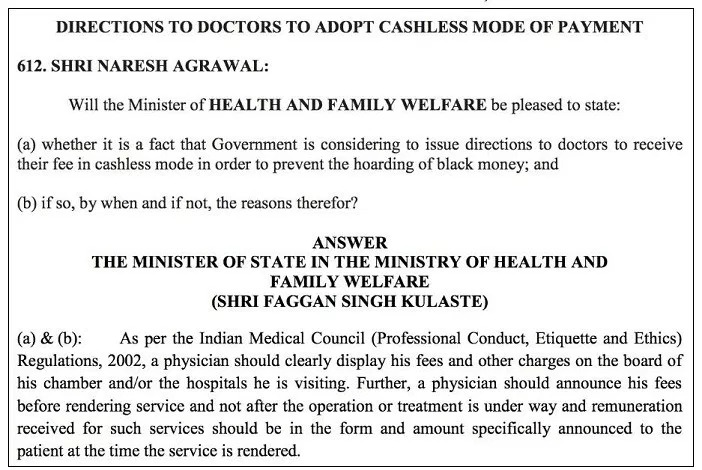 How much new currency was distributed to each State & UT?

Rajya Sabha MP from DMK, Kanimozhi wanted to know the total amount of currency circulated by the RBI in the two months after demonetization (November 10th, 2016 to January 10th, 2017). In addition, she wanted to know the total value of currency distributed to each State and Union Territory during this period. In his written response, the Minister of State in the Finance Ministry, Arjun Ram Meghwal said that Rs 6.78 lakh crore of currency was distributed to various States and Union Territories during the period from November 10, 2016 to January 13, 2017. For reasons unknown, he chose to ignore the second part of the question. 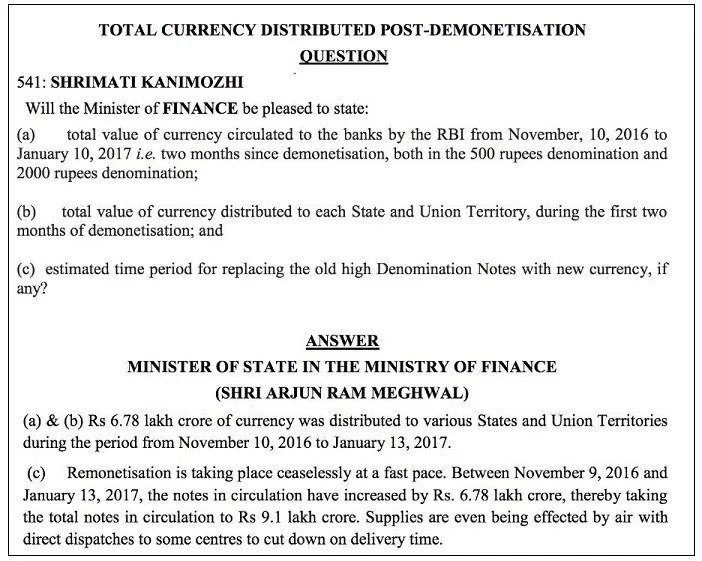 Ratio in which the Rs. 500 and Rs. 2000 notes were distributed between public and private sector banks 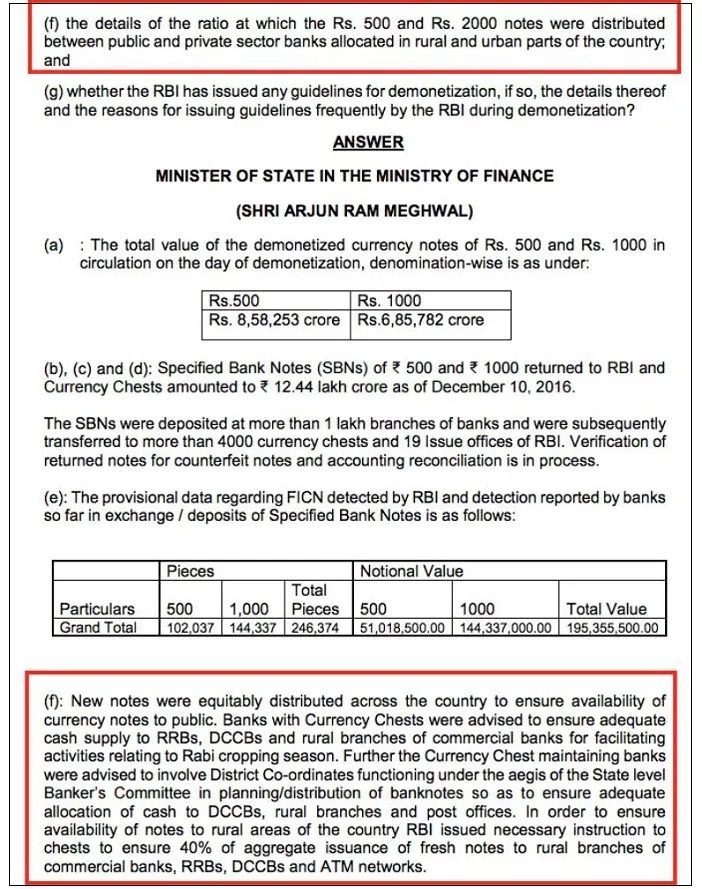 Congress Rajya Sabha MP, P L Punia sought the details of minutes and agenda of the meeting of Board of Directors of Reserve Bank of India and the copy of Cabinet Note placed before Cabinet in respect of demonetization announced on 8th November, 2016. In his written response, the Minister of State in the Finance Ministry, Arjun Ram Meghwal spoke about the agenda of the meeting, but neither disclosed the minutes of that meeting nor provided a copy of the cabinet note. 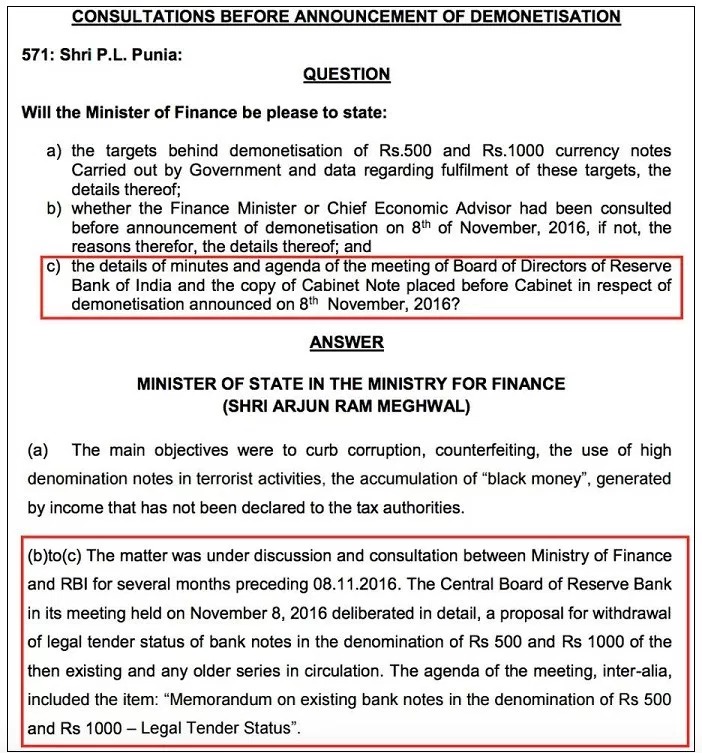 Reasons for Steep rise in bank depsoits in September & October 2016 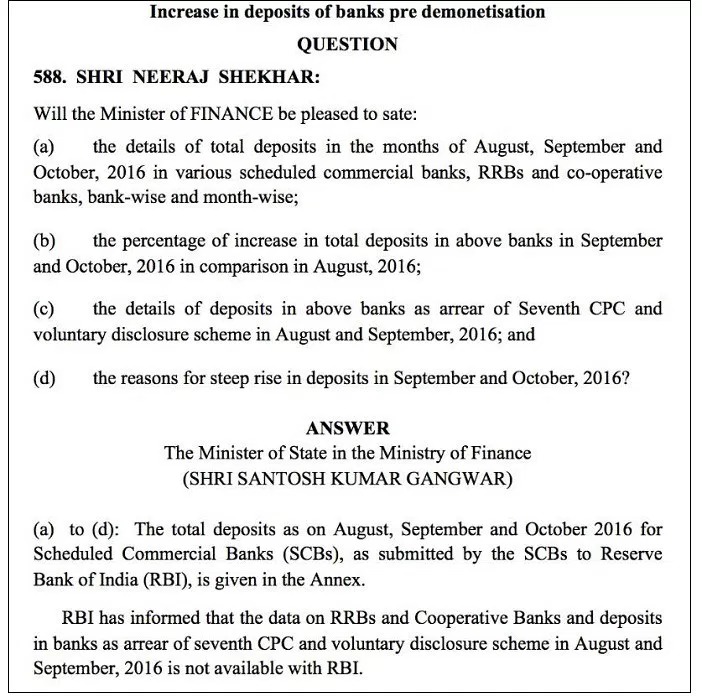 (This article was originally published in FACTLY, and has been cross-posted with permission.)