So now that we have “centre mein Narendra, state mein Devendra,” it is time to remember that the two share little except the rhyming name 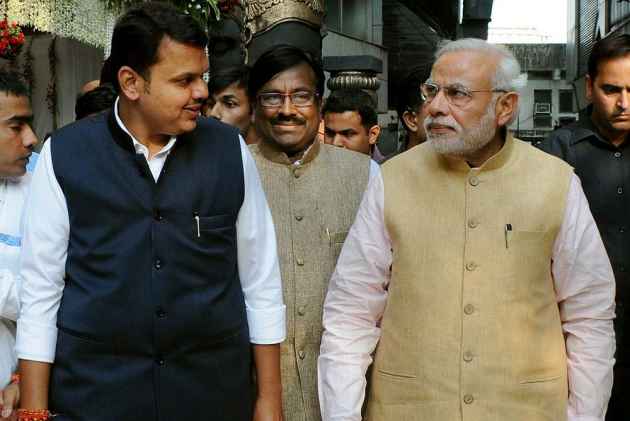 Earlier this year, on July 22, Aam Aadmi Party leader Anjali Damania, while wishing Devendra Fadnavis on his birthday mentioned to him that he shared it with none other than Ajit Pawar. The response was prompt: Since Pawar is 12 years older,  Fadnavis said, they are poles apart.

If perceptions and brand images are anything to go by,  Fadnavis could not have been more right.  The first BJP chief minister of Maharashtra is riding on a “clean image” wave.  Ironically former Congress CM Prithviraj Chavan too had the same clean image, though he was eventually perceived as inefficient.

Although contenders such as Nitin Gadkari, Vinod Tawde and, if you like, Pankaja Munde, were always there, no one was surprised to know that  Fadnavis was the final choice.  For the past few months, a common refrain in Maharashtra has been “centre mein Narendra, state mein Devendra”. Except the rhyming name, there is little that the second youngest chief minister of Maharashtra shares with PM Narendra Modi, and yet he complements him like nothing else.

(At 44, the new incumbent also happens to be the second youngest and second Bramhin CM of the state—Sharad Pawar at 38 in 1978 remains the youngest while Shiv Sena's Manohar Joshi was the first Brahmin CM of Maharashtra.)

His Twitter profile has Modi and him. He retweets Modi’s posts diligently and he even told Outlook earlier that people wanted a CM nominated by Narendra Modi. Modi’s development agenda is his way of life too, as explains on his website: “Politics to me is an instrument to bring socio-economic change in the lives of people.”  And, people, across party lines, seem to support this image.

“I have files of scams of so many ministers, even BJP leaders, but I don’t have anything against Devendra,” says Anjali Damania. “During the IAC campaign I had given so many papers to Devendra and he always raised those issues in the Assembly. I wish him well and I hope he is able to deliver what he has promised but I wonder if the other leaders in his party will help,” she says.

Winner of Commonwealth Parliamentary Association's "Best Parliamentarian Award" in 2002-03,  Fadnavis has a formidable resume. He was the second youngest mayor in India, when he took charge of Nagpur city in 1997. A lawyer and a management professional with two books under his belt—one about how to read the state budget, Fadnavis is that clean-shaven modern face that the young voter, smitten by the growth and development agenda, is looking for and identifies with. (He has also modelled for a clothes brand!)  Not to mention that his wife Auta Ranade (now Fadnavis) is an associate vice president with Axis Bank and is likely to continue with her job from the chief minister’s residence: Varsha, Malabar Hill.

Says Bhanu Rajgopalan, an advertising professional: “Since I was his elder brother’s classmate, I have known him probably since he was 4 years old. In school, he showed promise when he used his oratory to succeed in debates. However, the real persona came out when he was studying law and he emerged as a fore-runner in all public speech and oratory competitions. I got a chance to meet him when he was the Mayor of Nagpur for some work, in the Mayor’s office. I was pleasantly surprised to see the speed and focus of his work. There were so many people who had come to meet him with their issues and he was patiently listening and solving one issue at a time. The best part was he always knew how to get work done for the people from the administration and create a happy and win-win situation.”

However, his RSS background cannot be shaken off.  His father was close to MG Vaidya, RSS ideologue in his 90s. “Since he started his political career very early, he did not shoulder many responsibilities in the Sangh. But his father was close to me and we worked together in the 1960s. I have attended his father’s and his wedding. He is a capable person,” says  Vaidya, adding that he doesn’t know him as well as he knew his father.

After the demise of Gopinath Munde, several analysts pointed to the absence of a mass leader in state BJP—or entire Maharashtra, for that matter—requiring the PM himself to address as many as 27 rallies for assembly elections. But many also believe that  Fadnavis’s diplomacy has paid off. “He is a measured speaker. Although there are cases of rioting against him, he has never been caught for any scam. He has been at the right place at the right time. But whether this greenhorn is able to combat the pressure of administration, we do not know,” says Sujata Anandan, a senior journalist and political editor, originally from Nagpur.

Pressure there will be. According to India Spend, 57% of MLAs in the present assembly have criminal cases against them. Outside “unconditional” support of NCP is viewed as an attempt to ensure no criminal proceedings against its tainted ministers. It will only make things challenging for Fadnavis if he wants to keep up with his clean image and promise of corruption-free governance. All the irregularities—be it irrigation, power generation or agricultural subsidies/loan waivers, which the BJP was so prompt and thorough in bringing to the fore, will now have to be dealt with. Not to mention the feverish development promised by Modi to one and all.

And most important of those challenges may turn out to be Fadnavis’ own support for separate statehood for Vidarbha. Anandan says that in the absence of an absolute majority, the BJP cannot risk taking a step towards bifurcation because Sena and Congress will both take to the streets making it impossible for the BJP to run the government smoothly.

“BJP has won this election because of 44 MLAs from Vidarbha and a promise that a separate state would be carved out. But I do not see that happening. Until now preference was always given to western Maharashtra because we did not have representation. Now we do. Let us see what he is able to do for the farmers of this region,” says Vijay Jawandia, a senior farmers’ activist.

Former Congress MP from Nagpur Vilas Muttemwar says the party got “ek teer mein do nishan”: “First they promised Vidarbha and then after winning they gave chief ministership to a man from Vidarbha. So now they won’t be able to separate the state, and this is the third time they have promised and backtracked. However, people will feel they are being represented. It suits them fine.”

However, even Muttemwar agrees that Fadnavis is committed to the development of the region. But, he cautions: “Today’s generation has no patience. It is like a game of 20-20 Cricket. They want everything now. They have been promised a lot of things by Modi at centre and in state.”

Fadnavis clearly has his job cut out.